The recent devastation of Hurricane Matthew was especially hard on the third-world country of Haiti. But even in a hurricane, there are places to see the light amongst the bad. Several Haitians are alive today thanks in no small part to loving people combined with the ingenuity and effort found in agriculture.

Sukup Manufacturing has made a name for themselves through high quality grain bins across the United States, but a different kind of product has been on display in Haiti in recent years. Called Safe T Homes, the buildings are converted grain bins described by Sukup as “quick and easy to construct” and “engineered structures that are suitable for all phases of recovery effort.” They’re a mighty contrast to the houses normally found in Haiti, which are built with questionable rebar-less concrete walls and flat sheet metal as a roof.

The Safe T Homes are said to offer certain qualities like fire- and termite-resistance, and, as recently displayed by the destruction of Hurricane Matthew, weather-resistance. 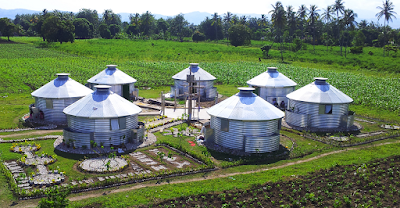 “When Hurricane Matthew hit, the eye of the storm was just to the west of where our facilities were located,” van Gorkom said. “The hurricane came up from the south and we took a direct hit. And we’re very happy to say that all of our Safe T Homes, which is nearly 200 in Haiti now, are still standing. They were engineered properly by Sukup Manufacturing and performed as they were designed to perform.”

In 140-mile-per-hour winds, every single Safe T Home was left standing — a major contrast to other southern portions of Haiti. The BBC reports aid workers have noted 90% of certain regions, many in the south, have been destroyed.

Converting grain bins into houses?  That's pretty ingenious.  I understand they get hot in the summer, beneath Caribbean sunshine, but that's going to happen whatever sort of house you have.  If they can be insulated against heat and/or cold, they'll certainly be more durable than traditional knocked-together tin shacks or mud huts.  I don't know about their cost, but they've got to be easier to erect in place rather than truck old, unused shipping containers to where they're needed.

They are houses in the tropics without air conditioning. They will be hot.

Hell, the other way would be to turn those large rectangular concrete box culverts into homes. Some culvert manufacturers already have modified versions for using as storm shelters (some up to over 200 people capacity.)

Anything has to be better than the modern version of 'wattle and daub' that most poor people in the tropics use.

Hurricanes and other storms are quite common in the tropical conditions Haiti is in, but so is heat. If you’re thinking the structures would seem hot, you’re not the only one. Van Gorkom noted that as the most common question he gets. Fortunately, an ingenious design has allowed the indoors of the grain bins to be relatively cool with a double layered roof system and other clever modifications not found on the everyday grain bin.

“We wanted to ventilate it as much as possible. There’s also a heat shield as we call it. We attach that to the top of the roof sheets and it acts as a barrier so that the sun isn’t hitting on the actual steel roof. Of course it doesn’t make it air conditioned, but ironically it’s like standing in the shade. We did some tests — it does reduce it about 10 degrees. So if it was 100 degrees out, it was 90 degrees in the Safe T Home,” Poppen said. “It really made a difference.”


Seems the manufacturer really thought out this whole thing. Heck, this is good old American can-do culture at the finest.

A quonset hut is hot, but many vets lived in them.

I'm a former sailor, & have seen a couple of hurricanes. If these folks had seen what tornadoes do to grain bins & silos here in TN, they might reconsider this idea.
--Tennessee Budd

If you extended the roof out,4 feet or so, you could shade the sides and make the interior cooler (giving some outdoor living area as well)...TX

The double skinned roof is an old idea. The outer panel heats up and the air between it and the inner panel convects upwards and out of the vents on the ridgeline, drawing cooler air in from the edge of the roof.

Land Rover had such an arrangement for the vehicles it sold in Africa and other tropical regions and I know that in pre-electricity and air conditioning units in the southern states, a similar arrangement was used.

If the chimney like structure is also open to the inside, then they would be tolerable, if not exactly as cool as a fully air conditioned unit.

Wind slides around a curved structure instead of pushing on the side. That's why Geodesic domes and yurts hold up so well in high winds. Having lived in a 20-sided polygon, high winds are not that big of a deal, once you get used to the 'boom' that happens when the wind 'slaps' back together on the downwind side of the building. Round buildings are easier to heat and cool since the air circulates better in them than boxes.

I had a Landrover with double roof in Costa Rica. Worked pretty well.

Even with the steps of insulation and ventilation, I'm guessing tropical sun makes it pretty uncomfortable. Growing some vines along sides and top would be good solution for keeping sunlight off of metal (though may add a bug problem).

All in all though - good idea. Designed for owner construction using low tech tools, perfect for Haiti.

I wonder if they intend selling those here in U.S. - make for a good hunting cabin design.

Not a new idea (that does not make it a bad idea, of course) - Hugo Junkers also constructed all metal houses for remote locations after the Nazis took his company away.
There are still some in existence, but I never found pictures of them in their original location.