After a weather postponement, the US auto industry's woes deepen


In July last year, I pointed out that the US vehicle manufacturing industry was in serious trouble.  In a second post the same day, I provided pictures of vehicles that could not be sold, stored in hurriedly rented parking lots all over the country.

The hurricanes that struck the US during the second half of last year provided an unexpected breathing space for the auto industry, with over 600,000 vehicles damaged or destroyed.  Many had to be replaced.  This absorbed some of the industry's overproduction stockpile, and staved off short-term problems.  However, the "weather bump" is over, and the problems are returning in full force.  Bloomberg reports:

Growing numbers of small subprime auto lenders are closing or shutting down after loan losses and slim margins spur banks and private equity owners to cut off funding.

As of the end of September, there were about $280 billion of subprime auto loans outstanding, according to the Federal Reserve Bank of New York ... There isn’t a standardized definition of subprime borrowers, though it generally encompasses borrowers with FICO credit scores below 600 to 640 on an 850 point scale. 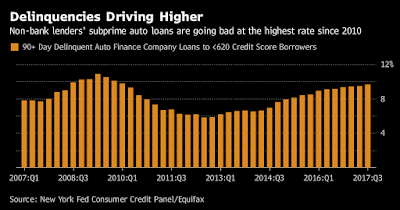 Years of loose lending have resulted in growing numbers of subprime borrowers falling behind on their bills. In the quarter ended September, 9.7 percent of loans that auto-finance companies made to the riskiest borrowers were overdue by 90 days or more, according to a study last year by the New York Fed. That’s the highest percentage since 2010. The weakness is making it more expensive for some subprime auto lenders to package loans into bonds, though none of the companies that recently closed or filed for bankruptcy have issued such securities.

It’s a cycle the subprime auto industry has seen before. From 1997 to 1999, 41 lenders filed for bankruptcy, shut down or were acquired as losses from bad loans piled up, according to Moody’s Investors Service.

For this cycle, easy money may have spurred lenders to be looser in their underwriting or fail to properly vet borrowers’ incomes, said Colonnade’s Gillock.

Last year I pointed out:

Put in its simplest terms, most US households currently have significantly less disposable income, in terms of the buying power of their money, than they had in previous decades.  Therefore, while auto prices may have held reasonably steady in inflation-adjusted dollars, the incomes of those who buy them have not.  They're now effectively much lower.

That's why the duration of auto loans has had to increase.  People no longer have sufficient disposable income to afford both their normal living expenses, and the monthly payments on that auto loan over a more 'conventional' term.  That's also why many US cars are now sold through short-term leases rather than auto loans - because  loan payments are simply too high.

Now it seems that, for many consumers, even the longer-duration consumer loans they took out to buy vehicles are too much for their budgets to bear.  This will have an immediate knock-on effect in the auto industry.  If its products can't be afforded by many consumers, it won't sell as many, meaning a lot of the infrastructure (and staff) built up to support a given market size will now be surplus to requirements.  That can't be a comforting feeling for those working in that field.

Miss D. and I decided long ago that we were going to get off the merry-go-round of taking out loans to "buy stuff".  We're staying as debt-free as possible, and pay for most of our needs in cash.  We're even trying to pay off our home in ten years or less.  If we need another vehicle in future, we might consider financing it, but unless the need is very urgent, we're more likely to save our money and pay cash.  I know several families who've made similar decisions.  That's even more bad news for the finance companies who issue auto loans.

Generally, the troubled loans are in the Southern portion of the US.

The expense of new cars, besides leading to leasing as an alternative, has also resulted in a HUGE increase in used-car sales. Many of those are 'fresh off-lease,' with less than 50,000 miles, usually manufacturer-certified, and selling for about half the price of a comparable new one.

In this area (SE Wisconsin), dealers are projecting 7 used for every 4 new cars sold this year; last year it was about 5 for 4.

I had several good friends go bankrupt in the late 70's and early 80's. They were cotton farmers in the panhandle of Texas. They would take out a crop loan to finance their year, then repay it after they sold their harvest. One year cotton was 28 cents a pound... about the same as it was in 1928. Weather had been rough, and the crop was of poor quality. That happened a few times, and the banks quit loaning them money. They had to stop farming.

ONE farmer I met was a peanut farmer in southern Oklahoma. He started small, I don't think he had a cab on his tractor in the early 80's! He invested what he had from the year before. Nice house, land, implements were all paid for. His example taught me a lot about financing your life with debt.

There is no guarantee of future earnings.....

When I started selling cars in 1986 the average new car cost 28 weeks of the average family income. When I left the industry in 2003, the ratio was over 50 weeks. Aside from inflation, what drove up the cost was mandated fuel economy standards and mandated safety features.

Anyone who has worked their way into a management position knows the customer is the lender, not the consumer.

It is an individual decision but the last time I had a car payment was 1984.

See, here's part of the problem nobody pays any attention to:

The glut of new cars/trucks is partially due to the EPA and the CAFE standards forcing the manufacturers to build what nobody wants to buy. That's why the vast majority of those cars got built in the first damn place, along with the unions. You go looking at those storage areas, and the majority of the cars are vehicles that simply aren't selling due to consumer disinterest.

The other problem is the financing end of it--In order to build the cars people will buy, you have to also build a spit-load of vehicles that they won't... Or, you're gonna get raped by the EPA.

As with almost all of this stuff, the problem is the government. Were the market truly left alone, you'd see the car companies doing what they should--Building what they can sell. The issue is that they went after the wrong end of the market, the manufacturer, when they should have been going after the other end, the consumer. Were they to have put in something like a net carbon tax on the vehicles we're actually driving, well... Yeah, people would have screamed bloody murder, but the market distortions wouldn't have been as bad.

You want to have the government intervene, this is the end game of that intervention. Sad, but true--And, we're going to be paying the price for it.

But the car companies are not innocent. They have loaded cars with electronic gimcrakeriee which is silly in the extreme, all in a race to capture the under-40 buyers. Except that the under-40 crowd doesn't have the MONEY, and the over-50 crowd which DOES have the money doesn't want all that crap.

I have occasionally wondered if the auto makers wouldn't be better served to take their excess vehicle stock and devote half their workforce to disassembling the cars, the parts from which would then immediately be sent to the factory to be reassembled.

They could meet their union obligations without creating unsalable vehicle stock.

@Dad29 - There is also a large population that doesn't want to be tracked / recorded by our vehicles, i.e. the FBI recording in-vehicle On-star conversations, when the owner wasn't paying for On-star, so you'd think it was "off". Also Ford's VP of marketing saying, "we know everywhere you go", and after the backlash, "but we wouldn't record that." Right...
That also doesn't get into the 'right of repair' where car (tractor) manufacturers make the vehicle unrepairable, except by the "authorized repair facility".
As was discussed previously here, I'm thankful for my older car that does what I want it to, and not what some 'designer' thinks he (or the Gov't) wants me to.

@Feather Blade - That was a part of a Science Fiction story by Robert Heinlein, where the protagonist was working in a vehicle disassembly factory, so the pieces could then be recycled to the assembly line to be reassembled into new cars. The protagonist noted that one of the cars he was disassembling couldn't drive, and was told, well, what did you expect. That car was slated to be disassembled from it's manufacture, so why would you put any effort into making sure it'd work. The whole system was to "provide jobs", and I've wondered if it wasn't a satire on our welfare system.

I bought a nice, well made imported pickup truck in 2002 and paid my loan off on time. Thanks to a manufacturer incentive program I had below 1% interest and I got a good discount off sticker. Today, 2018, I still drive that same truck, now with 325,000 miles on it and a stack of maintenance receipts in the glovebox detailing regular preventative maintenance I performed myself over those miles. Truck doesn't burn or leak oil, still gets the same MPG, and still works as well as it did when new. Sure it's got a few scratches and chips but it's mine, all mine, and the money I spend to keep it in top mechanical condition is much less than a monthly note.
Recently I had to replace some parts that I had previously bought from a major auto parts company with a lifetime warranty. The parts company gave me a lot of static about replacing the parts, claiming there was no longer a computer record of the purchase, that my receipt was illegible, and tried everyt tactic they could to deny replacing my parts.
In the end I had duplicate copies, they gave me new parts free under the lifetime warranty, and the store manager told me that people like me were not normal in today's day of disposable cars.