The background to this aircraft is interesting from many perspectives.

Back in the 1980's, during the period of rapprochement with China that preceded the Tiananmen Square massacre, US firm Grumman became involved with Pakistan and China to design an upgraded version of the latter country's Chengdu J-7, itself a licensed variant of the late-1950's-vintage Soviet Mikoyan-Gurevich MiG-21.  They came up with a concept they called the Grumman/Xian Super-7, shown in the outline drawing below. 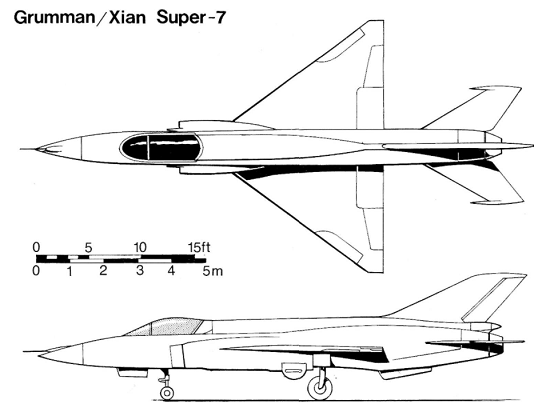 Due to various factors, particularly the disastrous effect of the Tiananmen Square massacres on Sino-US relations, the project never went beyond the design study stage.

Pakistan was in urgent need of modern fighter aircraft to replace its ageing fleet of Shenyang J-6 fighters (a Chinese version of the Soviet MiG-19).  It would also have to replace its Dassault Mirage III and Mirage V, Nanchang A-5 and Chengdu J-7 aircraft in due course.  In total, it would have to replace several hundred airframes, but could not afford to do so with the (very expensive) designs available from Western exporters.  It needed a simpler, cheaper, more affordable approach.  It turned to China to co-design and co-develop such an aircraft.  The Grumman Super-7 design reportedly served as the basis for the project.  The result was the JF-17 Thunder, which first flew in 2003 and entered service several years later.  Until recently, Pakistan was the only operator, but JF-17's have been observed in Myanmar and are being offered to other nations.  The latest, upgraded Block 3 version is claimed to be comparable or superior in capability to the US F-16C.

In many ways, the JF-17 is a modern incarnation of the 1960's Northrop F-5 Freedom Fighter and its successor, the F-5E Tiger II.  It's not dissimilar in concept to the Northrop F-20 Tigershark, which was proposed as the ultimate successor to the F-5 program, but never put into production (note - see the last paragraph of this article for what might have been!).  The JF-17's relatively low cost, about half the price of modern Western equivalents, makes it much more affordable to Third World nations, and affordable for Pakistan to buy hundreds of the plane to replace its earlier, outdated aircraft.

The USA no longer has an equivalent to the F-5 program, but one may be on the horizon.  Boeing and Saab collaborated to win the US Air Force's T-X program for a new supersonic jet trainer.

Back in the 1950's, Northrop supplied the T-38 Talon to the USAF, and it's still in service.  It was also the root of the F-5 program;  the two aircraft looked visually very similar.  I think there's no reason why the Boeing/Saab T-X might not be developed into a useful lightweight fighter, just as its predecessor was.  If so, it'll be a natural competitor for the JF-17, in price, in sales, and conceivably in combat.  Boeing predicts thousands of potential sales for the T-X design, and I'm sure not all of them will be as trainers only.

(There's an interesting historical footnote to the Northrop F-20 Tigershark program.  During the 1980's, South Africa was trying to develop its own fighter aircraft, since international sanctions prevented it from buying what it needed on the open market.  I've written about the process at some length.  There were persistent rumors, among those in a position to know, that South Africa had obtained a set of plans for the F-20.  They were allegedly studied, and considered for adaptation to use the French Atar 09K50 turbojet engine (which South Africa had a license to produce).  However, this would have been structurally difficult, and the less powerful French engine would apparently have imposed limitations on performance, particularly combat radius and weapons carrying capacity.  In the end, it was reportedly decided that those factors made the re-engined F-20 unsuitable for the country's requirements.  I don't know for a fact whether the rumors were true or not, but a couple of people with whom I had contact at the time were adamant that they'd actually seen the F-20 plans.)

The problem obviously of buying a cheap air force is that you purchase something at enormous price that is worthless in combat. I don't say that about the USAF or naval aviation because the price they paid collectively meant they had the means to roll back air defenses en masse and then control the sky with some fairly inexpensive jets. They got off on the wrong track in the 90s when they lost sight of the fact that not every fighter had to be king.

It basically boils down on the issue of whom you aim to fight with your planes. Iraq buried theres in the sand or flew them to Iran because they knew going in that they had zero chance of anything once the USAF and USN got into the mix.

We on the other hand paid a lot for air dominance aircraft. OTOH, the number of them we buy is staggering.