Day 5 on the road: to North Carolina


Following a productive visit to Dayton, Miss D. and I hit the road on Thursday morning, and turned south towards North Carolina.  After a period of heavy traffic making our way through the Cincinnati metroplex and across the Kentucky border, we settled down to a steady pace on what was probably the most enjoyable day on the road of this trip so far.  The roads through Kentucky were generally pretty good, the traffic was bearable, and the weather was enjoyable.

All went smoothly until we passed through Knoxville, TN.  Google Maps warned us of a couple of slowdowns ahead, one quite small (which we ran through without trouble), but the other much larger, which would have delayed us for a couple of hours.  Rather than endure that, we opted to go through minor mountain roads to Asheville, NC.  That was a very scenic detour, offering a glimpse of life as it must have been in pioneer days as settlers expanded from the coast into the interior of the USA.  The road was narrow and winding, and if one came across a local who was driving slowly, well, all of us who'd taken the detour just had to slow down as well, because the residents of the area weren't about to get out of the way!  The occasional farm tractor made things even more interesting.  The scenery was beautiful, particularly the French Broad River as it meandered to and fro.  The picture below (courtesy of Wikipedia) was taken in the autumn, but with all the rain recently, the river was just as full when we passed it.  The rapids were running hard, and looked pretty rough in places.  Canoeists, with kayaks perched on top of their vehicles as they searched for put-in locations, were much in evidence. After about eight hours on the road, we arrived in Brevard, NC.  It's a small town that very clearly relies for its economic well-being on tourists visiting the Pisgah National Forest and nearby attractions, with lots of restaurants, art galleries and other touristy things to enjoy.  I'm not sure who decided to name this area Transylvania County, as it bears little or no historical resemblance to its fabled namesake in Europe;  but for better or worse, someone did.  Personally, I think it deserves better! 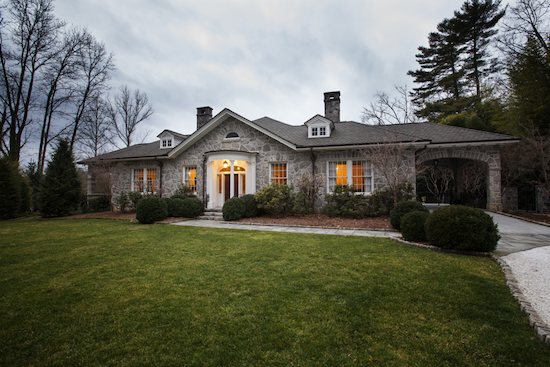 The house was built in 1926, and has been completely restored.  It's filled with antique furniture and lovely fixtures and fittings, exuding luxury and old-world charm.  My chair last night was placed approximately at the point where the picture below was taken (and very comfortable it was, too). 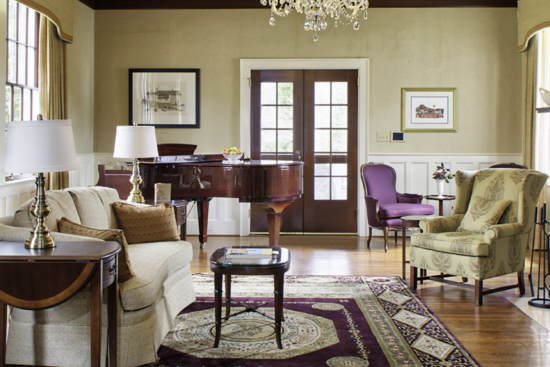 We've settled in very happily for a few days of rest and relaxation, along with frequent appeals for scritches from the local dog, who's very welcoming to everyone who dispenses them.  Our hosts offer wine and hors d'oeuvres every evening at 5.30, and serve a three-course breakfast every morning.  So far, so very good!  We're treating ourselves to the Bromfield Suite, with a mammoth four-poster bed (extremely comfortable) and an enormous attached bathroom in the old style.  One could virtually live in the latter, if one moved in a bed and cupboard - there's certainly room enough to do so!

Thursday night was a combination of tourism and necessity.  We dropped off a double load of laundry at a laundromat, and started it running in one of their big washers;  then we hurried off to a local restaurant for supper (a tasty fresh seafood pasta for Miss D., and veal marsala for me - yum!).  We made it back just in time to transfer our laundry to a dryer, then went off to look for a coffee shop that had been recommended to us.  It was closed, but a nearby art gallery wasn't, and Miss D. found a pair of handmade earrings that look very good on her.  We headed back to the laundromat, packed up our clean, dry laundry, and went back to the B&B for a well-earned night's rest.

On Friday, we'll be visiting our friends at Killer Bees Honey, whom we've met in these pages before.  They offer tours to visitors, so we're looking forward to seeing where our favorite honey comes from and how it's produced.  After that we have the weekend free, and we're going to spend it relaxing and having "couple time" together.  We don't often get the chance for that, being able to enjoy each other's presence without interruption, so we're going to make the most of it.

I'll put up more blog posts over the weekend, as I have time and inclination.

We just drove the backroads between Newport Tn and Asheville a week ago. It was beautiful.

Did you ever get a chance to try North Carolina-style BBQ? Very basic sauce (vinegar-sugar), and the heart of it is east if I-95.

How pretty! I think I'll make a note for when I explore eastern Tenn.

"Transylvania", roughly translated from latin means: "Across the forest".

There are many place names that derive from that including a certain region in eastern Europe. Another good example would be Transylvania University, in Lexington KY. It got its name because at the time of it's founding in 1780, it was indeed across the wilderness.