A failed state is a political body that has disintegrated to a point where basic conditions and responsibilities of a sovereign government no longer function properly ... A state can also fail if the government loses its legitimacy even if it is performing its functions properly. For a stable state it is necessary for the government to enjoy both effectiveness and legitimacy. Likewise, when a nation weakens and its standard of living declines, it introduces the possibility of total governmental collapse. The Fund for Peace characterizes a failed state as having the following characteristics:
Common characteristics of a failing state include a central government so weak or ineffective that it has an inability to raise taxes or other support, and has little practical control over much of its territory and hence there is a non-provision of public services. When this happens, widespread corruption and criminality, the intervention of state and non-state actors, the appearance of refugees and the involuntary movement of populations, sharp economic decline, and foreign military intervention can occur.

Larry Lambert offers this chart, provided by a federal government source, of the controlling influence of crime and the drug cartels inside Mexico.  The heading reads "Organized crime controls 60% of the country; another 20 percent, in dispute". Click the image for a larger view. 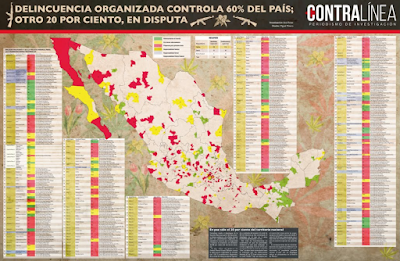 Larry, who knows the country well from years of working with the authorities there, observes:

I'm not suggesting that it's a deliberate fabrication but whoever made the map has never been on the ground in Mexico. The map does not extend cartel coverage of bribes to public officials from the very top to the bottom. It doesn't include the many billions of dollars in loans from cartels to businesses at lower than market rates and the influence that generates nationwide. Far more loans are underwritten by cartels than banks in Mexico.

In short, the analysis is impossibly optimistic.


There's more at the link.  The comments below Larry's blog post are worth reading, too, along with his responses.

The cartels are now engaged in human trafficking.  They're making money hand over fist by conveying illegal aliens from South America through Mexico to the US border.  They're quite blatant about it.  In the process, they're also exposing other "failed states" in South America, particularly Guatemala.

Although the polleros charge $3,500 to $13,000 per person to take migrants on what is often a harrowing journey on bus and foot through jungle and desert routes often used by drug gangs, the demand for their services has never been more intense, said Gilberto Escobar, a local reporter who has covered migrants.

“Coyotes live in the local communities, and they don’t need to advertise because people seek them out,” he said. “Everyone knows who they are.”

Last week, the US Department of Homeland Security announced a host of initiatives to help the Guatemalan government address migration and people-smuggling ... Both governments said they would also step up border security in Guatemala to stop the flow of migration that has overwhelmed US Customs and Border Protection agents on the US southern border with thousands of people streaming in from Central America every week.

Guatemalans generally distrust their politicians. And with good reason.

A UN-backed panel found massive corruption at every level of government in the country, including the judiciary. The country’s president, Jimmy Morales, expelled the UN investigators this year, when his family became the subject of the probe.

What this means is that Central American government promises to control illegal migration to, and into, the USA are worthless.  Even if they wanted to, they can't possibly fulfil those promises, because those governments are not in control of their own nations.  They're playing at being governments.  The real power - the power of life or death, the power to allow someone to make a living or force them to starve - comes from the proceeds of crime.  When criminals are able to enforce their will, and intimidate or even kill the police and other authorities who try to intervene, that's real power.  It's power the local populace can hear, and see, and feel, and experience every day.  If some government minister in his nice gated community in a distant capital decrees otherwise, where is his power to actually implement his decrees?  In practice, it doesn't exist.

The power of narco criminals such as the Mexican cartels, and the reason for their influence, can be summed up in one word:  money.  According to Global Financial Integrity, drug trafficking generates revenues of between $426 billion and $652 billion annually.  That's half a trillion dollars, plus-or-minus.  Contrast that with the annual gross domestic product (as reported by the International Monetary Fund) of Mexico ($1.223 trillion), Guatemala ($79 billion), or Honduras ($23 billion).  Where it matters, on the ground, the drug trafficking industry in those countries has far more disposable income than the authorities, whose budgets are eaten up by many needs, commitments and projects that have little direct effect on their populations (not to mention corruption in government that siphons off much of the national budget).  If the people need something, they go to those who can afford to pay for it.  Increasingly, that's the narcos, not the state.

Those same narco criminals are facilitating the passage through Mexico of illegal aliens from other South American nations.  Since a single illegal alien can pay as much as $5,000 to $12,000 for his journey from South America to the USA, that's a lot of revenue the cartels can skim off.  They run on money.  It's their life blood.  If they can make a couple of thousand per illegal alien passing through their territories, and they can smuggle a million of them to the US border every year, that's a revenue stream of two billion dollars per year - and it has effectively no legal consequences in Mexico.  Why wouldn't they go for it?  As a purely business decision, it's irresistible, and a very nice supplement to the money they make from the drug trade.  What's more, they've already set up the infrastructure for the latter. It can easily be applied to the human trade as well.

Therefore, I don't expect government-to-government contacts by the USA to have any appreciable effect on the number of illegal aliens entering this country.  In Central America, those are all too often failed governments in failed states.  They are no longer in control of their own countries.  Those in control are those who can pay.  Money talks;  and all the money is on the side of those sending ever more illegal aliens our way.  I think the only way to stop them is with a hard, physical barrier that keeps them out.  Nothing less will work.

I don't blame President Trump for the lack of a border wall.  That's down to the spineless Republicans in Congress and the Senate, who didn't fund it while they were in control of those bodies;  and now, it's down to the Democrats who refuse to fund a wall because they reckon illegal aliens will vote for them (legally or not) in the future.  The President does not have the "power of the purse".  Budgets are voted for in Congress, and unless they are willing to spend the money, he's left relatively impotent.  He can find bits and pieces here and there, but not enough to do the job properly.

Nevertheless, a physical barrier becomes more and more inescapable as the only practical solution to the problem.  The situation there now amounts to "a full-blown emergency".  It's pointless to look to the failed states of Central and South America to solve that problem.

* Loss of control of its territory, or of the monopoly on the legitimate use of physical force therein

We are getting there in some cities. Nothing like importing more 'duh-versity' to accelerate the process. The sacks of human waste in both parties would rather rule over ruins than a prosperous nation.

They can't.
So the trip is done on a loan-shark loan basis.
They get brought up here, and they have to turn over
50-75% of their income, sent back as remittances, otherwise the cartel takes things out on relatives of the person(s) smuggled north.

When you either cough up, or your mother, aunt, spouse, or kids get whacked, it's amazing how reliably such loans are repaid.
That's how they can afford $3-13K for the trip.

@Peter,
The narcotraficantes have run all smuggling northwards of not only drugs, but people, since 2005 or earlier.
And the cops in Mexico in the border region are all on the take for a piece of that business. (You can tell the honest ones: they're the ones with bullet holes in their foreheads.)
Everybody south of the border knows this, and nobody crosses unless they do it with a cartel coyote, because not to do so literally takes money out of the cartels' and cops' pockets.
That they both crack down on with ruthless draconian measures.
Like shooting people trying it on sight (cops), or their heads winding up in a duffel bag in vacant lot in TJ (cartels).

Everyone in the border region knows that, without reading it in the papers.

Anyone up here just figuring this out in 2019 is nearly 20 years behind reality, and their fact-gathering and reporting sucks.

Trump is doing an amazing job of playing the child that points out the emperor is wearing no clothes.

I had thought that Trump’s tweet on the cartels controlling much of Mexico was over the top, now I’m not so sure.

Trump seems to be the only adult in a house of children who think they are monkeys at a zoo, poo flinging included.

I think all the pandering and lawsuits is going to continue until the next Pancho Villa raid occurs where we actually get, on camera, American citizens getting whacked and a small town being burned to the ground. Or a border crossing.

Even then, the dithering will be of ridiculous levels, but at least it will allow our President to release the Rules of Engagement.

Brrrrrrrt....
It is coming. The only question is when.

Driving truck all over the country for the past fifteen plus years, I have watched a transformation in the warehouses where I pick up and deliver goods. I have no exact figures, but many warehouses operate almost entirely in Spanish. There are also a lot of hard looking supervisors with neck tattoos.

As Mexico is a failed state, the U.S. should establish a 50 mile no go zone starting just south of our border and kill any person in it. Perhaps give those now living there 30 days to leave.

Paul L. Quandt - 50 miles is impractical. Artillery only ranges out to about 20 miles reliably with inexpensive rounds.