Now comes the news that a brand-new electric aircraft design is set to enter commercial operation in the north-eastern US.

Israeli start-up Eviation Aircraft has announced Cape Air as the commercial launch customer for its Alice all-electric aircraft, with the “double-digit purchase option” from a long-established airline helping to validate the in-development design and put the nascent sector on the map.

Eviation has not disclosed how many aircraft the Hyannis, Massachusetts-based operator has ordered, but company co-founder and chief executive Omer Bar-Yohay says the first example will be delivered in 2022.

The Alice is making its debut at Paris with the first fully-equipped full-scale prototype on display on the static [shown below]. 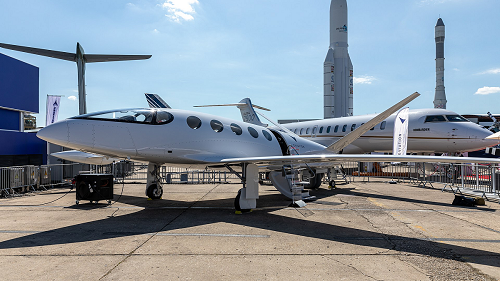 The Alice uses one main Hartzell five-blade pusher-propeller at the tail and two at the wing-tips, to reduce drag, increase redundancy and improve efficiency. Each prop is driven by a 260kW electric motor – supplied by Siemens and MagniX – powered by a 900kWh lithium-ion battery pack, giving Alice a range of 540nm on full charge and a cruise speed of 240kt (440km/h). Bar-Yohay says the battery weighs around 3,700kg (8,200lb), which accounts for around 60% of the Alice’s 5,900kg take-off weight. “[The Alice] is a huge battery with a plane painted on it,” Bar-Yohay says.

The all-composite Alice will seat up to nine passengers and two crew in its 12m (39ft)-long fuselage. The aircraft also features a bespoke fly-by-wire system and flightdeck, supplied by Honeywell.

Here's an interview with the chief executive of Eviation at the Paris Air Show this past week, in which he discusses the Alice aircraft and its design philosophy.

I note that the powerplant supplier, MagniX, is the same that's providing the powerplants for the converted Beavers in Canada.  Clearly, they're mounting a big push to dominate the market in this aircraft segment.

I'll watch this with interest.  Cape Air flies short legs with few passengers, feeding them into the larger commuter airliners and mainstream airlines.  An electrically powered aircraft is a very logical development for such transportation, while the manufacturers scale up their powerplants and batteries to fit commuter planes (so-called "puddle-jumpers").  I won't be surprised to see such aircraft powered by electricity within the next ten to fifteen years.  I don't know how long it will take before mainstream airliners will follow, but I doubt I'll be alive to see it.

In theory at least, there's no reason why something the size of a Boeing 737 can't fly using batteries, propellers, and solar cells lining the top of the cabin and wings to top up the batteries in flight.  All that's required is the technology to make the batteries and solar cells take up less space and weigh less.  Given that, almost anything's possible.

Solar cells produce a trivial amount of power relative to the needs of even smaller aircraft, so unless remote recharging for a day or 10 is acceptable they make no sense, from an engineering perspective, on aircraft. Battery power density (weight vs power) is still a small fraction of that in hydrocarbon fuel, and every pound extra in batteries is that much less in cargo.

In short, barring major breakthroughs in electricity storage this will remain a very much niche application. It has to start somewhere, though, but things like synthetic fuels (hydrogen or synthetic fossil fuels) is likely a more attainable option in our lifetime.

That area has lots of icing. Optimistic range if heat is used for deicing.

With recharging time factored, they need to remove and replace the battery packs on turnarounds if the expect optimum turn arounds.

1) it'll cut down on flights at night.
2) Lightning regularly strikes airplanes. That should be fun in an all-electric aircraft.
3) I'm thinking a 600mi range is going to be problematic for legs from the continental US to Europe or Hawaii. Just saying.
4) And this one is powered by Li-ion batteries? The same ones banned on actual airliners because they tend to burst into flames in the cargo hold?? What could possibly go wrong there???

This idea is like 3D movies.
It's a fad, and ultimately a stupid idea, but with certain very small niche possibilities. And probably at twice the cost of fossil-fueled craft.

IOW, an idea for people with more money than brains.
And passengers in the same situation.

With a propeller on each wing tip, engine out procedures better be managed by good automation. Note I said good.

'Zero emission'. Uh, no. Unless you ensure you're getting all your 'juice' from wind/hydro/solar sources, you still have emissions, it's just that they're displaced from the end user somewhat. You're putting carbon into the atmosphere through the exhaust pipes or smokestack of the powerplant generating the electricity you use, or generating radioactive waste at the nuke plant.

$200.00/hr. operating costs. That's literally unbelievable. Unless and until I see a breakdown showing what all they include and, more to the point, gloss over when determining that I'm gonna call bovine excrement. I mean, how often, and at what cost, do they have to replace the 4-1/2 ton Lithium ion battery pack?

There's a pretty good likelihood that the plane's airborne when the batteries fail.
So they won't have to replace that battery pack at all. ;)

As long as the a/c and passengers are considered disposable items with zero cost, there's no downside to this.

And ignoring island hopping and other geographically prohibited destinations, anyplace you could go within 540nm is probably someplace you could get to quicker and easier by rail, and without a ritual groping by the TSA.

Which option was wiped out as viable about 70 years ago by carbon-powered flight.

This is tech that's being pushed by math- and history-challenged Baby Ducks.

And, being batteries, take-off weight is flying weight is landing weight. Does not get lighter anywhere.

The cleanest way to fuel this thing is a Nuclear Powerplant. Even a solar plant has a much bigger ecologic foot print.

The video makes some good points that should be noted by skeptics. I was impressed with the reasoning and merits of battery-driven planes. Sounds like it would be a pleasant flight.

I'll just note as a Cape Air customer that I wasn't really the customer, Cape Air's customer was really the local town that funneled the federal "Essential Air Service" funds to Cape Air in order to keep scheduled flights happening at their little airport. Ticket price is a small proportion of what Cape Air gets for such flights, and it is the officials who grant the contract who must be pleased, not (directly) the passengers who are flown.

The town gets a huge say in what contractor gets the contract, and I'm sure for many politicians 'carbon free' air travel is enough of a USP that they'll advantage Cape Air -- at least until the competition airlines also have electric aircraft.

I'll also note FWIW that at any of the three nearby-to-me airports that were/are Cape-Air destinations, nearly 100% of the power will be hydroelectric, especially overnight

3700 kg of batteries are the equivalent of a bit less than 85 kg of AV gas.
If you include the weight of the tank, less efficiency of the motor and so on I would guess you can replace the batteries with 200 kg of fuel system.
So you can either use batteries and an "clean conscience" or use fuel to transport 3500 kg more the same distance.

There is simply no comparison.

Li-ion batteries? Tesla fires? I can't imagine what a battery fire in flight on that plane would be like. I seriously doubt it would be survivable. It's an interesting idea, but electricity storage or generation needs to be at least an order of magnitude better to make sense except in very niche markets. And two orders of magnitude better to displace hydrocarbon fuels.

The inevitable question about Electric Fan Planes is... How do you charge it? Does it have it's own on-board charger or can it only charge at certain fields, thus limiting it's destinations? What happens if said sparky-plane gets diverted from one field with charger to another without?

Which will happen in a disaster situation, natural or otherwise. Gas burners can be turned around rapidly in a disaster response situation, diverted, scrambled, etc. Lead time on flight because magic electron storing device needs to be topped off will be a serious factor.

And that lead/charge time.. Most commercial planes stay very active, doing turn, fuel and burn multiple times daily. Can these electric fans meet this capability? If not, then that will shoot the affordability of said planes down, as companies look to how quickly they can maximize profits (unless, gasp, the plane is mostly paid for by taxpayer moneys and subsidies, and flying is more virtue signalling and a side effect of being funded by tax monies and subsidies...)

This reminds me of the heyday of intra-city helicopter service. Sounds great, until an oops happens.

Larry, I can tell you exactly what it is like. The batt will melt materials until it falls out the bottom of the aircraft. You'll be dead from inhalation of toxic smoke well before the heat gets to you (how long before depends upon seat location). Emergency procedure for batt fire is simple: evacuate the aircraft. Um, not so good at altitude. I am not up to speed on the actual process of Li-Ion batts explosion so I left that fun out of the equation.

As for asymmetric thrust in the case of losing one, just shut down the other, the centerline fan will get you to the scene of the accident. Feathering better be hydraulic, not electric. For the record, the Cirrus and the Diamond are all electric except the main powerplant. It's FUBAR when you lose electrics. What could be manageable becomes an emergency.