Ebola is now a global health emergency - for the second time


The Ebola epidemic in West Africa in 2013-16 was declared a "Public Health Emergency of International Concern" by the World Health Organization, one of only five such events in history that have been officially given that title.  I don't know that the declaration did much in practical terms, apart from give warm fuzzies to the bureaucrats who issued it;  but it did underline the seriousness of the outbreak, and the potential threat it posed.  The world avoided a major international health crisis by the skin of its collective teeth in that outbreak, by shutting down as much travel as possible from the affected area unless passengers had been screened.  The screening wasn't very effective (a number got through despite it), but it at least kept the numbers to manageable proportions.

Now, for the sixth time in history, another such emergency has been declared - and, for the second time, it involves Ebola;  this time, the 2018-2019 outbreak in Congo.

The deadly Ebola outbreak in Congo is now an international health emergency, the World Health Organization announced Wednesday after a case was confirmed in a city of 2 million people ... More than 1,600 people have died since August in the second-deadliest Ebola outbreak in history, which is unfolding in a region described as a war zone.

A declaration of a global health emergency often brings greater international attention and aid, along with concerns that nervous governments might overreact with border closures.

The declaration comes days after a single case was confirmed in Goma, a major regional crossroads in northeastern Congo on the Rwandan border, with an international airport. Also, a sick Congolese fish trader traveled to Uganda and back while symptomatic — and later died of Ebola.

Dr. Joanne Liu, president of Doctors Without Borders, said she hoped the emergency designation would prompt a radical reset of Ebola response efforts.

“The reality check is that a year into the epidemic, it’s still not under control, and we are not where we should be,” she said. “We cannot keep doing the same thing and expect different results.”

Liu said vaccination strategies should be broadened and that more efforts should be made to build trust within communities.

I'm sorry that I'm not overwhelmed by medico-religious fervor at this news;  but the WHO has been dilly-dallying over this issue for far too long.  It's probably too late for this declaration to have the desired effect.  It should have been declared months ago, when a major push to screen for new cases and vaccinate those exposed to Ebola might have made a difference.  However, due to the dangers of operating in a war zone, that wasn't done.  It would have been too difficult, too dangerous.  As a result, the virus is now poised to break out into three or four new countries.  I'm taking bets that it will do so before long.  I know that area from personal experience.  Just look at this map (courtesy of the Daily Mail) of where the epidemic has spread, most recently to Goma, a city of at least one million people (according to informal estimates, double that).  Click the image for a larger view. 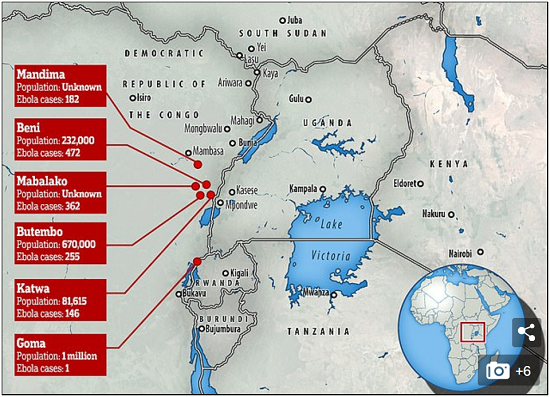 Notice how the centers of the epidemic are roughly aligned with the lakes that run from north to south along the spine of Africa.  There's a reason for that.  In the old days, commerce ran along those lakes, because water transport (by canoe, or raft, or colonial steamboat) was a lot easier than hacking one's way through equatorial forest.  Nowadays there are roads, but some are awarded that title only by courtesy.  The population is still concentrated along the old trade routes, and absent some major upheaval, it'll stay that way.  What's more, traffic is still concentrated along those routes.  That's why Ebola has spread north-south in that part of the world;  it's following the traffic.

Unless we're very lucky, look for Ebola to reach Burundi next, and from there, slowly but surely, all the way down the central African lakes and their connecting rivers to Zambia and Malawi.  Look at the blue areas on the map below.  That's how informal, local trade travels, and (like many others, such as the Black Death in Europe in the 14th century) this disease follows trade.  It will not be possible to screen all travelers using such routes.  It's physically impossible to intercept them all - and given their mistrust of graft-seeking officialdom (of which more below), they'll have every incentive to avoid checkpoints.  They'll simply take to the bush and walk around them, or sail past them. 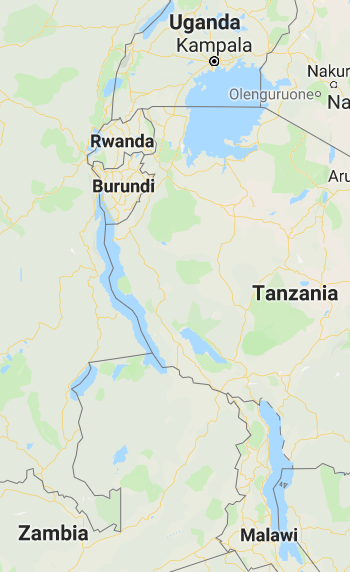 After the Rwanda massacres in 1994, hundreds of thousands of refugees fled to Goma, and still live there in camps.  Traffic across the border is almost completely uncontrolled (or was when I was last there).  People cross wherever they feel like it, to visit relatives, or shop for food, or whatever.  It's a nightmare for those trying to stop Ebola spreading any further.  That's probably going to be flatly impossible in such a location.

"Isolated cases" of Ebola have now been reported from Uganda and Kenya, with the latter subject to official denials.  (If you believe them, I have a bridge in Brooklyn, NYC, to sell you.  Cash only, please, and in small bills.)  Officials in surrounding countries are terrified of admitting to Ebola cases on their territory, because they may bring with them restrictions on travel, trade, and all sorts of things that may affect their economies - and, consequently, the graft, bribery and corruption they rely on to fill their wallets.  Can't have that interrupted, can we?  This is Africa, after all!  (That's how wealthier refugees from Ebola will evade travel restrictions, even though they may be carrying the disease.  A suitable bribe, and they'll be waved through.  How do I know this?  Because I've done it myself to evade travel restrictions, in more than one country in Africa.)  That being the case, distrust any and all official statistics coming out of the affected areas.  They may or may not be correct.  I'll trust Doctors Without Borders' figures before I trust those from any health ministry (or the World Health Organization).

I've been warning about the risks of this latest outbreak for almost a year.  Aesop, over at Raconteur Report, has been doing likewise, in rather stronger terms.  I can only draw your attention to those earlier posts, and urge you to do what you can in terms of personal preparedness.  That isn't much.  If this breaks loose over here, it's not going to be good.  (That's known in the trade as an "understatement".)

This is the solution. Lather, rinse, repeat as necessary.

Dare I ask what the others were?

Link is fine. I can RTFM, but I need to know where TFM *is*.

@Orvan: See the second link in the first paragraph of the article for more information.

As I noted in comments at my blog earlier this morning:

"This is just SS,DD.
The fact that WHO has elected to do a Headless Chicken Dance does not, therefore, mean things have changed.

It may indicate they've finally pulled their heads out of their @$$#$, but with the UN, they have no coercive power, just a bully pulpit and dubious moral high ground, so like with soap and authority, the more they use, the less they have next time.

We're off to the races when cases start showing up some place like Kinshasa, or Nairobi, or worse, on other continents, or when the numbers in DRC and contiguous countries start posting mid-hundreds to thousands of new cases per week.

Right now it's bad.
It's not yet the debacle that West Africa 2014 (and seven other countries)was. YET.
But it's looking good for getting there, eventually, albeit slowly.

Folks, comments are welcome. Racism is not.