The Old Salt Blog (an invaluable resource if you're interested in ships and the sea, and their history) reports that a 500-year-old shipwreck has been discovered, almost intact, on the floor of the Baltic.

Earlier this year, technicians operating a robotic camera surveying a route for a natural gas pipeline in the Baltic Sea, were surprised to find a 500-year-old shipwreck virtually intact on the seafloor. The ship was found at a depth of 141 meters. The lack of oxygen in the cold and brackish waters of the Baltic Sea help to slow the decay of the ship, which is sitting on the bottom with two masts still rising vertically, the beakhead and bowsprit still projecting from the prow. The remains of a yard rests diagonally on deck while nearby an unlaunched ship’s boat sits snug against the portside gunnel. A bilge pump, capstan, and an anchor, still catted to the bow, are also visible. The shape of the ship’s anchor help date the ship to the late 15th or early 16th century. 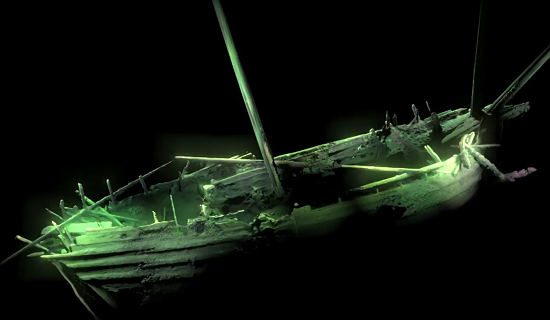 The ship, though fitted for swivel guns, is believed to be a merchantman. She is believed to have sunk near the time that Columbus made his transatlantic voyages. The Baltic ship at 50-60 feet long is roughly the same size as the ships of Columbus’ flotilla.

Here's a (silent) video showing some of what the undersea robotic exploration vehicles found.

Ships in the Baltic didn't have to face the fierce storms of the Atlantic Ocean, so their design wasn't as tall (to raise their decks above the waves) or as seaworthy.  Nevertheless, it's worth thinking about this ship's size, and looking at the picture and video above.  Columbus' flagship Santa Maria was almost exactly the same length, at 58-62 feet, depending on the source, and carried 42 on board.  His other two ships, Pinta and Nina, were slightly smaller (56 and 50 feet respectively).  In the Atlantic, the ships' crews would have sailed for weeks on end without sight of land, overcrowded, and without fresh provisions.  When storms blew up (as they inevitably did), the ships would be tossed like a cork on the waves, and if caught in particularly heavy seas, they didn't stand much of a chance.  Sailors took their lives in their hands every time they ventured out on the ocean, and many lost them.

Being able to see the actual, physical size of this vessel, and picture Columbus and his crews sailing aboard something of similar size, puts the latter's achievement in perspective.  His ships weren't much larger (and were arguably less seaworthy) than modern ocean-going yachts.  It was a hell of an accomplishment to cross the Atlantic as he did, and then to make it safely back again . . . and then to repeat the voyage three more times.  It's no wonder he, and other seafarers of the time, were regarded as heroes.  They earned their reputations the hard way.

I watched a couple YouTube videos about what life was like back then a couple months ago. It reminded me of the following video. I believe it's in Swedish, but has English subtitles. The most interesting part to me was where they replicated the idea of drinking water that was stored in wooden barrels. They let water sit inside of a barrel for 3 months and then did a taste test as well as a lab test. I won't spoil it for you, but dang. I would hate to have had to drink that water.

If you haven't read it already, Samuel Elliot Morrison's "Admiral Of The Ocean Sea" is an excellent telling of Columbus' voyages. Morrison was a yachtsman, and so his bits about dead reckoning navigation are particularly interesting.

Had some friends who got to go onto the replica Golden Hind of Sir Francis Drake fame.

Friends were short for modern people, cruising in around 5' to 5'6" and most of the compartments, especially the gun deck, were claustrophobic-inducing.

Even more modern sailing ships, like the USS Constitution, when you add in all the sailors, marines, equipment and provisions, would be far more crowded than modern sailing vessels.

And, yet, there are people who are trying very hard to eliminate the accomplishments of early sailors from the history books.

Another thing to look up is the Viking Ship that sailed from Norway to America. Using old school methods and techniques both in construction and navigation.

A similar sized vessel, the Nonsuch, which opened up Hudson's Bay has a replica in the Museum of Man and Nature in Winnipeg that you can board and walk around on.

I had the good fortune to board an exact replica (in size and detail, as far as known) of the Nina in Corpus Christi, Texas. My comment, spoken out loud and in astonishment was: "They crossed the Atlantic in this damn thing?" The guide promptly responded: "Not once, but three times,that meaning six trips." Those were really brave men, without question.