He may be right


Looking at all the frothing-at-the-mouth hysterics from progressive, far-left politicians and their supporters over the past few days, particularly over the border crisis and the July 4th celebrations in Washington D.C., I'm beginning to think that Robert Vincent may be right.

Writ large, what the self-styled "progressive left" is selling amounts to a modern version of feudalism, in which a self-appointed elite, whose status is maintained by the promotion of a self-serving "progressive," neo-Marxist dogma, is anointed to tell the rest of us peasants how we must live our lives, not unlike the Divine Right of Kings.  The Rest of Us will be compelled to create wealth for them, as they enjoy an opulent existence without earning it; the likes of Obama, Hillary, Macron, Merkel, etc., couldn't produce something genuinely useful if their lives depended on it.  In their world, over-educated uselessness becomes a virtue, as they are simply "above" having to produce anything.  It certainly beats actual work.

That is what the Left wants.  It isn't chaos.  It is integration into global feudalism.  In the end, if they are "successful," American society will be saddled with a permanent belligerent parasite immigrant class (brought about by "open borders"), a greatly reduced standard of living for most citizens, our Constitution made an irrelevant relic, Islamism unbound, and subservience to a China-dominated world.


There's more at the link.  It's worth reading in full, IMHO.

This is why those same leftist politicians can't bear to be criticized, and lash out at anyone who does.  They already see themselves as being on a pedestal, above and immune to such things.  For example, here's Representative Frederica Wilson a few days ago:

What a shrill, strident harpy she is . . . and she is, of course, completely incorrect.  It's not illegal to mock, poke fun at, and disagree with politicians.  They're all fair game, no matter what their politics (or ours).  After all, as Mark Twain put it over a century ago: 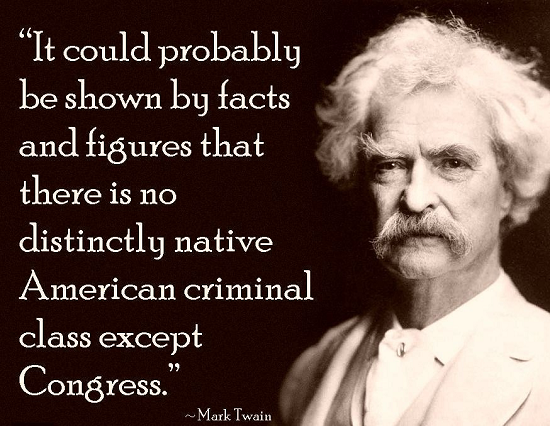 That wasn't his only criticism of Congresscritters, either.

Next week, I'm going to put up a series of videos by a perceptive observer of the US political, social and cultural scene, in which he argues that Civil War 2.0 is coming - but it won't be like the previous civil war.  It's going to be common sense Americans versus those who hew to this sort of ideologically bound, jargon-spouting, neo-communist claptrap.  I have an uncomfortable feeling he may be right, too.

It's not illegal to mock, poke fun at, and disagree with politicians -yet.

The coming unpleasantness is right vs/ left, rural vs/ urban, every race vs/ every other race. Winner take all.

I have been saying for years that the Progressive Left is simply one more self-selected elite, and that the history of the progress of civilization can be traced by the degree to which the common man can tell such pillocks to go climb a tree and make it stick.

The Progressive Elite are no worse, but certainly also no better, than the Plantation Aristocracy, the Imperial Chinese Bureaucracy, or any other concatenation of parasites. And the real point, which they will hate above all others, is that they are NOT SPECAL. They are simply the latest teraton of a condition that seems to be endemic to the human condition...sort of like mold.

If only we real Floridians could get rid of the imported rot that exists in South Florida, the state and the nation would be much improved.

And I'm not talking about the Cubans, except those that Carter let in. I'm talking about all the northern state rejects and infiltrators.

I keep hoping that the continued failures of democratic politicos down around and in Mijami would finally cause people to wake up, but, nooooo, they keep re-electing Pimp-Woman and Debbie Whatshername and our now socialist Ag Commissioner (you know, the one in charge of business licenses and Concealed Weapons Permits... Good going there, guys...)

As to the CW2, the way things are shaping up amongst the brain-dead, in a couple years no shots will have to be fired. They'll all drown standing up during a rain storm if we can block the signal from their masters to tilt their heads down...

Witness the violence in Portland, and other cities, seemingly CONDONED by the Dems in charge. C W 2 isnt coming, Peter. It's already being fought, on a one-sided, low intensity scale. Just wait til the first CCW holder has to decide between seeing his family "milkshaked" or opening fire on the Black-shirts threatening him....

The US has been degrading toward aristocracy for some time now. It's not a pleasant development - but I'm not sure it can be halted. At least as far back as Plato people noted that democracy tends to degrade into aristocracy and then finally monarchy. I think we're further along that path than most people realize - and certainly a lot farther than many people WANT to realize.