I see the new mayor of Chicago - now Heronner instead of the traditional Hizonner - is trying to blame outside factors for her city's culture of crime and death.

Chicago Mayor Lori Lightfoot weighed-in over the weekend on her city’s unprecedented gang violence; blaming nearby Indiana for the flow of guns into the region.

“Previously we had a law enforcement first and only strategy and it wasn’t working. It’s not working when you talk about neighborhoods where the unemployment rate is 25% or higher. It’s not working when you think about the fact that in many communities, 90% or more of residents are depending on public assistance and where neighborhoods haven’t been invested in, where there’s no real legitimate economic activity,” said Lightfoot.

“The fact that you can cross the border, go into Indiana and purchase military-grade weapons at any number with no background check is a terrible thing, not only for a city but look at the devastation that gun violence is wreaking every single day in our community,” she added.

In the first place, of course, that's simply not true.  Indiana is as subject to federal firearms laws as is Illinois, and in neither state is it possible to (legally) buy firearms without jumping through the required regulatory hoops - including background checks.  What's more, firearms recovered at crime scenes and during investigations are twice as likely to come from Illinois sources as from Indiana.

The real problem isn't the tools used;  it's the attitude and mentality of those using them.  A recent report illustrates the scale of the problem in Chicago's inner-city neighborhoods.

It seemed a safe place for a peace walk.

Early Monday evening, the sidewalks at Western Avenue and 68th Street gleamed from the setting sun. Cars streamed through the intersection, and neighbors poked their heads out of apartment windows over a corner store.

But the family of 15-year-old Austin Rogers was still wary. The teen had been killed a few blocks from here a month ago, and they believed the killer was somewhere in the neighborhood. This march was meant to stand up to him. “His killer’s bold. We going to have to be bold too,” explained Austin’s mother, Lola Rogers.

The march hadn’t even begun when someone spotted a familiar face on the other side of Western: the person the family suspected of shooting Austin. People began calling 911. Young children were rushed inside the store. Austin’s older brother tore from the crowd and ran halfway across the street. Rush-hour traffic screeched to a halt, angry horns blaring as relatives pleaded with the brother to come back.

Across the street, the person grinned, pulled out a pistol and pointed it at the marchers.

The family was able to hold Austin’s brother back as the person and several other males around his age ran west on 68th without firing shots. Police cars, lights flashing, circled the area minutes later, but no arrests were reported.

“My boy dead and he walking free,” Rogers said, still standing at the intersection. “They were in broad daylight, they were on Western. It’s just crazy.”

It is not uncommon in Chicago for families’ demands for justice to be met with taunts and threats and even more gun violence. At a vigil in Chatham in January 2017, seven people, including a 12-year-old boy, were shot while paying respects to a woman slain in a shooting that same week.

Clearance rates for homicides and shootings in Chicago are well below the national average. In a Tribune series last year, residents talked about having to live in the same neighborhood, even the same block, as someone they knew shot or killed someone and was never arrested.

With attitudes like that, gun control is a non-starter.  If the perpetrators can't get guns, they'll use knives, or machetes, or gasoline and matches, or baseball bats, or whatever they can get their hands on - just as their ilk do in every other country in the world.  Violence is like that.  It's not the instrument;  it's the people that are to blame.  The politicians understand that.  It's just that they won't admit it, because that would mean acknowledging that the voters who elected them are part of the problem.  It's easier for them to blame a thing, rather than a person.

If you want to get a handle on the scale of Chicago's crime problem - and the corruption, inefficiency and disastrous incompetence of the city's leadership - there's no better source than the Second City Cop blog.  Go read a few weeks' worth of its articles.  They're eye-opening.

As for comparing Chicago's problems - and those of Illinois, its parent state - to Indiana, consider this graphic. 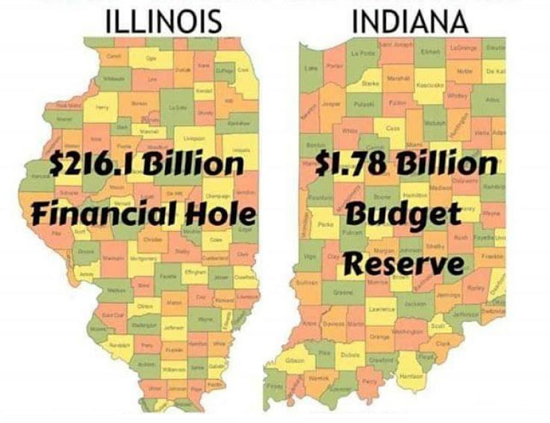 Ask yourself which party runs Illinois, and which runs Indiana.  Consider the votes that elect those parties, and where in each state they come from.  Then, wonder no more at Chicago's mayor and her wilful blindness to reality.  She was elected by the same political machine that's ruining her state.

“The fact that you can cross the border, go into Indiana and purchase military-grade weapons at any number . . .

Wonder what an A-10 goes for in Indiana? Doesn't matter, really. I've got no place to park it, can't fly it or afford fuel for even 30 minutes. Sure would make a nice lawn sculpture, though.

Lightfoot? Something suggestive about loafers comes to mind.

And you fail to mention the REAL issue:

The Demographic in the South Side of Chicago is not what it is where the crime rates are lower.....either in Illinois OR Indiana.

At the end of it, despite the fact that it all makes us uncomfortable to mention it, is race.
Black people in large numbers leads to higher rates of violence.

Sad, but true. I don't know the real root reason for that, but it is there, and it is a fact. Low unemployment/High government assistance, drugs, gangs, all are simply a symptom.

The issue comes down to race and the violence that they seem to bring when grouped in larger numbers. It seems to be a culture thing. I don't know why.

Until you solve THAT problem, you won't stop the violence.
Anywhere.

If you think about it, the atmosphere of the more violent neighborhoods is more of a war zone than a community. Some people are simply looking for a foxhole to hide in while others seek to destroy their opposition. Add to this disputes over just about anything and you get spontaneous violence.

This kind of community has existed about as long as man has walked the earth. It is the result of people living not for what they are doing or could be doing but instead it is people living in survival mode.

Until there is a change in the mentality of the people living in these neighborhoods, nothing is going to change. If not guns, machetes or knives. Club em' if you got em'.

It's not money the community lacks. It's not giveaway programs. It is family and a higher purpose than just surviving. Until these two characteristics return, the pointless violence and criminal activity will continue unabated.

You cannot fix what ails the violent portions in Chicago with government alone. Government does not know how to improve the human factor. It only deals with the results of human behavior despite all the social engineering that goes on in the halls of social services and every other agency.

Ultimately, the lure of a decent paycheck and a happier life is the only thing that can break the chain of violence and retribution. As long as the people in these areas aspire no further than the next drug deal you cannot do much to help. Banning guns is not a solution. It is a waste of time as has been proven by the ever increasing levels of violence.

“She was elected by the same political machine that's ruining her state.“

But you can hardly expect her to say so.

As for it being the concentration of blacks; there was a year in the (I believe) 1880’s when a single block in Hell’s Kitchen averaged a murder a night for an entire year. During this same period, a New York City gang (the Dead Rabbits) was notorious because THEY OWNED A GUN. I guess guns were too expensive then.

The New York gangs were mostly caucasian. Irish. And their ethnicity and religion got the blame.

Black neighborhoods are violent sinkholes because of the trap the Progressive Elite have built for the poor brown people of our society. Yes, it’s a cultural problem, but it has little to do with race. Before the policies of the Elites destroyed the Black family, their poor neighborhoods were a hell of a lot safer.

SSDD, just different 'spouter'... Nothing will be done to actually ADDRESS the issue!

Check Hey Jackass! for Chicago crime statistics including shot placement and YTD totals. I don't know if this is completely amazing or something else.

If you believe the site, the neighborhoods of Austin, Englewood, and Garfield Park are virtual DMZs. Welcome to the Second City of Moonbat Central.