. . . but I'm sure Klingon passengers would be happy!  It's a conceptual aircraft in art and model form, presented by Airbus at this week's Royal International Air Tattoo (RIAT) in England.  They've dubbed it the Airbus Bird Of Prey, although it's not armed, unlike its fictional namesake.  (In fairness, Airbus specifically links the name to birds of prey here on earth, but given the number of Trekkies out there, it's inevitable that the science fiction association will be made, too.) 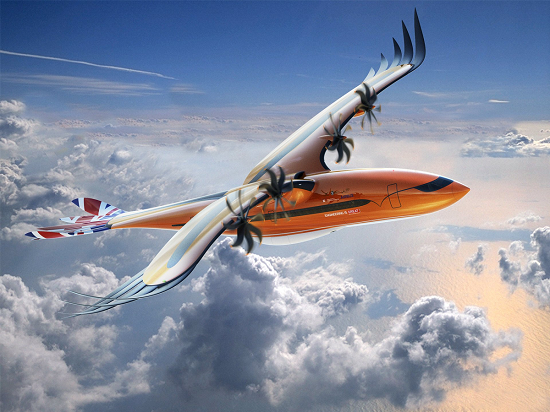 According to the company's press release:

Airbus has unveiled a bird-like conceptual airliner design with the goal of motivating the next generation of aeronautical engineers, underscoring how they can make a difference by applying technologies researched at the company in hybrid-electric propulsion, active control systems and advanced composite structures.

Revealed at this week’s Royal International Air Tattoo air show in the UK, the theoretical design is a hybrid-electric, turbo-propeller aircraft for regional air transportation. Inspired by efficient mechanics of a bird, it has wing and tail structures that mimic those of a bird of prey, while featuring individually controlled feathers that provide active flight control.

While not intended to represent an actual aircraft, Airbus’ “Bird of Prey” is based on realistic ideas – providing an insight into what a future regional aircraft could look like. It includes a blended wing-to-fuselage joint that mirrors the graceful and aerodynamic arch of an eagle or falcon, representing the potential of biomimicry (the design and production of materials, structures and systems inspired by nature).


There's more at the link, including a larger version of the image if you'd like to download it.  There's also a computer-generated-image video of the concept on Twitter.

Dare I say that if Airbus were to develop that concept into a flying model, it'd be a feather in the company's cap?  However, it might cause difficulties if it suffers a bird strike while landing or taking off.  I mean, with the aircraft looking like that, it might have been a mating attempt!

I am not an aeronautical engineer and don't play one on television, but isn't there a reason why aircraft have a vertical tail and rudder? The tail here strikes me as reminiscent of the flying wings. Didn't those have control problems until computers became available?

Does it have a cloaking device?

I'm sure the passengers will be alarmed during molting season.

One of the comments to the Twitter video was, "Could someone PLEASE take the computer away from the Industrial Designer??"

That about sums it up the best. Until there's a few thousand hours of simulation and models flying, I don't buy that it can work.

Bird of Prey would be Romulan, not Klingon.

If you fly it around the world fast enough, will you land in the 1980s?

The biggest actual (not just potential) problem is that it is an Airbus.

Their design philosophy is that the computers can always override the pilots. An example of how this is bad is Boeing's trouble with their 737 Max, which appears to be their first attempt to copy that sort of thinking. The result is deaths by the planeload, just like Airbus does.

Really stupid cost-cutting attempt by Boeing on that 737Max. Going to be a VERY expensive goof.

No, Romulans had "warbirds" Klingons had "birds of prey". Of course the first model for the bird of prey was built with the Romulans in mind, but it was instead used as a Klingon vessel.

Alternatively, it's an ornithopter.

Death to the Harkonnen!

Both Romulans and Klingons had ships called birds of prey.