Arguing from authority - by making up the authority


I've noticed a rash of spurious "quotations" from famous people in recent weeks, focusing on the debate about the Second Amendment and gun "rights", but also spreading to encompass almost every aspect of individual liberties and freedoms.  It troubles me that people aren't taking the time to verify the sources they cite so glibly;  and it troubles me even more that many of those sources are imaginary, to a greater or lesser extent.  The individuals named as sources never said what they're alleged to have said, rendering spurious any arguments based on those quotations.

Here, for example, is something Thomas Jefferson never said - but it's being spread around the Internet as true. 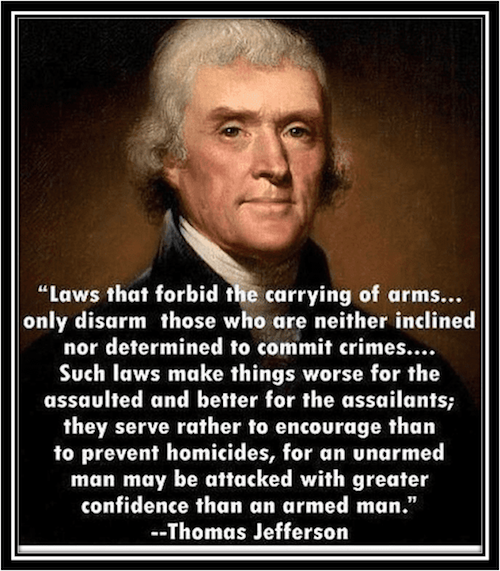 It's actually a paraphrase of a much longer excerpt from an Italian book published in 1774, which Jefferson copied (in the original Italian) into his "Commonplace Book".  The story behind it may be found here.

Jefferson is perhaps one of the most widely misquoted authorities from history (there's a very useful list here of spurious quotations attributed to him, which makes interesting reading).  However, he's far from alone.  I've seen Shakespeare misquoted more times than I can tell, not to mention the Bible (*ahem*Nancy Pelosi*ahem*) and almost every well-known politician or ruler in history.  The problem's become so bad that there are articles and books about it.

It's gotten to the point where, when someone bases their argument (or relies for support upon) a quotation from an historical figure, I automatically double-check their sources.  I'm no longer surprised (although I'm often annoyed) to find that they didn't bother to do so themselves, and therefore they've built their argument or position around a "straw man".  When called on it, they frequently try to duck and dive their way out of their self-inflicted predicament by saying that the false citation doesn't really matter;  that their argument is based on truth or fact, and they merely used the quotation to illustrate their position.  When they haven't advanced any other authoritative evidence or support for their claims, that rings hollow, to say the least.

In these troubled times, when traditional, classical and constitutional values and norms are under relentless attack everywhere, it behooves us to defend them using accurate citations, quotations and attributions.  Every time their enemies catch us misquoting something (or, God forbid, making up our supporting citations out of whole cloth, which I've seen too often for comfort), they triumphantly parade that fact as evidence to discredit our entire position.  Let's not give them that satisfaction, or that leverage;  and if we rely on some person or authority to back up our position, let's do our research first, and provide a link to the original, so our "work" can be checked.

The Left does not operate on facts, logic, or reality. To them, it simply doesn't matter whether something is true or not. Most of the time, they prefer the lies to the truth.

Logic may win men's minds, but rhetoric sways their hearts.

Even if a famous person did say something, he could have been wrong, especially if it's outside his areas of expertise (e.g., Einstein on politics, or almost any famous novelist on politics).

When I blog on some current event,unless I have first hand knowledge of the event in question, I will do research and I pride myself on being more accurate than CNN news(Well they did set the bar pretty low). Facts separate us from the liberals that run on "feelingzs" We have to be more accurate in presenting the facts, B.S. hurts our cause. the left have a built in cheer section called the mainstream media so they are shielded by them and that makes our job harder.

I see your point, but this is at best a "soft" mis-attribution since Jefferson thought it significant enough to write down in his own book.

But yeah - Mark Twain and Winston Churchill seemingly said all sorts of things that they never actually did.

"You can't trust every quote you see on the Internet." - Abraham Lincoln

"When the legend becomes fact, print the legend."

Does reality matter anymore? We seem to be living in the era of the Big Lie. Make it up, say it often and it will be accepted...

There's a "top 25 quotations of" just about anyone, from Mozart and Wagner to Shakespeare and Dickens to Elton John and Elvis Presley to Abraham Lincoln to John F. Kennedy, and so forth.

Most are quite interesting (to say the least), but no way in hell can one actually verify the veracity of the alleged sources.

Redo the meme with ~ Thomas Jefferson loved these words. Easy-peasy.

How to actually check to see if a quote is authentic?
Would it not be difficult to prove that someone who has been dead a hundred years or so, did not say something?
Not trying to be smart,but is there any simple way to check a quotation to be reasonably sure of it's accuracy (or lack of)?