The past was another country, indeed . . .


One of the most famous quotations from L. P. Hartley's novel "The Go-Between" is this:


The past is a foreign country; they do things differently there.

I've been forcibly reminded of that while reading "A Builder of the West:  The life of General William Jackson Palmer" by John S. Fisher, published in 1939. 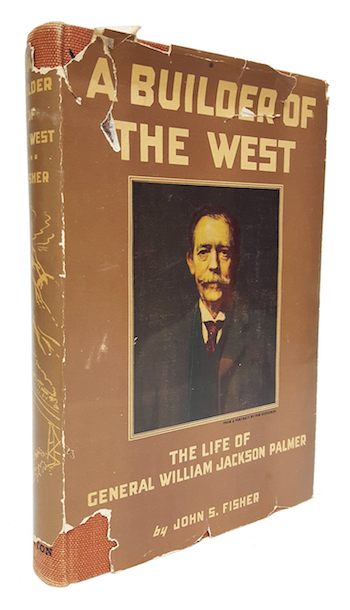 General Palmer (brief biography here) was a Civil War officer, later awarded the Medal of Honor for his battlefield courage.  He was the founder and first President of the Denver and Rio Grande Western Railroad, which has already featured in one of my Ames Archives novels, "Rocky Mountain Retribution".  He and his railroad will take center stage in at least one future Ames novel, too.

What's surprised me in reading this biography is the nonchalant attitude of General Palmer and almost everyone else in the Old West towards the casual slaughter of wildlife for no good reason except entertainment.  His letters repeatedly describe shooting from train windows at the vast herds of animals through which they passed.  For example:

"...they rode back to the railhead of the Kansas Pacific, and on by train to Sheridan, blazing away with rifle and pistol from the car windows at the great herds of buffalo.  He sits and writes to Queen Mellen (his future bride), then breaks off to fire at 'a portly and aged couple, both "bearded like the pard", who came up and defied us within fifty yards'."


And a few weeks later:

"We are out among the buffalo and antelope again, and passengers are getting out their guns to shoot at them from the car windows."


To our modern sensibilities, this is nothing short of monstrous cruelty to animals, killing purely for "sport", not even for food - the train didn't stop to collect meat from their kills.  However, in the 1860's and 1870's, it was so commonplace that it attracted little attention.  Indeed, in some circles it was regarded as praiseworthy, because every dead buffalo meant one less animal on which the Indian tribes could subsist.  By wiping out the buffalo, the destruction of the traditional Indian way of life - and their ability to prey on white settlers - was eventually assured.

I enjoy doing research like this.  Not only does it make my historical novels more accurate, it teaches me things of which I wasn't aware.  It's always good to stretch one's mind.

If you're interested in doing likewise, there are a large number of online resources where you can look for older reference works, long out of print, but containing information that simply isn't available online.  Two useful lists of available resources are here and here.  I tend to use four in particular;  Amazon.com, of course, and then (in alphabetical order) Abebooks, Alibris and Bookfinder.  When those don't find what I want, I may expand my search to other Web sites, or I may just be patient and wait - it depends how badly I want the book.  I also try to narrow down the field of what I'm looking for.  If there are, say, twenty or so books covering the area in which I'm interested, I try to shortlist the five most useful volumes, based on what other readers and researchers have said about them;  then I search for that shorter list in particular.  It cuts out a lot of deadwood.

It's also worth being patient in your search.  Some old books, such as Fisher's volume cited above, can be very expensive;  it's not unusual to find it advertised at prices well into three figures.  However, by keeping a watchful eye out, one can sometimes find a vendor (perhaps a private seller, or a thrift shop that doesn't realize what they've got) asking a much lower price, particularly if it's readable, but otherwise not in very good condition.  (Readability is what I'm after, of course, rather than collectibility.)  In this case, I waited for over two years, doing a search every month or two to monitor availability, until I found a very nice clean copy on sale for under $40.  Needless to say, I grabbed it at once!

One of the difficulties, of course, is that one's collection keeps growing.  Miss D. and I culled about two-thirds of my library before we moved to Texas in early 2016, cutting back to "only" seven large (and very full) bookcases.  I currently have enough books to fill an eighth, if I allowed myself to buy it!  In sheer self-defense, I've started buying e-book editions of many of my old favorites if they're available, and setting aside the paper editions to sell or donate.  So far, that's kept my library within manageable proportions.  Whether it'll stay that way . . . who knows?

Colorado Railroads and various mines were fertile fields for scammers and swindlers.

I get my rare books by ILL. It rarely takes more than a week for them to arrive. I read and take notes, and often scan the whole volume before returning.
That gets me what I need a low cost, and does not add to my shelving problem.

I have an alumni card at our local university. The fees are not high, and I get ILL privileges and well as access to the vast database system. Well worth the investment.

I've done this for some quite rare books, and the system has worked well.

Amazon owns Abebooks, so it's just a different website with the same inventory.

@Chas: Actually, no, it's not. Amazon may own Abebooks, but the inventory on the latter Web site is not always reflected on the former. Many booksellers list on Abebooks, but not on Amazon. Certainly, I've found listings on one but not on the other when searching for a book, so I always check both.

I sure hope not many read this entry on the blog!!! I use Abe to find older technical books just as you do for research volumes. It's a great resource. And the smell of the books isn't available in any candle or spray that I know of. The feel of older books isn't sold anywhere either.

I guess I'm a throwback, but I don't really mind. I really like to hold them as I read them. Scanning through a pdf or online is not the same...... experience.

As Glen noted above, college libraries can also be a great resource. I work for one (Texas A&M, whose library is huge), so I can check out books for up to a year, and get books on ILL, and access their online stuff, such as journal articles, as well.

One of the cool things that the TAMU library has is scanners - all you need is a USB drive, and you can scan almost any book in the library into a .pdf file. Provided you have the time and patience.

As a student in Europe, it was mentioned to me that when buying textbooks and books for research I should check Amazon.co.uk, Amazon.fr, Amazon,de, etc. as often the price was so much lower than the in-country Amazon that even with shipping it was cheaper.

In a web-search to find all the right "top-level domain" codes for the various Amazon web-stores, I came across a crawling amalgamating book-search site called "allbookstores.com"

I've found it excellent for finding the cheapest-with-shipping vendor for used copies even in the US, as it indexes AbeBooks, BetterWorldBooks, and a host of others as well as Barnes and Noble and Amazon.

It also for ISBN search will highlight the presence of other ISBN numbers with the same title and author, sometimes a newer version, older version, or version from a foreign publisher will be considerably cheaper.