Nature, red in tooth and claw


Tennyson's famous phrase was (and still is) very familiar to those growing up in Africa, and I daresay in places like Alaska and other wildernesses too.  It's the simple fact of life.  Nature is predatory and ruthless, and almost all animals die through being killed and eaten by others, sooner or later.  Those who die from other causes end up being eaten anyway!

I was reminded of that by this photograph, found at SNAFU's place.  Clickit to biggit. 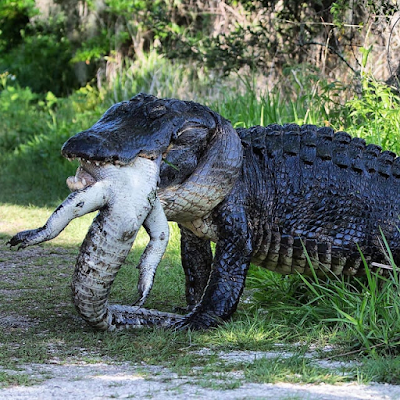 The Nile crocodile is endemic in Africa, with uncounted numbers infesting that continent's rivers and lakes.  (Some idiot's even released a few into the wild in Florida!)  They take hundreds of human victims every year, not to mention animals by the tens of thousands.  Scenes such as that shown below, during the annual wildebeest migration in Kenya, are so well-known as to have become a tourist attraction, as you can hear in the soundtrack of the video.

Yet somehow, people get upset when they see animal "cannibalism" like the photograph above.  I don't know why.  Animals are animals, without any moral sense or ethical motivation.  If they're hungry, they'll eat whatever is available.  I'd guesstimate that any full-grown crocodile or alligator must have eaten scores, if not hundreds, of smaller ones on their way to adulthood.  It's the way of the species, and the way of Nature as a whole.  The strong survive;  the weak go to the wall.  American alligators follow the same rule, it seems.

I'm rather glad civilization has sheltered many of us from that reality . . . but it doesn't shelter those having to live in the middle of it.  The figures for animal predation on humans bear that out.  We're not all that high up the food chain, when push comes to shove.

A couple of relevant stills on the same topic just yesterday
at Daily Timewaster's blog:

The Left's outlook is scientifically compounded of ambition, distraction, uglification, derision, Teh Noble Savage and Bambi.

Unfortunately it is part of the cultural mainstream.

We can watch Magogo lion videos as instructive about nature.

A close look at the first photo reveals that the smaller crocodile brought a flower for the larger one. It didn't go well.

The little one sassed the big one.

The universal law of nature, which one may remember from high school biology, is "Eat or be eaten".That applies even if the eaters are carrion flies and carrion beetles or microbes.(Thank goodness for them and the service they provide!)