Chicago politicians have consistently blamed the "flood" of guns coming in from outside for the incredibly high figures for gun crime in that city.  That's nonsense, of course, but they continue to parrot the same old excuse.  Just days ago, Mayor Lightfoot got into a Twitter spat with Senator Ted Cruz on the subject.

I think the problem is nicely summed up in this meme, that I found over at Chief Nose Wetter's place. 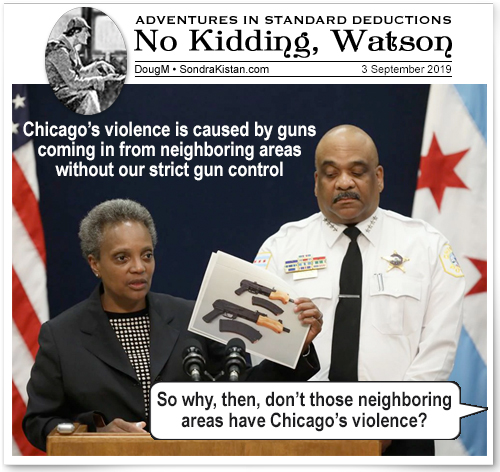 Her answer is going to be "Shut up you racist" or some variation.

There's an argument you can make that'll get you called racist even more loudly:

Houston is comparable in size to Chicago. Houston is also in TX, with gun laws that are far more permissive that Chicago, and Houston has a ton of gun stores. So, by Herroner's logic, Houston should have a crap load more gun crime, right?

Except, it doesn't. Houston has less.

And anyone who's ever looked at the FBI/DoJ crime stats knows that blacks have far higher rates of pretty much all types of violent crime than any other demographic group.

But pointing out a statistical fact is RACIST!!!!!