Hyperbole to the max - but it's a very impressive knife


I came across the Dalstrong Ravenger 9" cleaver on Amazon while searching for something else. 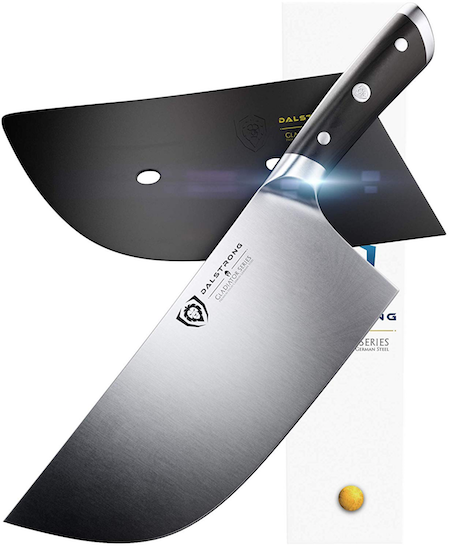 I was struck by the extraordinarily high user rating of this knife - at the time of writing, an average review of 4.8 stars by 244 respondents.  Intrigued, I read some of the reviews, and they persuaded me to take the plunge and order one.  We don't often need a big, heavy cleaver-type knife, but when we do, it's very useful;  and although this one seemed expensive, the reviewers who raved about it made me think it might be worth its price, compared to our bargain-basement part-of-a-cheap-set cleaver that's sat in our kitchen for years.

The manufacturer's description of the knife is so over-the-top it's funny.  Here's the first paragraph, to give you an idea.

The Dalstrong Gladiator Series 9” heavy duty ‘Ravager’ cleaver is a powerhouse tool of ruthless chopping efficiency. Designed for breaking down large cuts of meats and poultry, from pork bones to salmon head to endless pounds of chicken. The screamingly sharp edge also makes it highly proficient at dicing, mincing and chopping tough vegetables and fruits. The blade’s profile with a rounded end and razor-sharp tip gives it the added ability to easily remove skin and get into deep, tight places. At 1.3lbs and 4mm thick at the spine, the knife provides an excellent balance between weight and precision control. ‘The Ravager’ Gladiator Series cleaver will wreak merciless havoc upon all proteins and vegetables which stand before it’s mighty edge.


I was laughing at that . . . until I unpacked the knife.  This thing is a beast!  It's very large, yet extremely well balanced, despite its weight.  A great deal of care and attention has obviously gone into its manufacture.  Dalstrong claims (in the booklet shipped with the knife) that it takes over 35 hours from start to finish to produce it, with polishing and sharpening being done by hand.  Its looks tend to confirm those claims.  It's very well finished indeed.

Hefting it, I couldn't help thinking that it would have been a good backup weapon for Conan the Barbarian.  In fighting knife terms, this would make an excellent smatchet equivalent, perhaps even more lethal than its World War II forebear.  I don't have Conan's bulging muscles or broad shoulders (and he certainly didn't have my belly!), so I won't try a heroic pose with it.  (Besides, my wife would laugh herself silly at me.)  Nevertheless, this could well be described as a cleaver for the heroic age.  (And don't let anyone tell you a sharp cleaver-type blade can't be a very efficient weapon, if push comes to shove.  I've seen some things in Africa . . .  Those of you who've read "In the Heart of Darkness" by David Drake and Eric Flint [part of their Belisarius series, which I highly recommend] will also recall a weaponized cleaver [and weaponized meat stew, too].)

I think this thing will go through a chicken carcass, or a joint of beef, in no time at all.  I can see the average Texan barbecue cook hefting this thing, then calling loudly, "Hold my beer and bring me a steer!"  I daresay it'll reduce a large animal to its component joints in no time at all.  However, it's easy-handling enough that it's not just for large pieces of meat.  It sneered at a big, hard carrot, one that had given me trouble slicing with a regular kitchen knife.  I think it might do very well at skinning pineapples, and even cutting open coconuts for those so inclined.  The more I handle the Ravenger, the more impressed I am by the care and forethought that's clearly gone into its design.  It makes chopping or cutting big or tough, heavy or unwieldy foods so simple that it's amazing.

If the big model is a bit much for your needs, Dalstrong also make a half-size companion blade in the same "Gladiator" series of knives, the 4.5" Mini Cleaver. 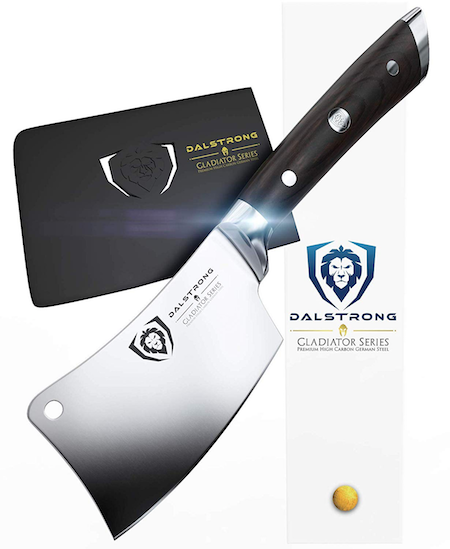 I'm impressed enough by its bigger brother that I'll probably add the smaller blade to our kitchen collection as well.  I think both will be the sort of knife one doesn't need often, but when one does, they'll make all the difference to getting the job done quickly, efficiently, and with the minimum of fuss and bother.

Color me impressed.  This knife certainly earns a 5-star review from me.

Are you afraid you cut your fingers off?

Just the ticket for Lord Vorloupulous to equip his 2000 cooks!

Don't tell the refugees in London about this thing.

Meanwhile, those proficient in English grammar will note the cringeworthy misuse of the apostrophe in "it's" in their hyperbolic description copy.

I would suggest giving both their copywriter and ad copy editor the axe, rapidly.
Hence the phrase "chop-chop".

Hrmmm... Gotta take a look at it next time I'm over your way.

I use https://www.fakespot.com/ to analyze Amazon reviews that seem overly positive. Worth a look.

I think if Jim Bowie needed a meat-cleaver, he'd want this one.

I recently purchased one of Dalstrong's bread knives (I'd misplaced my good bread knife and was very, very tired of the mangled toast produced by the other, much cheaper knife I had). While the knife was considerably more expensive than strictly necessary, it's an excellent tool.

I spent a good half hour sawing a very large chunk of jaggery into small pieces, and the knife was more than equal to the punishment. I don't need a giant butcher knife. I really don't.

The only thing missing on the hilt is some kind of finger protection, maybe a full hilt like on a trench knife.

Nice recommendation, by the way. Please update us once you have a chance to go all 'Hack-a-matic' on something.

I picked up a 10" Forschner bread knife at a garage sale some years ago; it works very well. Haven't found a need for a cleaver, though.

There could be ten ninjas in your kitchen right now.
You wouldn't want to be unprepared for that, right?

Now you need one.

I've had a Dalstrong guyto for about two years now, I last sharpened it four months ago, prior was about ten months. This evening I was slicing tomatoes, weight of the knife, no pressure from me. They hold an edge and are worth the money charged.

Peter, I don't know how you always manage to dive to the lowest possible quality knife in any class. DALSTRONG makes some reasonable stuff, but this unknown, unspecified "High Carbon German Steel" is pretty near the bottom of the barrel.

At least the Shogun series uses AUS-10 which was good 30 years ago, now just OK.

@BladeRunner1066: I don't buy a knife because I want to buy steel. I buy a knife for its utility and function. Provided its steel is adequate to that purpose, I don't worry about it. I think it's an obsession to focus more on what steel is used in a knife than on the reason one bought it. I'm sure the steel Dalstrong has used will be sufficiently serviceable for the purpose. That's good enough for me.

Check out this video of the cleaver techniques at the Skylight Inn, one of North Carolina's 3 best BBQ restaurants. They use a 2-cleaver technique to chop the BBQ pork, and the chop specialist is good enough to pull off spins with the cleavers.

I've had a set of Dalstrong Gladiator steak knives for a couple years now. I've been very happy with them.