How many of you remember this "two-faced" car?


I was amused to come across a photo essay about the Zundapp Janus, a German "bubble car" from the late 1950's. 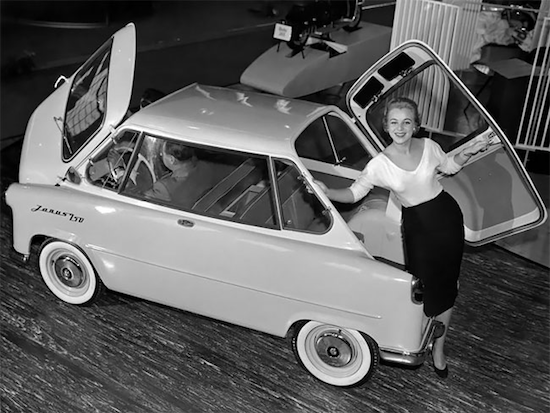 The Roman legendary god Janus, for whom it was named, had two faces, one looking ahead to the future, and one behind to the past.  The car had two doors, one in front of the driver, the other behind the rear seat.  The two seats faced forward and aft, with the engine between them.  The car was terribly underpowered, able to reach only about 50 mph (probably downhill, with a following wind), and had very little interior space if filled with its maximum of four adult passengers.  Nevertheless, several thousand were sold in its first and only year on the market before being withdrawn in 1959.

Here's one of the original German film advertisements for the car.

The two benches can be folded to form an ingenious double bed, with sleeping comfort being augmented by the detachable steering wheel. Luggage has to be accommodated via nets mounted in the doors and the options list included a heater, rear sun visors, a sunroof, duotone paint and, most importantly, a fake steering wheel for the rear-facing passengers to further traumatise any number of overtaking motorists.


A family friend in South Africa owned one, and I can remember being driven around in it.  We kids thought it was a hoot to be able to open the back door and step in and out, instead of using a side-mounted door like every other car.  I think we must have "mounted" and "dismounted" many more times than the vehicle actually moved.  Being children, the novelty was the thing.

Do any of my readers remember the Janus, or any of the other "bubble cars" of the era? I also remember driving in an Isetta, #1 in the video list below, and one of the Messerschmitt vehicles featured as well.  (The fun of riding in "a real Messerschmitt", while making appropriate machine-gun noises, never lost its appeal to a young boy - as did being a passenger in a first-generation Triumph Spitfire sports car!)

I shudder to think what health and safety experts would say about them if you tried to build bubble cars today . . . but they were fun.

My friend's dad had a bubble car. It was French, and only the front "door" opened. It looked a lot like the Janus, but the rear was pinched in and the rear wheels were close together. I don't remember what it was called.

The parents were both professors at Texas Tech. They drove SAAB Sonetts, looked like junior Corvettes. My buddie drove a SAAB 96 in high school. V4, standard, chalky red paint. It was a neat car.

I'm surprised no one has ever used one of these in a movie car chase sequence - imagine the tailer's surprise when the back door pops open and the tailee hoses him down with an SMG. Of course, with the lack of power involved it wouldn't be a high-speed car chase, which might be why we haven't seen one yet.

And since our 'betters' tried fobbing off the so-called 'Smart' Car on an unsuspecting populace, I don't think the idea is entirely dead.

One of the things we MUST do, to regain our civilization, is take up various implements of destruction and chase the 'health and safety' experts so far back into the hills they have to get Amazon to deliver daylight.

My uncle Ray bought a Messerschmitt when they moved to Atlanta back in the late 50's. I have seen pictures of it but never got to ride in it. By the time I visited in 1960 he had sold it. Looked like a fun ride.

My Dad nearly purchased one back when.It was used. Being German, it was very nicely made...a perfectly engineered vehicle for a bombed out European country. For the California freeways not so much. The old man bought a VW instead.
We did have a neighbor with a Messerschmitt...now there was a strange vehicle!

I can remember a time when my late father stated he wouldn't have a VW because it was a g_d damed kraut car. He had some issues with Germans after they tried to kill him several times in 1944-45. I can't imagine his reaction to something branded "Messerschmidt." When I bought my '85 VW GTI he had largely gotten over his hatred of all things German, and I did explain to him that it was made in Pennsylvania.

These things would make pretty good sense for in-city driving. Between towns, not so much.

Elvis owned a three wheeled Messerschmitt. You can't get more cool than that.