We had an interesting drive from North Texas to Colorado yesterday.  The massive Arctic weather front that dropped temperatures by over 60 degrees Fahrenheit in Colorado yesterday had moved well into Texas.  Miss D. and I ran into it just outside Chilicothe, where she took this amazing picture while I was driving.  It isn't wide enough to tell the whole story.  (Clickit to biggit.) 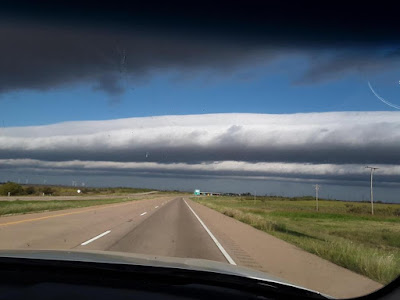 Those are four massive roll clouds in close formation, extending from one horizon to the other in an otherwise clear sky, as far as the eye could see. We were just under the first of them when she took that image.  When we left home, the temperature was a humid 79 degrees.  Within moments of hitting the cold front, demarcated by those roll clouds, the thermometer plummeted by 30 degrees.  Last night we were well below freezing . . . not a happy contrast with home!

We stopped in Amarillo, along with Old NFO and aepilotjim, to have lunch with Alma Boykin, who's always a joy to be with.  At her recommendation, we visited Thai Arawan, which served us a tasty meal.  After filling our vehicle's tank as well as our own, we headed north to Colorado.  That leg of the trip got a lot colder;  temperatures were below freezing by the time we arrived at our destination.  We had decided to wait to buy some warmer clothing until we got there, because what's sold in our home area to deal with north Texas cold doesn't do an adequate job in still colder climes.  Miss D. bought a winter hood and some gloves, while I was lucky enough to find a heavy-duty Carhartt hoodie big enough to fit over my back brace (which I wore for the journey).  It won't be adequate for serious cold, but it'll be fine for daytime temperatures down to freezing point.  For colder weather, I packed a parka.

We dropped our luggage at our hotel (which in local terms means a rather nondescript motel, without much in the way of creature comforts - there are no "name-brand" hotels at all in town), and headed for our Blogorado rendezvous at a farm half an hour outside town.  FarmDad, FarmMom and FarmDaughter were there to greet us with hugs and warm words, as were several other early arrivals.  More people trickled in as it got dark and the fires were lit in the barn.  There's a bumper crop of new farm kittens this year (at least a dozen of them), and they're unusually friendly, so most of us were kept busy scritching and stroking them, keeping them out of the fires (which they'd never encountered before), and generally enjoying their antics.  The fires, built in sort-of-kind-of chimeneas home-made by Farmdad with a welding torch out of old vehicle wheel hubs, were a great cat success.  Several kittens, after testing the hot metal curiously, settled down to sleep as close to the warmth as they could get. (No, we're not taking another kitten home with us.  One Ashbutt is enough for now!)

Last night's supper was beef pot roast with vegetables, accompanied by boiled and shredded lobster brought by one of the visitors.  It was a great start to what's normally a very filling weekend, with an over-abundance of outstanding food served over the duration.  Tonight (Friday) Miss D. and I, assisted by some of the others, will lay on a German-style meal with all the trimmings.  That's going to be fun.

15 F in Colorado Springs this AM.

High today in North Alabama expected to be 83 after several weeks of mid 90s.
Predictions are that as the front rolls through temps will drop to around 40 by dawn tomorrow.