"Don't believe everything on the Internet" is an overworked statement, but remains as true as ever.  It was proven again by a 2017 forum post, which is making the rounds in the shooting community at present (example).

This guy and his co workers were discussing whether a steel toe boot would withstand a round from a .45, so what do do you think would be the best way to test this theory? YUP, you guessed it. 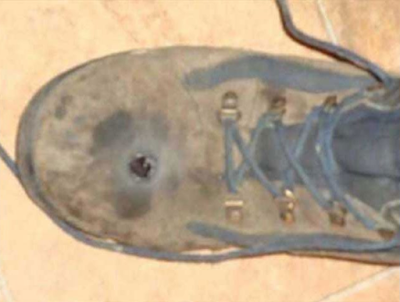 
There's more at the link, including pictures of the perforated foot.

The only thing is, it's not true.  The same pictures of the same perforated foot were circulated in 2009, showing the aftermath of an accident (or, rather, dumb stupidity) with a shotgun.  I published the story on this blog at the time, with links to the photographs.  If you look at them, you'll see they're identical to those published in the forum post and news report above.

I don't know why people feel it's a good thing to copy a picture and compose their own story to go with it, but I'm afraid it's all too common on the internet.  The old saying that "the camera doesn't lie" is now comprehensively disproven, because the people using its output are all too prone to lie!

The most disturbing thing about the images of the foot injury isn't the tissue damage there, but the fact that his feet are being rested up at (what looks like) home and not in a medical / hospital environment prior to treatment. "Yeah, let's give muh foot a quick wash before resting up and letting it all dry out (including the exposed bone) before heading into town."

Like going to J-school without having to pay an overpriced professor to explain how to assemble a fake news story.

You'd think the test could have been done without a foot inside.

1986 or so, I had the pleasure of having a certain individual under my control as a Sergeant in the Army. He saw fit to argue with his brother, off-post, about whether or not our newly-issued PASGT flak vests would stop a bullet.

This was a Sunday night. Argument was settled, there in the living room, while his wife was putting their baby to bed. An unreported and unregistered .22 caliber pistol was procured from storage, where said idiot was holding it for someone still living in the barracks, and a test was conducted. My guy stood at one end of the living room, and let his brother shoot him.

Bullet did not penetrate the vest, as all they had were .22 Short cartridges for the pistol, which were pretty close to the energy levels that the vests were designed to stop. All my genius got was one hell of a bruise, and victory in the argument.

It was then decided, in the name of fairness, that he would get to shoot his brother. Wearing the vest, thank God.

Following morning, we had a unit-level PT test, and my hero could not do situps. Sent him on sick call, and that was the end of it, or so I thought.

Come work call around 9:00am, I get called to the First Sergeant's office, where I am interrogated as to what I know about all of this--Which was nothing. Still my fault, though.

Turned out, genius's brother had gone to work in similar straits, but instead of saying he was injured working on his car over the weekend, the way my guy explained it to me, he tells his bosses that he'd been shot, by his brother...

I think you can draw the line forward, and see where this inevitably led, which was... Yeah. Let us not speak of it.

Interestingly, in later years, my guy went on to become an SF Medic. I also heard he progressed from there to becoming an Army Physician's Assistant. No corroboration, other than having heard his name when someone was telling a "...can you believe what that maniac did...?" story.


A saw pictures of a similar wound in a first aid book written about times when one is not near modern medical,facilities.
The story involved some special forces types in Africa.
One of the indigenous personnel inflicted a contact injury to the top of his foot with a twelve gauge.
The wound resembled a hole chewed by a rat down through the inststep.
The foot and wound were cleaned and the wound was packed with sugar.
The bandage was changed daily, washed, and repacked with sugar.
The pictures of the wound about six weeks later (IIRC) were phenomenal. The wound was closed and appeared to be nearly completely healed with no infection.
It was astounding.
I have used sugar-dine (a mixture of 9 parts sugar and 1 part betadine) on absessed wounds in the hooves of horses with good results.
Initially the wound does not even have to be debrided if the horse is touchy due to pain.
Keeping the wound clean dry afterward is the key to good healing.
The sugar prevents the growth of bacteria.