Saturday snippet: the opening battle of the Red River War in 1874


Today's snippet is taken from the autobiography of legendary Western scout and Indian fighter Billy Dixon, as recorded by his wife during the last year of his life, and completed by her after his death in 1913.  It's titled "Life of Billy Dixon, Plainsman, Scout and Pioneer". 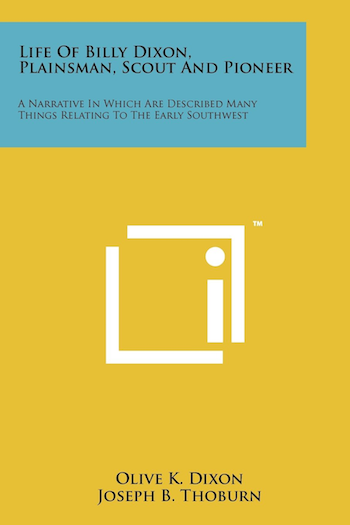 Dixon (shown below) was one of the great figures of the Indian Wars and the Old West. He was awarded the Medal of Honor for his role in the Buffalo Wallow fight of 1874, shortly after the events narrated here (one of only eight ever awarded to civilians).  Due to his status as a civilian scout, rather than a "properly" enlisted soldier, the award was later revoked, but Dixon refused to return his medal, feeling that he'd earned it fairly and the hard way.  It's hard to disagree with him!  His sentiments were vindicated when, in 1989, many years after his death, the award was posthumously reinstated. 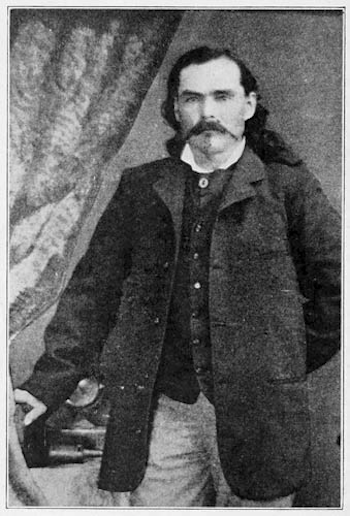 Dixon was one of those involved in the clash that started the Red River War of 1874-75, the attack by Comanche and Kiowa warriors on a buffalo hunting settlement.  It later became famous as the Second Battle of Adobe Walls.  Here's how it began, according to Dixon.

About 2 o’clock in the morning Shepherd and Mike Welch, who were sleeping in Hanrahan’s saloon, were awakened by a report that sounded like the crack of a rifle. They sprang up and discovered that the noise was caused by the cracking of the big cottonwood ridge pole.

This ridge pole sustained the weight of the dirt roof, and if the pole should break the roof would collapse and fall in, to the injury or death of those inside. Welch and Shepherd woke up a number of their companions to help them repair the roof. Some climbed on top and began throwing off the dirt, while others went down to the creek to cut a prop for the ridge pole.

This commotion woke up others, and in a little while about fifteen men were helping repair the roof. Providential things usually are mysterious; there has always been something mysterious to me in the loud report that came from that ridge pole in Hanrahan’s saloon. It seems strange that it should have happened at the very time it did, instead of at noon or some other hour, and, above all, that it should have been loud enough to wake men who were fast asleep. Twenty-eight men and one woman would have been slaughtered if the ridge pole in Hanrahan’s saloon had not cracked like a rifle shot.

By the time we had put the prop in place, the sky was growing red in the east, and Hanrahan asked me if I did not think we might as well stay up and get an early start. I agreed, and he sent Billy Ogg down to the creek to get the horses. Some of the men, however, crawled back into bed. The horses were grazing southeast of the buildings, along Adobe Walls Creek, a quarter of a mile off.

Turning to my bed, I rolled it up and threw it on the front of my wagon. As I turned to pick up my gun, which lay on the ground, I looked in the direction of our horses. They were in sight. Something else caught my eye. Just beyond the horses, at the edge of some timber, was a large body of objects advancing vaguely in the dusky dawn toward our stock and in the direction of Adobe Walls. Though keen of vision, I could not make out what the objects were, even by straining my eyes.

Then I was thunderstruck. The black body of moving objects suddenly spread out like a fan, and from it went up one single, solid yell—a warwhoop that seemed to shake the very air of the early morning. Then came the thudding roar of running horses, and the hideous cries of each of the individual warriors who engaged in the onslaught. I could see that hundreds of Indians were coming. Had it not been for the ridge pole, all of us would have been asleep.

In such desperate emergencies, men exert themselves almost automatically to do the needful thing. There is no time to make conscious effort, and if a man loses his head, he shakes hands with death.

I made a dash for my saddle horse, my first thought being to save him. I never thought for an instant that the oncoming Indians were intending an attack upon the buildings, their purpose being, as I thought, to run off our stock, which they could easily have done by cutting in ahead of them. I overlooked the number of Indians, however, or else I might have formed a different opinion.

The first mighty warwhoop had frightened my horse until he was frantic, He was running and lunging on his rope so violently that in one more run he would have pulled up the stake pin and gone to the land of stampeded horses. I managed to grab the rope, and tie my horse to my wagon.

I then rushed for my gun, and turned to get a few good shots before the Indians could turn to run away. I started to run forward a few steps. Indians running away! They were coming as straight as a bullet toward the buildings, whipping their horses at every jump.

There was never a more splendidly barbaric sight. In after years I was glad that I had seen it. Hundreds of warriors, the flower of the fighting men of the southwestern Plains tribes, mounted upon their finest horses, armed with guns and lances, and carrying heavy shields of thick buffalo hide, were coming like the wind. Over all was splashed the rich colors of red, vermilion and ochre, on the bodies of the men, on the bodies of the running horses. Scalps dangled from bridles, gorgeous war-bonnets fluttered their plumes, bright feathers dangled from the tails and manes of the horses, and the bronzed, half-naked bodies of the riders glittered with ornaments of silver and brass. Behind this head-long charging host stretched the Plains, on whose horizon the rising sun was lifting its morning fires. The warriors seemed to emerge from this glowing background.

I must confess, however, that the landscape possessed little interest for me when I saw that the Indians were coming to attack us, and that they would be at hand in a few moments. War-whooping had a very appreciable effect upon the roots of a man’s hair.

I fired one shot, but had no desire to wait and see where the bullet went. I turned and ran as quickly as possible to the nearest building, which happened to be Hanrahan’s saloon. I found it closed. I certainly felt lonesome. The alarm had spread and the boys were preparing to defend themselves. I shouted to them to let me in. An age seemed to pass before they opened the door and I sprang inside. Bullets were whistling and knocking up the dust all around me. Just as the door was opened for me, Billy Ogg ran up and fell inside, so exhausted that he could no longer stand. I am confident that if Billy had been timed, his would have been forever the world’s record. Billy had made a desperate race, and that he should escape seemed incredible.

We were scarcely inside before the Indians had surrounded all the buildings and shot out every window pane.


The hunters managed to hold out for several days.  On the third day of the fight, Dixon made a shot that's gone down in the legends of the Old West, using a .50-caliber Sharps buffalo rifle to hit a Comanche brave at an enormous range.  After the battle, when relieving forces arrived, then-Col. Miles of the US Army had the distance surveyed, and it measured out at 1,538 yards (just over nine-tenths of a mile).  That's a stupendous range for a blackpowder weapon.  Dixon, a renowned marksman, never claimed any special credit for that hit, referring to it as a "scratch" shot.  It certainly demoralized the attackers, who pulled out shortly thereafter.

Some years after his death, Billy Dixon's body was reinterred at the site of the Second Battle of Adobe Walls, where his grave may still be seen.  His Medal of Honor is preserved at the Panhandle-Plains Historical Museum in Canyon, Texas, which is well worth a day of your time to tour. 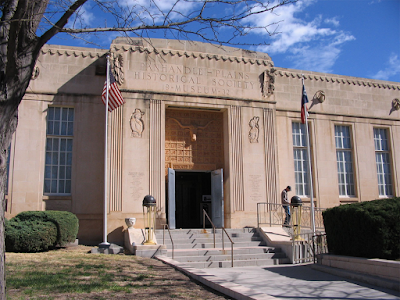 The museum has a remarkable collection of artifacts from frontier days and the early oil industry in Texas (including a very extensive firearm collection, much of which is not on display;  if you're fortunate enough to be granted admission to their basement, there are more guns there than there are in the museum above).  I've visited it several times, and expect to do so often in the future.  It's one of the better museums I've encountered, big enough to offer variety and hold your interest, but small enough to be very professionally curated and administered.  Recommended.

I never tire of reading this type of story. Thanks for posting.

That was great. How we Americans wrote in the nineteenth century was wonderful. This is redolent of that type of language. U. S. Grant's memoir, similar. I tell you, even the early telephone directories from Oskaloosa, Iowa had similar character in their text portions.

That's a great-looking museum, too. I was just in a dialogue in YouTube comments earlier in the week, with some Southeast Asian person, on the subject of modern architecture. The facade that you show is an interesting counterexample.

William "Buffalo Bill" Cody lost his Medal of Honor in the same purge that cost Billy Dixon his. He and Billy Dixon were two of five restored to scouts in 1989. Cody's is on display at the Buffalo Bill Center of the West in Cody, Wyoming.

I still want to make a trip out to Adobe Walls.

It is stated that blackpowder is notably more consistent in pressure produced than smokeless powder. This makes it ballistically more consistent at long range, greatly reducing one of the variables that affect accuracy. Seems there was a factual basis for the accurate shooting in "Quigley Down Under"!

And I can talk from experience, quality control of ammunition with piezoelectrical sensors, that smokeless powder is boringly consistent.