Yesterday Miss D. and I went to the Guardians of Freedom Air Show at Sheppard Air Force Base near Wichita Falls.  It was a lot of fun, with a surprisingly good range of aircraft for a training base, including the F-22 and F-35 fifth-generation combat aircraft.  There was a decent-size crowd, too.

While we were walking from the parking lot to the entrance to the display area, our attention was caught by a silver dart-like aircraft zooming low over the runway, quite close to us. I don't know what I looked like to my wife, but I could feel the tension right away as I recognized it. I must have showed that somehow, because she stopped in her tracks and said, "What is it?"

I replied, through partly gritted teeth, "It's a MiG."  It was - a MiG-17, to be precise, operated by Fighterjets Inc. 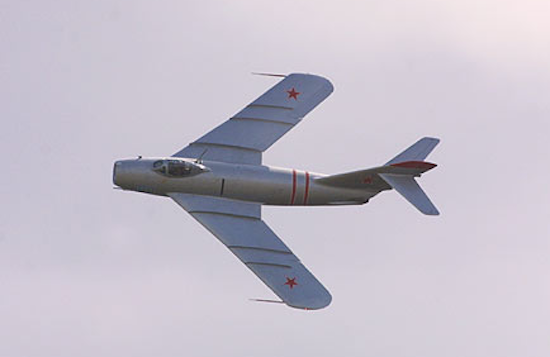 She burst out laughing.  "Why do I think you're itching to get your hands on a ground-to-air missile right now?"

I was.  In fact, the last time I saw a MiG-17, in the 1980's, it was through the sights of a former Soviet ZPU 14.5mm anti-aircraft gun, a captured weapon that we were using for local air defense in the African bush.  (I missed.)

Seeing an old enemy flying the peaceful skies near my home, with nobody shooting at it . . . for a long moment, that was a truly weird sensation!

WhatIfWeAllCared? said...
This comment has been removed by a blog administrator.
October 28, 2019 at 1:22 PM

Ah, Sheppard! Went there on Valentine's Day in '70 for Titan II missile training. Met my first love there.

Great story, to bad you missed.

Hey, my part of Texas....
To the west of Wichita Falls......ELECTRA!
plus a bunch of small hole in the wall places that did not exist on any map.
One of sisters started her short career in the air force at Shepard.

There's a guy in my hometown (Livermore, CA) who owns a MiG-15. He painted that sucker bright red.

Actually kind of neat to see it flying around.

There is a bright red mig-17 at the Lone Star Museum, Ellington Airfield, South of downtown Houston. About 5 minutes from NASA-JSC.
Take a visit once your fingers stop itching.

I saw a two-seater MiG-15 trainer for sale once in Trade a Plane. I said to myself: "Scare the hell out of your friends who have Sabrejets!"

And it'd be interesting to see what WWII air-combat vets thought of seeing, e.g., Messerschmitts or FW-190s at air shows.

I will relate a story from my early career. My Dad was Wing Commander of the CenTex wing of the Confederate AF and I spent many hours at the airport cleaning and doing whatever I could to get a ride in anything.I graduate and get a job in the semiconductor field and my boss is of German decent. I meet his dad at a cookout and conversation wandered over to I was headed to the airport tomorrow to work on the P-38 Scatterbrain Kid. His dad stood very still for a ,moment then said, "Last time I saw a P-38 was through the gun sight of my machine gun. Bastard got away. Turns out he was in training to fly the Me-262 when a flight of P-38's attacked their airfield. Couple conversations and phone calls later and he was joining us out at the airport the next day. The quiet calm as he slowly walked across the apron over toward The Kid was indeed an experience to soak in. When asked if he would care to go for a short flight, you could have heard a pin drop. That was one of the emotional experiences for everyone nearby. I shall always remember that day and the stories told that evening of beers in the restored O'Club.

Back in the 80s I had the (pleasure?) to see Migs in the wild twice. Once while working in Pakistan at the foot of the Hindu Kush. A flight came screaming down out of the mountains and roared over head at low altitude heading who knows where with bombs wobbling on the racks.

The second time was high in the High Sierra. What looked like a photo flight passed overhead. Several Migs and some sort of biz jet. Of course the US had no Migs.... Yeah right.

My Dad and I were standing in his front yard in Port Lavaca, Texas and a Confederate Air Force Japanese plane flew over. Dad looked at it, said it was a Betty, and at that distance he could have knocked down with his 20mm. He said the engine sound was off though, the Japanese planes' engines were unsynchronized, and readily recognized. I don't know what that means. He was a 17 year old on a LSM in the Naval Amphibious Corps at Gualdalcanal and served in the Corps in the Pacific the next four years.