The BBC has an intriguing report about what appears to be a very extensive propaganda campaign from Indian sources, directed against Pakistan.  It includes the apparent identity theft of a long-dead professor, whose name was used for years as if he were still alive.  It's a long, complex story that needs to be read in full to get the big picture.  Nevertheless, here are a couple of excerpts to whet your appetite.

A dead professor and numerous defunct organisations were resurrected and used alongside at least 750 fake media outlets [some shown below] in a vast 15-year global disinformation campaign to serve Indian interests, a new investigation has revealed. 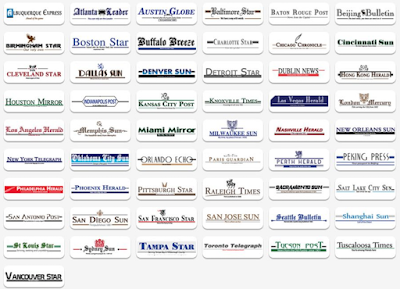 The man whose identity was stolen was regarded as one of the founding fathers of international human rights law, who died aged 92 in 2006.

"It is the largest network we have exposed," said Alexandre Alaphilippe, executive director of EU DisinfoLab, which undertook the investigation and published an extensive report on Wednesday.

There is no evidence the network is linked to India's government, but it relies heavily on amplifying content produced on fake media outlets with the help of Asian News International (ANI) - India's largest wire service and a key focus of the investigation.

One particular NGO which caught the eye of the researchers was the Commission to Study the Organisation of Peace (CSOP). The CSOP was founded in the 1930s and won UN-accreditation in 1975 but became inactive later in the 1970s.

The investigation found that a former chairman of the CSOP - Prof Louis B Sohn, one of the 20th Century's leading international law scholars and a Harvard Law faculty member for 39 years - was listed under the name Louis Shon as a CSOP participant at the UNHRC session in 2007 and at a separate event in Washington DC in 2011.

The listings shocked the researchers because Prof Sohn died in 2006.

The authors dedicated their investigation to the professor's memory, writing that his name had been "usurped by the malicious actors in this report". They said CSOP "had been resurrected, and its identity hijacked in 2005 by the same actors depicted in our first investigation".

There's much more at the link.  It makes fascinating reading.

The report describes a real-world undercover network that's operated for decades, and probably been very successful (although we'll never know for sure how far its tentacles extended).  Bear in mind that this is just one such organization, run from a country not often publicly associated with such activities.  If India can do this, how many other countries are doing the same?  How many major powers are also involved?  There are probably hundreds, if not thousands of such networks, all seeking to influence public opinion and affect national and international policies.

I was particularly struck by the setting up of over 700 false news media outlets, which existed only in their inventors' imagination, but which put out "articles" or "press releases" that were then cited and quoted in other, legitimate news media worldwide.  Clearly, journalists don't always check their sources.  If they're spoon-fed an attractive quote or snippet of information, they'll use it without asking any questions about whether it, or its source, is legitimate.

"Fake news" indeed - and fake media, too.  I wonder how many US journalists and editors were taken in by this scheme over the years?

"Fake news" indeed - and fake media, too. I wonder how many US journalists and editors were taken in by this scheme over the years?

Wellllllllllllllllllll, given the NYT and WaPoo alone, they're doing the same thing. Which is why I say that I despise, detest, and TOTALLY distrust the media. It/they LIE to us.

The question I'm hung up on, is "Why?"
.
Anyone who paid any attention already knew that Pakistan was a bad actor, a threat to regional stability, and indifferent (at best) to human rights before this.

Even the most blatant propaganda would find it hard to equate Pakistan with Iran or China, and countries and companies are still lining up to do business with *them*.

So what's the benefit?
Why all the time, effort, and money into a sinkhole that doesn't seem to actually DO anything?

Interesting. Fake news, sure, but aimed at whom? The Indian people themselves?

It's no worse than the disinformation campaign run by the Palestinians and those who control the Palestinians since 1948. Just look at how many actually believe those reports, even after Israel's debunked them.

People want to see what they want to see. Fake news fills that roll very well.