Election fraud in Georgia - will 2021 be the same old, same old? 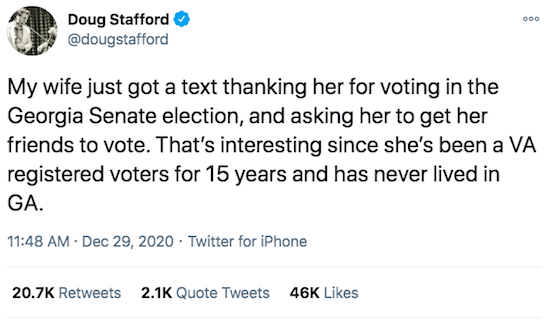 This, in a state where a judge (the sister of one of its leading progressive Democratic Party politicians) has just blocked the removal of invalid voters' names in two counties.  She was asked to recuse herself from the case due to that relationship, but stated that "she found no reason for doing so".  If she'd been the relative of a Republican politician, do you think her refusal would have met with the same quasi-conspiratorial, silent assent from the mainstream media?

This all comes after some truly weird statistical anomalies in Georgia during the November 2020 elections.

In Georgia, Biden overtook Trump with 89 percent of the votes counted. For the next 53 batches of votes counted, Biden led Trump by the same exact 50.05 to 49.95 percent margin in every single batch. It is particularly perplexing that all statistical anomalies and tabulation abnormalities were in Biden’s favor. Whether the cause was simple human error or nefarious activity, or a combination, clearly something peculiar happened.

I wouldn't call it "something peculiar".  I'd call it criminal electoral fraud!  What other explanation can there possibly be for such a statistical improbability???

There's also the issue of missing chain-of-custody documentation for almost half a million absentee ballots in Georgia - documents that are legally required by the state.  Without them, the validity of those ballots is in question;  yet, despite its own laws and regulations, the state appears willing to accept them without any investigation, despite their flawed and potentially fraudulent handling.

After the shenanigans there during last month's election, I've got Georgia on my mind, all right . . . as a synonym for electoral fraud!  Are you willing to bet that the January runoff elections there for two US Senate seats will be conducted freely, fairly and honestly?  I can't say I am.

This leaves us in a parlous position indeed, with very few (if any) alternatives, as I pointed out on Monday.

I've been getting text messages from GA campaigns from the left. It's anything from simply voting to requesting a mail in ballot. My number is in Texas though, so you wonder how they put together these databases. I always let them know that Warnock is a communist sack of human waste along with his fellow candidates.

The fix is in. Until justice is served we will have this. I hope Pence does the right thing on 6 January 2021.

Ask yourself why should they stop? There are no consequences; nobody has been arrested, let alone sentenced. I have to assume people are getting paid to fix the election, so committing fraud is all positive with no negative.

We have this judge, her sister Stacy Abrams, and who knows how many others in power pulling the strings to protect them. Nothing will happen.

It's a naked takeover of government done without firing a shot.

Unfortunately, SiGraybeard is correct. Only when the nation starts enforcing election-fraud laws and starts treating the acts of election as sedition and open resistance to a lawfully elected government will any of this slow down.

Only if you really start decorating lamp-posts and public squares with the dead bodies of these seditious bastards and female dogs will it stop.

Once again, the Left rears its ugly head. They're screaming for vaccination identification but go full balky at voter id that matches REAL ID standards.

Shoot them. Hang them. Use their bodies as pinatas. It's the only way to stop this bull-scat. They got away with it in their trial run during 2018. Now? I don't trust any election process. Any. Do you?

The fix may be in. If so, the damn fools want war, and may get it.