Saturday Snippet: A city under fire

Martha Gellhorn was an American novelist, travel writer and journalist who developed a stellar reputation as a war correspondent.  She covered the Spanish Civil War in the 1930's, World War II, the Korean War and the Vietnam War, among others.  As a woman in what was originally regarded as a man's field, she attracted what one might call "novelty interest";  but her reporting was outstanding in its own right, and she developed her own reputation as a top journalist.

Her book "The Face of War" collects many of her reports from various conflicts over more than 50 years. 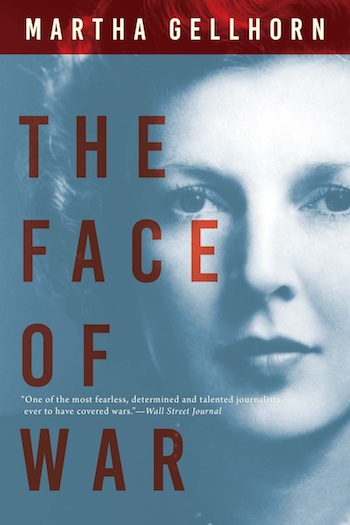 Here's an excerpt from her report in July 1937 about Madrid, the capital city of Republican Spain.  It was under shellfire from Nationalist forces who would eventually capture it (and win the Spanish Civil War).  Having been under fire in other cities, on a different continent, I can testify from personal experience that she accurately captures the dissonant nature of life under bombardment.  People adjust and carry on in ways that seem strange and disconnected from reality:  but life must go on, because if it doesn't, you die anyway - just more slowly.

It seemed a little crazy to be living in a hotel, like a hotel in Des Moines or New Orleans, with a lobby and wicker chairs in the lounge, and signs on the door of your room telling you that they would press your clothes immediately and that meals served privately cost ten percent more, and meantime it was like a trench when they lay down an artillery barrage. The whole place trembled to the explosion of the shells.

The concierge was in the lobby and he said, apologetically, “I regret this, Mademoiselle. It is not pleasant. I can guarantee you that the bombing in November was worse. However, it is regrettable.”

I said yes, indeed, it was not very nice, was it? He said that perhaps I had better take a room in the back of the house, which might be safer. On the other hand, the rooms were not so agreeable; there was less air. I said of course there wouldn't be so much air. Then we stood in the lobby and listened.

You could only wait. All over Madrid, for fifteen days now, people had been waiting. You waited for the shelling to start, and for it to end, and for it to start again. It came from three directions, at any time, without warning and without purpose. Looking out the door, I saw people standing in doorways all around the square, just standing there patiently, and then suddenly a shell landed, and there was a fountain of granite cobblestones flying up into the air, and the silver lyddite smoke floated off softly.

A little Spaniard with a lavender shirt, a ready-made bow tie and bright brown eyes was standing in the door watching this with interest. There was also no reason for the shells to stay out of the hotel. They could land inside that door as well as anywhere else. Another shell hit, halfway across the street, and a window broke gently and airily, making a lovely tinkling musical sound.

I was watching the people in the other doorways, as best I could, watching those immensely quiet, stretched faces. You had a feeling you had been waiting here forever, and yesterday you felt the same way. The little Spaniard said to me, “You don't like it?”

“Yes,” I said, but without enthusiasm.

We stood there a moment, and there was silence. Before this the shells had been falling one a minute.

“Well,” he said, “I think that is all. I have work to do. I am a serious man. I cannot spend my time waiting for shells. Salud,” he said, and walked out calmly into the street, and calmly crossed it.

Seeing him, some other men decided the shelling was finished too, and presently people were crossing that square, which now was pock-marked with great round holes, and littered with broken cobblestones and glass. An old woman with a market basket on her arm hurried down a side street. And two boys came around the corner, arm in arm, singing.

I went back to my room, and again suddenly there came that whistle-whine-scream-roar and the noise was in your throat and you couldn't feel or hear or think and the building shook and seemed to settle. Outside in the hall, the maids were calling to one another, like birds, in high excited voices. The concierge ran upstairs looking concerned and shaking his head. On the floor above, we went into a room in which the lyddite smoke still hung mistily. There was nothing left in that room, the furniture was kindling wood, the walls were stripped and in places torn open, a great hole led into the next room and the bed was twisted iron and stood upright and silly against the wall.

“Oh, my,” the concierge said miserably.

“Oh,” one of the youngest maids said, “imagine, it has also spoiled the bathroom in 218.”

The journalist who lived in that room had left for London the day before.

“Well,” the concierge said, “there is nothing to do. It is very regrettable.”

The maids went back to work. An aviator came down from the fifth floor. He said it was disgusting; he had two days leave and this sort of thing went on. Moreover, he said, a shell fragment had hit his room and broken all his toilet articles. It was inconsiderate; it wasn't right. He would now go out and have a beer. He waited at the door for a shell to land, and ran across the square, reaching the café across the street just before the next shell. You couldn't wait forever; you couldn't be careful all day.

Later, you could see people around Madrid examining the new shell holes with curiosity and wonder. Otherwise they went on with the routine of their lives, as if they had been interrupted by a heavy rainstorm but nothing more. In a café which was hit in the morning, where three men were killed sitting at a table reading their morning papers and drinking coffee, the clients came back in the afternoon. You went to Chicote's bar at the end of the day, walking up the street which was No Man's Land, where you could hear the shells whistling even when there was silence, and the bar was crowded as always. On the way you had passed a dead horse and a very dead mule, chopped with shell fragments, and you had passed crisscrossing trails of human blood on the pavement.

You would be walking down a street, hearing only the city noises of streetcars and automobiles and people calling to one another, and suddenly, crushing it all out, would be the huge stony deep booming of a falling shell, at the corner. There was no place to run, because how did you know that the next shell would not be behind you, or ahead, or to the left: or right? And going indoors was fairly silly too, considering what shells can do to a house.

So perhaps you went into a store because that was what you had intended doing before all this started. Inside a shoe shop, five women are trying on shoes. Two girls are buying summery sandals, sitting by the front window of the shop. After the third explosion, the salesman says politely: “I think we had better move farther back into the shop. The window might break and cut you.”

Women are standing in line, as they do all over Madrid, quiet women, dressed usually in black, with market baskets on their arms, waiting to buy food. A shell falls across the square. They turn their heads to look, and move a little closer to the house, but no one leaves her place in line.

After all, they have been waiting there for three hours and the children expect food at home.

In the Plaza Major, the shoeblacks stand around the edges of the square, with their little boxes of creams and brushes, and passers-by stop and have their shoes polished as they read a paper or gossip together. When the shells fall too heavily, the shoeblacks pick up their boxes and retreat a little way into a side street.

So now the square is empty, though people are leaning close against the houses around it, and the shells are falling so fast that there is almost no time between them to hear them coming, only the steady roaring as they land on the granite cobblestones.

Then for a moment it stops. An old woman, with a shawl over her shoulders, holding a terrified thin little boy by the hand, runs out into the square. You know what she is thinking: she is thinking she must get the child home, you are always safer in your own place, with the things you know. Somehow you do not believe you can get killed when you are sitting in your own parlor, you never think that. She is in the middle of the square when the next one comes.

A small piece of twisted steel, hot and very sharp, sprays off from the shell; it takes the little boy in the throat. The old woman stands there, holding the hand of the dead child, looking at him stupidly, not saying anything, and men run out toward her to carry the child. At their left, at the side of the square, is a huge brilliant sign which says: GET OUT OF MADRID.

It's a nightmarishly dystopian scene to those who've never experienced anything like it.  On the other hand, ask anyone who's had to endure a city siege.  (Selco's description of life in Sarajevo during the Balkan wars of the 1990's comes to mind.)  They'll tell you it's a pretty accurate description of the fatalism that overcomes you when you're trapped in a situation of deadly danger from which there's no escape, and which you can't control.

I hope and pray we never experience the like in these United States.  Sadly, that's probably a pipe dream.  Ask the innocent residents of Minneapolis, Seattle, Portland and so many other cities, after the events of 2020 . . .  Those were, I fear, just a precursor to what may be coming in the years ahead.

I tend to be a hardcore procrastinator, but I felt the urge to obtain a LTC and buy a gun a few months ago. Dark days.

It is truly life changing in many ways. You become innured to the violence and death, treating it as just another day.

I think when it gets real there will be a realignment. The mort will move out not from the city but from the surrounding suburbs. I'm not one to hobnob with the police but I did overhear one conversation where the cop hit the radio to say that there was a lot of shooting to the south. HQ said ignore it. I'm sure they'll do that here too. OTGH, we have a plan.