The passing of Brigadier-General Chuck Yeager a few days ago has been met with an outpouring of recognition, remembrance and praise such as few people receive.  He appears to have been one of nature's genuinely "nice people", approachable, gentlemanly and filled with the joy of life.  I never had the privilege of knowing him, but after reading his autobiography and its sequel, it felt as if I did.  He had a raconteur's gift.  Decades after their first publication, his books remain popular.

Fellow blogger Murphy's Law has a personal reminiscence of General Yeager that encapsulates the kind of man he was.  You can read the whole thing at his blog.  Highly recommended.

My closest encounter with General Yeager wasn't with the man himself, but with an aircraft that he loved.  Back in the mid-1970's, Northrop developed the F-20 Tigershark, the culmination of its successful F-5A/B Freedom Fighter and F-5E/F Tiger II light fighter programs. 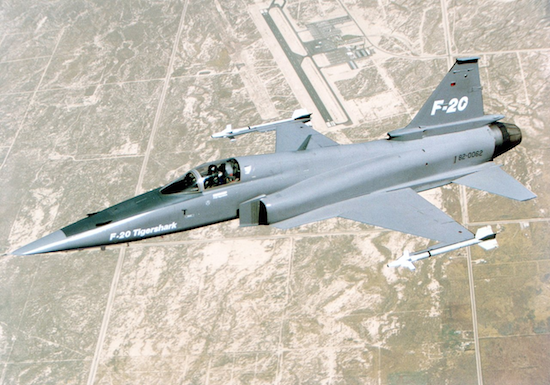 Intended as a simpler, cheaper competitor to the F-16 Fighting Falcon, the F-20 was aimed at overseas markets that didn't require the sophistication of the former aircraft, or that couldn't afford it.  Sadly, it was doomed by a US government decision to subsidize the sales of F-16's, which made the F-20 uneconomical by comparison.  Three prototypes were built, but the aircraft never entered serial manufacture.  General Yeager flew the F-20 frequently, and loved the aircraft, regarding it as a true pilot's airplane.  He invested in the project, and lost his money when it failed.

Be that as it may, by some unknown means a set of blueprints for the F-20 ended up in South Africa during the mid-1980's.  At the time, the country was trying to design its own supersonic fighter (about which I wrote some years ago).  In the process, a large amount of foreign design material was "acquired", by fair means or foul, and studied.

As it was later explained to me, there was a school of thought that proposed South Africa should build its own version of the Tigershark, as the latter's electronics were less complex than many of its competitors, and therefore better suited to replacement by South African components.  However, its outstanding performance depended on its turbofan engine, producing greater thrust than anything available to South Africa at the time;  and this was improved even further by the use of lightweight materials that were not available to that country either.  To re-engine the F-20 with an older-technology, lower-thrust, higher-weight turbojet (in a heavier fuselage) would have been very complicated from an engineering perspective, and would have reduced its performance to a level not much better than South Africa's 1970's-vintage Mirage F1 fighters.  Therefore, the project was shelved in favor of what became the Carver program.

Thus, as I said, I never met General Yeager, but I did have distant contact with an aircraft he flew and loved.  I guess that'll have to do!

In this video, the late General discusses air combat from World War II through the Vietnam War.  Aviation enthusiasts will enjoy it.

There was so much in the life of this warrior, patriot, and brave aviation innovator that exemplifies the best that America has produced. The Greatest Generation produced none greater than Gen. Chuck Yeager of West By-God Virginia, America, and the skies of the world. May he rest in peace with our eternal gratitude.

I love the way cartoonist Bill Bramhall of the New York Daily News saw the news of Chuck Yeager's death.  Click that link for a larger view at the newspaper's Web site. 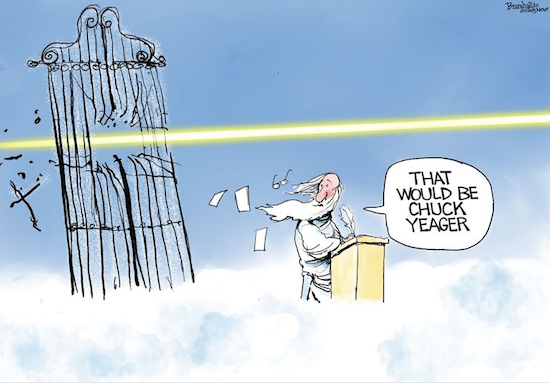 Godspeed, General Yeager, sir, and watch out for angels up there.  I suspect they have the right of way!

I got to meet General Yeager at the SCI convention in Reno, NV in the 1990’s. He was an avid hunter and wandered around the convention. He was polite but reserved. Someone who was friends with the general said he was wary of having his name used in things he did not approve of. After the film version of The Right Stuff came out, he had been besieged with all sorts of offers.

Duke Cunningham told a story about meeting General Yeager at some fighter pilots reunion. He said Yeager had both hands out, re-enacting a dog fight. The hands went up and down, rolled and pitched, the left hand doggedly following the right hand one all over the imaginary sky.

Cunningham, an ace in Vietnam, asked General Yeager,” So Chuck, How did you shoot him down?”

A note on the F-20. It was not just an upgraded F-5. The F-20 could out maneuver the F-16, from a cold start (run to the plane, start the engine and such) initialize gyros and avionics, taxi, takeoff and be on the way before the F-16 was ready to taxi.

Unfortunately, the F-20 did not have backers in Congress for a US military purchase or big backers for FMS. The F-16 backers pushed force multiplying and multi-mission all of which the F-20 could perform in the same manner. Great airplane gone the way of we don't like Jack Northrup.

I have the book from my little brother, who got his pilot's license at age fourteen years old, before he was old enough for a driver's license(15 years old).

Here is a link to an image of the cover:
https://photos.app.goo.gl/DbcoSSjuL1ypMWrJ6

I have spent most of my career in aerospace working on 5th generation fighter programs and even I think the F-20 would have been great. Simple has a quality all it's own and tends to generate higher mission capability rates.

Yeager was probably describing a dogfight against an Me-109 near the end of his time in the ETO. His assumption was that he had run into an "experten", which was the term the Luftwaffe pilots used to label a fighter pilot that was seriously competent in fighting, and generally had ~50 kills at a minimum.

During the last year of the war, when the P-51 was our main air superiority fighter, German fighters mostly had very inexperienced pilots, leavened with those pilots that had been flying for years, maybe even since the start. There were several that had 250-301 kills, and the highest had 352, his last victim shot down on the last day of the war!

German and Japanese experience indicated that it could take many months, up to a year, of air combat before a pilot became accomplished at fighting. And this with pilots that had prewar flight training, equal or exceeding what the Allies mandated for training hours, along with VERY stringent selection paramenters.

American and British rules generally had combat pilots rotated home after a set number of combat missions, and this was less than a year. American pilots almost never were allowed to return to combat for a second try, especially if they had run up a notable score. Our highest scorer only had 40 kills.

Yeager had 11.5 kills, which puts him in a rare category, as most of our combat pilots had less than 5, which was the minimum to be rated as "Ace". About 10% of combat pilots had 90% of the kills, for most all countries. Basically, there were hunters, and targets.

F-20 was an amazing plane, I still have a t-shirt that fits.

Amazing how politics and General Dynamics killed it.