How COVID-19 is being used to manipulate us, and our society 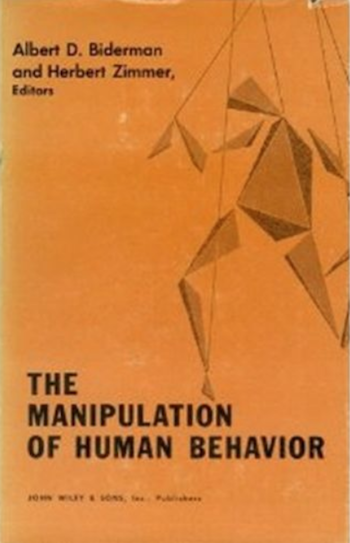 It examined Communist attempts to brainwash and manipulate US prisoners of war in Korea.  It's become a seminal work in its field, still used and regarded as authoritative to this day.

Numerous Web sites have drawn attention to parallels between what the book describes as manipulation techniques, and measures taken to limit the spread of the COVID-19 virus.  One has to admit, the parallels are ominous.  Here's an example of the infographic that's been widely circulated. 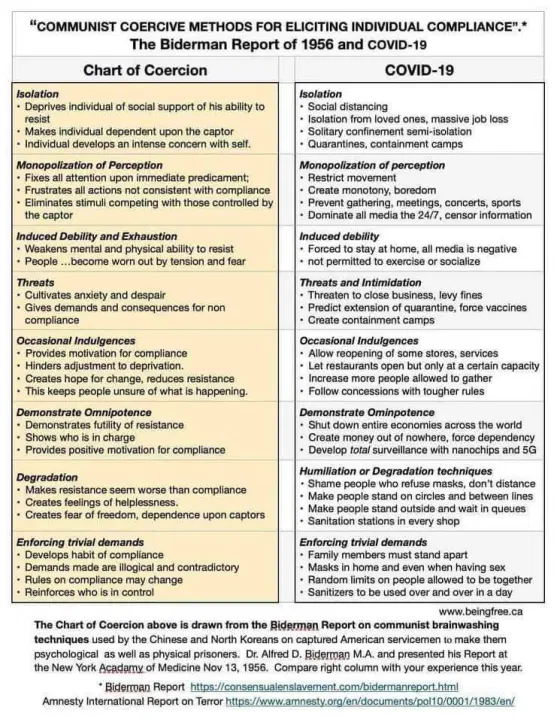 That's the problem with measures imposed on society for even a good reason (and, let's admit, restricting the spread of disease is - at least nominally - a good reason).  All too often, the measures are not fully explained, or even rationally analyzed from a scientific perspective.  They're thrown out there in a desperate attempt to do something - anything! - to improve the situation.  If they don't work, the bureaucrats involved try to threaten people into compliance, or manipulate them into cooperating rather than questioning.

That's how freedom vanishes.  By all means, let scientifically valid measures be taken, and let compliance be not just requested, but regulated:  but make sure that the measures are, indeed, valid, not just bureaucratic knee-jerks.  In the case of far too many measures against COVID-19, the cure has proved worse than the disease.  If we beat the pandemic, but destroy our economy in the process, what have we really achieved?

As the late President Ronald Reagan reminded us:

That applies to bureaucrats, politicians and their regulations, too!  Let's not allow them to blind us to reason, or stop us from thinking for ourselves.  That doesn't mean we should willfully disregard their recommendations - it just means we should judge them according to their accuracy, their effectiveness and their validity.

Dictatorial politicians like Gretchen Whitmer and Gavin Newsom and their ilk, and their autocratic pronouncements from what they seem to think is the throne of their office, don't deserve the time of day.

Disturbing theory Peter with a lot of evidence to support it.

My theory has been the politicians want to be seen as doing something, and when their previous actions don’t work, they add on new restrictions.

And their campaign backers are not hurt much by the restrictions, since our elite can telework.

Truthfully, I just can’t explain logically the reasoning behind the latest restrictions in California.

Yes, we are being trained to obedience while being financially and emotionally devastated by unconstitutional and unnecessary orders for house arest under the guise that this is going to kill off 10 or 20 percent of the population rather than this being a duplicate of a severe flu season. Trump should issue an EO stating no businesses can be declared 'non-essential' without legislative approval. Then do another banning mandatory masks. Let the left live up to the 'rules' rather than impose Alinsky's on Trump while he follows the constitution (as they shred it).