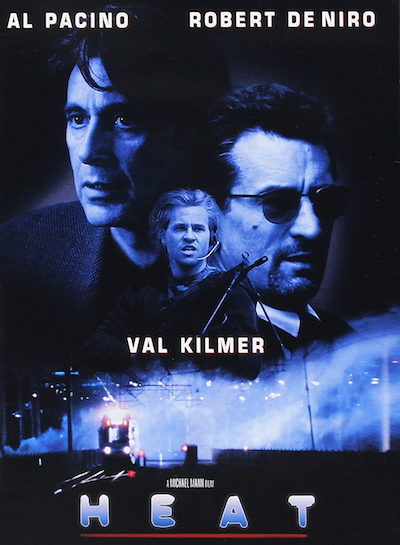 It's one of the finest crime dramas I've ever watched, and is noteworthy for its big gunfight scene.  This was particularly realistic because the director, Michael Mann, brought in former British SAS soldier Andy McNab to train the actors and choreograph the action.  It's so realistic and true-to-life that it's been used - and, as far as I'm aware, is still being used - as a training aid for US military Special Forces and police SWAT teams.  (If the embedded video below doesn't load, you'll find it here.)

What a lot of people don't realize is that Heat was based on a real-life crime story.

In 1963, detective Chuck Adamson sat down in a Chicago coffee shop with a convicted bank robber. Rail thin and with careworn features, career criminal Neil McCauley had spent some 25 of his 49 years in and out of prison for a string of crimes ranging from theft to murder. But in spite of his repeated brushes with the law, McCauley had no intention of going straight.

The conversation between the cop and the criminal, as recounted by Adamson himself in The Making of Heat, could have come straight from a Hollywood thriller:

Adamson: Why don’t you go somewhere else and cause trouble?

McCauley: Well, look at the other side of the coin. I might have to eliminate you.

One year later, McCauley and his gang followed a security gang to a supermarket, before storming the building and seizing a large sum of cash. Unbeknown to them, Adamson had been on their trail for weeks, and was now sitting outside the building, waiting for McCauley and his gang to leave. They well knew that any attempt to apprehend them inside would result in a bloodbath (“There were too many people… God, it would have been awful,” Adamson would later recall.)

As the crooks attempted to flee the scene in a getaway car, Adamson and his partner opened fire. An on-foot chase ensued, with McCauley ultimately brought down on a local resident’s front lawn by one of Adamson’s bullets. It was an abrupt end for one of Chicago’s most prolific career criminals, and McCauley’s story would eventually be retold – albeit in fictionalised form – almost exactly 30 years later in Michael Mann’s crime thriller, Heat, that stark exchange above forming the basis of its similarly intense meeting between Pacino and De Niro.

I'm going to make time soon to watch the movie again.  I don't watch many films, and I don't enjoy most of them, but this is a noteworthy exception.

And yet much of the plot was recycled from the 1980's TV show "Crime Story" which was also a Michael Mann product.
Starred Dennis Farina, former Chicago Cop, in the role played by Pacino in the movie.

Yep, one of my favorite movies and it's sitting on the shelf.

I'd never heard of this before. That may be because I was in Minot, N.D. then, and the year after...

Yep, Adamson's story has been on TV and in Heat, thanks to Michael Mann. Good movie.

Fugetaboutit. It may be a great movie, but right now, in the year of The Coup, you should be blogging about the biggest crime ever in our nation, the STOLEN ELECTION. We are about to lose our right to free and fair elections. Much more important than any movie review. If we can no longer choose our leaders and representatives, we are slaves. You should be telling everyone to call their U.S. senators and representatives and demand that they object to the stolen election. I read your blog every day and I like it. Please excuse my rant. Carry on.

It may be used to train those who may need to know these tactics, but it features the Commie/Socialist/BrainDead one-trick pony Bob deNiro, whom I refuse to watch anymore.

Everybody is entitled to their opinion - even communist celebrities like DeNiro. But when you bring your politics into a venue that should be devoid of politics, i.e. the Oscar ceremonies, well, let's just say you go to the top of my boycott list.

And that's a shame because DeNiro is otherwise a pretty good actor. (...unlike Babs Striesand and that witch Hanoi-Jane.)

One of the guys I worked with at my last job worked for a downtown LA law office and was in on a weekend, preparing for a trial. He'd seen some information about a movie that would be filming that day, but didn't pay much attention to it (they're pretty common in that area)...until what he thought was WWIII suddenly erupted just below his window.

Once he stopped nearly shitting himself, he got a front row seat to them filming the bank heist shootout.

Righteous Kill was a better movie.

I just watched this again but with the wife who has taken a liking to Michael Mann content. We're re-watching Miami Vice.

Something that occurred to me watching HEAT for I guess the 4-5th time....it's not just a movie about cops and robbers. It's also about the spouses that they have and the lives they have that are broken by the crime/crime fighting that those folks perform. It's such a large thread through the movie, from the issues Chris has with his Wife, to the rocks that Vincent's marriage are on to Neal's start and stop with Eady.