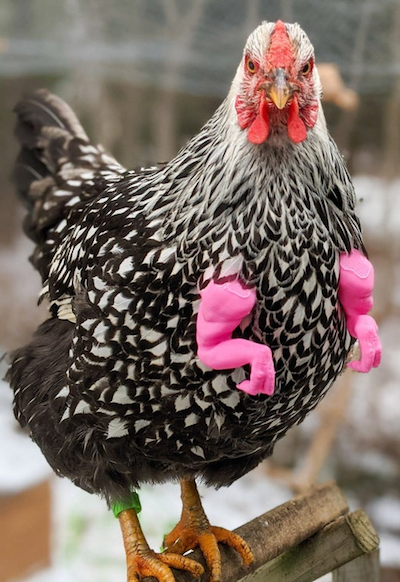 Yes, those are pink T-Rex arms . . . attached to a chicken (admittedly, a descendant of the dinosaurs, although T-Rex might have snorted at the comparison).  They're apparently a thing - a best-selling thing among chicken fanciers, if reports are to be believed.

I've heard of "buffalo hot wings", but never of "T-Rex dinosaur wings".  I wonder what sauce should be used on them (the real thing, that is)?  Considering that their critter of origin is extinct, "ghost pepper" sauce might be appropriate!

Funny, but I doubt it. Any anomaly, and I mean any, will cause the hen to get pecked to death by her mates. I raised thousands of them. It was like a public school mean girl gang.
Jen

I like! Many (MANY) years ago, I spent three summers on my college's Poultry Farm. (Yes, I was into poultry husbandry, until they caught me at it. That's a JOKE,son; I say, that there's a JOKE.) Cleaning out the dropping pits; putting them into cages to take out to the range, driving them from the cages to the range (until they spooked and scattered). I could wear a pair of jeans two days, and then they HAD to be washed and dried.