War and PTSD, and how a marriage can help to heal it on both sides

Miss D. and I have an unusually in-depth and trusting relationship, in our experience of such things.  We work hard at mutual communication, striving to understand each other and help each other over any "rough spots" caused by past problems or cultural clashes.  (The fact that I was born and raised in immediately post-colonial-era Africa, and she's an American "military brat", should immediately highlight some of those complications!)

Back in 2012, when she asked me to watch the movie "Act of Valor" with her, I described it as "a punch to the gut".  It unlocked an awful lot of memories I wish I didn't have, and helped the two of us to talk through them and sort out a number of unresolved issues.  (You can read her impressions about that here.  You might find it useful to compare and contrast how we experienced it.) 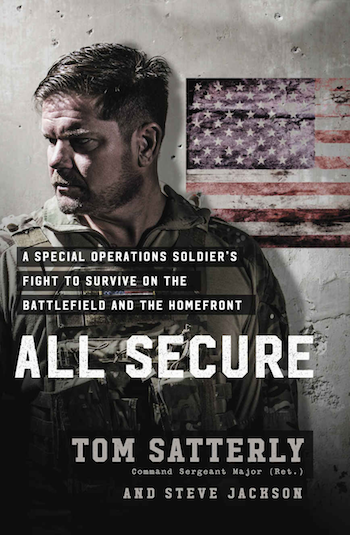 One of the most highly regarded Tier One Delta Force operators in American military history shares his war stories and personal battle with PTSD.

As a senior non-commissioned officer of Delta Force, the most elite and secretive special operations unit in the U.S. military, Command Sergeant Major Tom Satterly fought some of this country's most fearsome enemies. Over the course of twenty years and thousands of missions, he's fought desperately for his life, rescued hostages, killed and captured terrorist leaders, and seen his friends maimed and killed around him.

All Secure is in part Tom's journey into a world so dark and dangerous that most Americans can't contemplate its existence. It recounts what it is like to be on the front lines with one of America's most highly trained warriors. As action-packed as any fiction thriller, All Secure is an insider's view of "The Unit."

Tom is a legend even among other Tier One special operators. Yet the enemy that cost him three marriages, and ruined his health physically and psychologically, existed in his brain. It nearly led him to kill himself in 2014; but for the lifeline thrown to him by an extraordinary woman it might have ended there. Instead, they took on Satterly's most important mission-saving the lives of his brothers and sisters in arms who are killing themselves at a rate of more than twenty a day.

Told through Satterly's firsthand experiences, it also weaves in the reasons-the bloodshed, the deaths, the intense moments of sheer terror, the survivor's guilt, depression, and substance abuse-for his career-long battle against the most insidious enemy of all: Post Traumatic Stress. With the help of his wife, he learned that by admitting his weaknesses and faults he sets an example for other combat veterans struggling to come home.

Miss D. reports that it's a thrilling book as a memoir, and a gut-wrenching account of how post-traumatic stress disorder almost destroyed CSM Satterly until he - with his wife's help - learned to cope with it.

Jen Satterly has also written a book about lessons learned in dealing with PTSD with and through her husband.  It's titled "Arsenal of Hope". 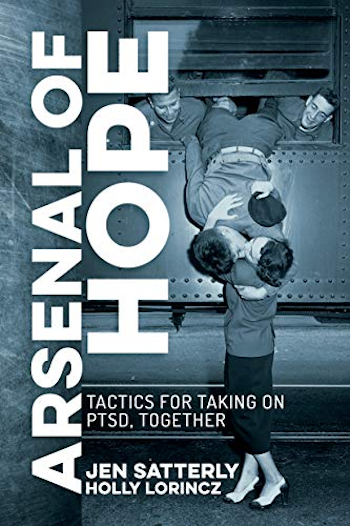 This book provides definitions and real-life examples of complex PTSD and complex secondary PTSD (seen in a rapidly rising number of spouses and children), and the problems that arise when untreated. Arsenal of Hope aims to help soldiers, first responders, their families, and civilians with trauma—including those dealing with COVID-19 chaos or death.

Jen Satterly is a certified coach and respected authority on PTSD, having been embedded with Special Operations during large scale military training missions and married to a Delta Force Command Sgt. Major. As a cofounder of a nonprofit for warriors and their families to heal after the trauma of war, her stories, research, realistic advice, and sometimes humor, are told through a military lens. Written with award-winning collaborative writer Holly Lorincz, Satterly uses her firsthand knowledge and medical expertise to deal with each issue. Most importantly, she illustrates how to change and create habits to circumvent the symptoms of post-traumatic stress.

I haven't read either book, not because I don't want to, but because I've had so much else on my plate that my "To Read" pile of books has got completely out of hand.  If I stopped working today and did nothing but read until I'd got through it, it'd take months.  Sadly, that means the Satterly's books remain on my "To Do" list.

However, Miss D. understands quite a lot about PTSD, partly through talking with me and other combat veterans in the North Texas Writers, Shooters and Pilots Association, and partly through her "military brat" background.  She regards both books as masterpieces, really useful attempts to talk through a subject that's all too often shuffled aside and not confronted as it needs to be.

She's written an in-depth summary of what she's learned from both books.  You'll find it at her blog.  I highly (very highly) recommend that you click over there and read it, and then consider buying both books yourself.  I think it's a very important subject, and one too often neglected by too many.

You can read 2 books out of order. Especially important books. Just sayin'.

I understand that you want to write (produce) over reading (consume) but circumstances - like dealing with Covid, the sequel - should be taken into account. Read while you are getting well, instead of trying to work.

As WSJ noted, you can change reading order by priority. Would reading those books improve your outlook, increase your efficiency and help your life? If so, do it. How to know? Ask your wife.