A blast from the New Deal past

I'm sure many readers are familiar with a cartoon from the Chicago Tribune dated 21st April, 1934.  It was widely re-published early in the Obama administration by sources and outlets opposed to its policies, and it looks like it's doing the rounds again as the Biden administration's so-called "Green New Deal" policies are implemented.  Click the image for a larger view. 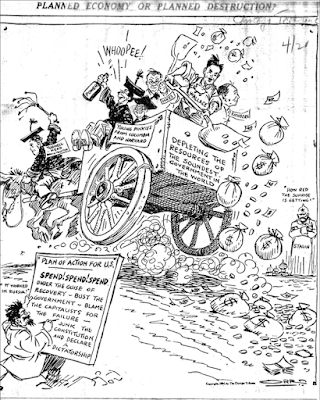 If you'd like to know more about the background to the cartoon, and the political personages lampooned in it, you'll find a description here.

What I find most apposite about the cartoon is that it's completely accurate in what then-President Roosevelt advocated, and his "New Deal" implemented.  The US government did "Spend! Spend! Spend!" as hard as it could - and it didn't help.  It took World War II to overcome the Great Depression, and while the war caused even more spending, it also brought the antidote to that spending - "Produce! Produce! Produce!"  Economic output soared, and that output absorbed and (in due course) paid off all the extravagant expenditure that had preceded it.  Note the national debt before, during and after the war years (click the image for a larger view): 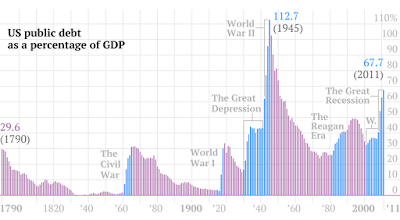 The whole point about the massive debt incurred to win World War II is that the USA's economy grew to match it, and produced its way out of the debt and paid it off.  Since the so-called "great recession" of 2007/08, we have not grown our economy's production;  rather, we've imported more and more from other economies, using the "funny money" dollars created out of thin air by the Federal Reserve.  They've benefited from that:  we haven't.  Our domestic economic activity and production has not supported those "excess dollars".  They didn't produce sufficient additional economic activity to justify their creation.

That's why the 1934 cartoon is so apposite to our present situation.  We're spending like there's no tomorrow, but in the absence of equivalent growth in our economic output, there's no guarantee whatsoever that tomorrow's economy will be able to pay off today's debt.  That's what the "New Deal" looked like in 1934, too - and it took the most destructive and widespread war in the history of humankind to change that.

Will we need something similar to balance our books this time?  God forbid!

WW2 did not end the great depression. It did cause lots of production, but the production of war material is worthless in improving the standard of living of Americans. We had to have those at that point in time, but tanks, bombs and fighter planes don't provide food, electricity, a car for your wife or a dress for your daughter.

During the WW2, the USA still was in the grips of a severely reduced standard of living (abeit with decreased unemployment). Could you buy a new car? A hunting rifle? As much gasoline as you could afford? A box of new sporting ammunition? No! Look at some of the old magazines from the time period... the ads are quite funny. There are ads for cars, washing machines, etc that say... "Our products are great! Too bad you can't buy them right now! After the war is over, come buy our products!"

The great depression did not end until the war was over and the government took their death grip off of the economy. Then producers were allowed to make products people really wanted. The government stopped screwing around with the economy and it healed itself.

After the war, not during it.

@Unknown: Sorry, but you're wrong there. The US economy in total improved immeasurably due to increased wartime production. Sure, production of consumer goods was strictly controlled, but that didn't stop overall economic output from booming. The consumer economy didn't get a lot better until after the war, but that doesn't describe the economy as a whole.

Part of the reason the US economy exploded after WWII is that our economy was one of the few NOT devastated by the war. Europe lay in ruins. The better off Asian nations were also suffering.

Because the war largely left the US economic capability untouched, it was the United States that was able to produce to rebuild what was destroyed. We enjoyed years of a head start on everybody else.

I hope and pray such a situation does not come again because of what it would mean globally.

Your chart is outdated (2011). Debt to GDP is now very close to its peak in WWII...just under 110%, and there is no apparent rebound to bail it out now.

@CDH: No, the chart isn't outdated. I put it up to illustrate the US economy before, during and after World War II. It does that perfectly adequately. What happened in the last decade is irrelevant to this article.

Wolrd War Two did not pull America out of the depression, the economy had already largely recovered due to actions taken by Roosevelt as part of the New Deal, but the Republicans had been right to emphasise that all of the various government initiatives to control prices should be temporary. The public were also at a point where they were in agreement with this.

The legacy of the Depression was the permanent infrastructure it created with unemployed men's labour - The TVA, the Hoover Dam, the Muscle Shoals project, the Civilian Conservation Corps, all of those public schools that all got built in the thirties to replace firetrap timber shacks. The Tennessee Valley Authority in particular, demonstrated the high prices Americans elsewhere were paying for say, electricity or agricultural fertiliser. (The Muscle Shoals scheme was sold on the fact it could be quickly repurposed for armaments production, yes, conceded, but it's goal was nitrogen fertiliser.)

The Republicans spent the thirties lamenting FDR and government bloat, wearing "Hate Roosevelt" badges, and doing exactly what you are doing - Insisting it "wasn't working," even though infrastructure takes time to reveal benefit, and because it was patently untrue to the man on the street: People had more money, farm prices had risen, and the other day, guess what, I saw a N*gger driving a car, whatever next! Something had gone right and it wasn't just the invention of social security, which the Democrats were categorically emphasising to buy votes.

Few people think to contemplate how an electrical power dam in Nevada, that would otherwise not have been built due to local utility profiteering, is the reason why the local factory is now hiring again. They can afford the electricity to run a night shift. The GOP's only serious point - That these programs had to end at some point - Was only sold to the public when Wendell Wilkie became a serious Presidential candidate by *conceding,* to the hatred of the party leaders, that the infrastructure parts of the New Deal had worked.

World War Two had nothing to do with any of this. That America could afford to fight was one reason why, eventually, it did. Isolationism is perfectly sensible if you have no money.

Now. Seriously. Please tell us you're not one of *Those* white people who never admits he's wrong about anything?,,,,,

Tom - It heavily rode upon them in respect to their broader effect upon jobs and the general effect of consumer goods prices. Joining the CCC and the Hoover Dam project did provide your family with an income. With improved economic conditions, public interest in welfare programs was ending: - Hence Wendell Wilkie.