Not your average romance novel . . .

Mark Longmire is a graphic designer in Knoxville, Tennessee.  At his Web site, he pokes fun at various and sundry aspects of modern life - including the rather over-the-top covers used to sell romance novels.  Here's a montage of some of his variations on that theme.  Click the image for a larger view. 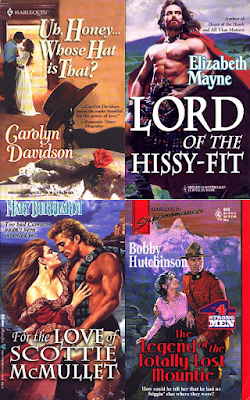 There are more at the link, as well as additional examples submitted by his fans.  Some are not safe for children, but they're all amusing.  A tip o' the hat to Tiffanie Gray on MeWe for introducing me to his work.

I don't write in the romance genre (I wouldn't know where to start - I'm a bit too down-to-earth for that stuff), but it's highly lucrative for those who succeed there.  I know one former Marine artillerist who's active in that field, writing under a pseudonym (feminine, of course).  If his readers only knew that the writer making them sigh heavily was a manly cannon-cocker instead of a ladylike bosom-heaver . . .

There's a Book of Faces page, Paperback Paradise, that does similar stuff.