One of the scariest financial graphs I've ever seen

This graph comes to us courtesy of Zen Second Life.  Click the image for a larger view. 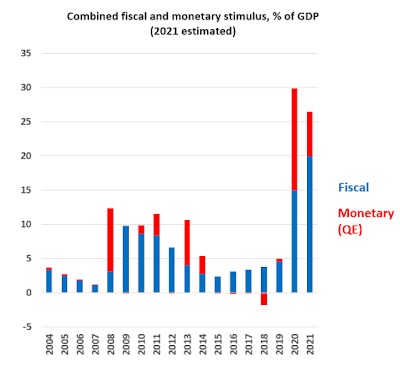 Note the red, indicating "quantitative easing" (i.e. the Federal Reserve "printing" money, creating it out of thin air, to ease liquidity crises and boost the economy).  Note that there is no real economic value or activity underlying those red bars:  it's "imaginary money", existing only because the Fed says it does.  In an orderly economic system, under classic Keynesian theory, that "imaginary money" would be siphoned out of the system as soon as it had recovered, so as to "balance the books" and return to a system of underlying value.  It would have been shown by red bars beneath the zero line in the graph from 2014-2019.  This was not done.  The "imaginary money" from 2008-2014 was left in the system, destabilizing it.  It's become catastrophically worse since March last year, as the graph shows - and it's equally unlikely that the latest stimulus measures will ever be retracted.

In Japan and China, gamblers have already learned the hard way about trusting central bank sponsored delusion. So far the U.S. has dodged that fate by creating ever larger and more lethal bubbles. Those who keep betting on these dumb money bubbles will wake up to the inevitable reality that there is no one on the other side of the trade.

The unbreakable faith true believers have in common is the belief that central banks are omnipotent. Because everyone knows that printed money is the secret to effortless wealth.

It's the same type of Disney thinking that now abides the skyrocketing addiction epidemic. When times get hard simply dial up the drugs and alcohol to level '11' and hope it all goes away. It's an infantile strategy for an infantile society totally incapable of accepting reality.

This is a fully synthetic recovery with no plan for how to recover from the fake recovery.

Between the insane stimulus, the narrow breadth, and the lack of economic activity, this is by far the most specious recovery in U.S. history.

And it's now running on glue fumes.

In summary, epic meltdown from all time lines, is inevitable.

The reason house prices, share prices, etc. are all continually rising is that the "funny money" created by the Federal Reserve (the red in the graph above) is funding the increase.  More and more empty, valueless dollars, created out of thin air without any underlying economic value, are chasing whatever they can buy that does have economic value.  That's the very definition of inflation:  more money chasing the same amount of goods.  What happens when all those "funny money" dollars are exposed as having no underlying economic value, and therefore become monetarily valueless?  Just look at how much the dollar has declined in value over the past century or so.  Expect an even greater collapse in the not too distant future, as the Fed's economic chickens come home to roost.

I used to wonder why our political and economic authorities couldn't see this reality staring them in the face.  I no longer wonder that.  As Charles Hugh Smith observes, they've become so addicted to this never-ending supply of "funny money" that they can't do without it anymore.

The "recovery" has an unfortunate but all-too accurate connotation: recovery from addiction. The "recovery" we've been told is already accelerating at a wondrous pace does not include any treatment of the market's addiction to Federal Reserve free money for financiers; rather, the "recovery" is entirely dependent on a never-ending speedball of Fed smack and crack and a booster of Fed financial meth.

The addiction to Fed speedballs had already turned the entire financial sector into a casino of lunatic junkies who delusionally believe they're all geniuses. Beneath the illusory stability of the god-like Fed has our back, the addiction to free money has completely destabilized America's social, political and economic orders by boosting wealth and income inequality to unprecedented extremes.

While it's convenient to blame the carnage on the response to the Covid pandemic, the damage to the speedball-addicted financial system had already reached extremes before the pandemic: the addiction began decades ago, but like all addictions, the amount of stimulus needed to maintain the high keeps expanding, and eventually the need can't be met without toxic doses: then the junkie / addicted system collapses.

The problem with addiction is you're dependent on the high, no matter what the eventual consequences may be. Long-term consequences are ignored because all that matters to the addict is to get the next Fed speedball and throw it on the gambling table to keep the high going.

Our entire economy is now dependent on ever-expanding speculative gains. Should the casino winnings falter, our economy will crash, and given the primacy of money and consumption in our society and political system, the financial collapse of the Fed's casino lunacy will sweep those systems over the falls.

In this delusional state of supreme confidence, the addict loses touch with reality, i.e. the fatal consequences of the addiction. That's the detour we've taken in becoming addicted to the Fed's free-money speedballs. Now the rutted road has ended in a trackless wilderness. There is no way back and no way forward. The addict's addled confidence will push them into the ice-cold river, and as they're swept over the falls, the realization that it was all a drug-induced delusion will come too late to make a difference.

You and I are already seeing the consequences of this addiction in the falling purchasing power of the dollars in our pocket.  Our wages and salaries have not kept pace with the true inflation rate (which has been grossly miscalculated and understated by government for decades) since the 1980's.  We're now seeing true inflation running at or over 10% a year for many consumers, and it's getting worse, fueled by far too much "funny money" in the system.  Sadly, for many of us, we couldn't keep our heads above water without the aid of some of that "funny money".  Just look at the number of renters who've lost their jobs, and would be evicted but for COVID-19 moratoriums on eviction, or those who depend on Federal government-boosted unemployment benefits, or those who need their (infrequent) stimulus checks to survive.

It's a mess - and it's going to get worse.  As I've said many times before, batten down your hatches and make the best preparations you can.

This isn't going to end well.

The eviction moratorium will crush the small landlords, especially those who financed their purchases, the reno to rent plan which worked for many years, where the renters would pay off the loans, allowing the landlord to plan for a retirement income 20 years out. These guys will be gone, clearing the field for the large investment bank owners to get property cheaply.
On the money side, we're screwed. Those who can will exit currency for hard or productive assets, and will try to own them outright, see, for example, Bill Gates buying hundreds of thousands of acres of farmland.
The financial panic is not here yet, but will occur when the ordinary MSM viewer realizes how screwed they are. Bad times.
John in Indy

America is toast, and the elites don't care because their money is offshore.

So far the actual rent payment rate is pretty good in the US.

And in areas evictions are finally happening.

It's worse than this.
If you've been following the Gamestop stock fiasco, you've learned that a great many (likely even a majority) of the stock shares being sold on the markets don't actually exist.
Bonds, if anything, are even worse.
And most of the moves made by major financial players seem to be a game of hot potato with toxic assets.
Who's going to be holding something of actual value when the music stops?
I don't know.
But I'm absolutely positive it isn't us.