Toronto, Canada police have a Twitter account titled "Toronto Police Service Guns Seized".  It provides images of every illegal weapon seized by that force.  Most of them are routine, of course;  but now and then, a picture comes up that makes one do a double-take.  Here are a few of them.  Click each one to be taken to the tweet concerned, and read the responses to them.  (The first one has attracted more than its share of leg-pulling.) 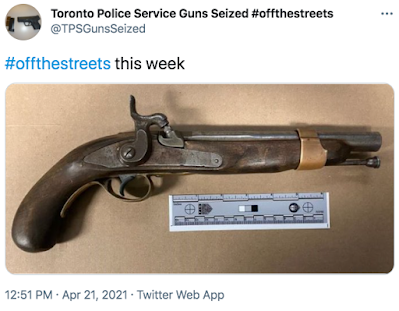 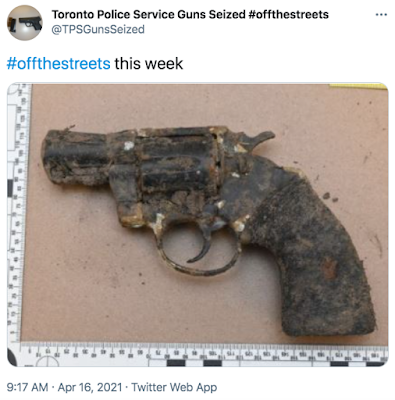 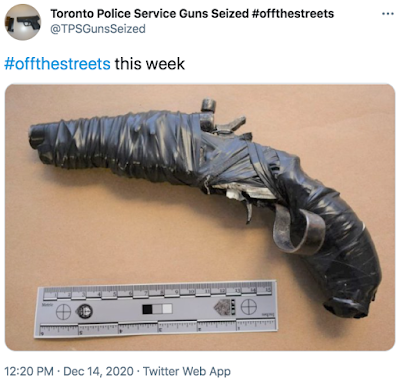 I don't know that I'd dare fire either of the last two, for fear of their exploding when I pulled the trigger!

I know many similar photographs can be found of guns confiscated in the USA, but this particular Twitter account came to my attention, and those images made me wince.  I thought you might enjoy (?) them, too.

And not a single machine gun in the lot! I am...disappoint! But hey! A quart of rum will do me!

Enjoy is not quite the right word, but I don't know what to use.

To add to the weirdness of this...

Back in the late nineties during the failed attempt to register all firearms, the RCMP proposed to classify the breach plug part as the receiver on muzzleloaders. This ended when it was pointed out by several firearms groups that a breach plug is nothing more than a bolt and if they proceeded, they would have to require every bolt imported, or made, in Canada, to have a unique serial number.

I read "Toronto Police Service Guns Seized" as someone had seized the cop's guns.