Ma’Khia Bryant wasn't an innocent angel, and neither are her parents

The rush by some (including senior politicians and leaders who should know better) to canonize the late Ma'Khia Bryant - shot by a police officer to prevent her stabbing another young girl - is both nauseating and factually wrong.

Black Lives Matter and its hangers-on appear to be trying to make her into another George Floyd, as evidenced by this tweet.  Click the screenshot for a larger view. 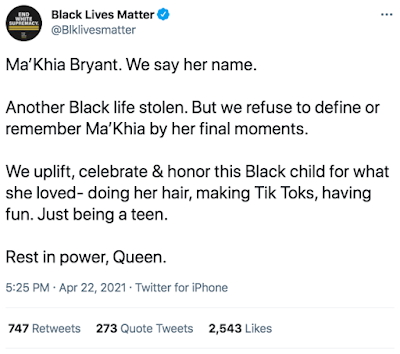 The same rush to judgment is being found among liberal, left-wing, progressive politicians and organizations across the country.

However, far from the innocent young ghirl portrayed by such activists, Ms. Bryant was trying to kill or seriously injure another person when she was shot.  Her intended victim has since thanked the police for intervening.  Ms. Bryant and her sister were in foster care at the time, which does not appear to have been a happy situation for either of them.  Precisely why they were in foster care, rather than under their mother's care (which had presumably been found by the authorities to be inadequate or lacking in some way), has not been disclosed.

What's more, Ms. Bryant's mother - who's making the rounds of the news media protesting her late daughter's angelic and peaceful nature - emerges as anything but credible.  The text below is taken from a long blog article that intersperses it with evidence - screenshots, photographs and videos - to prove the author's claims.

Paula Bryant blamed the cops for the death of her daughter while taking no accountability for herself, despite the fact that her troubled child was in foster care and instigated the entire incident which was all caught on film.

However, as it turns out Mom is a liar, her father was involved in the fight, and both of them have a long and documented criminal history.

Ma’Khia wasn’t on the honor roll at Independence High School, where she was far from the only child who had the misfortune of having parents who put apostrophes in their names.

She didn’t even enroll in the school until February.

It took three minutes of Googling to figure that one out. Although it isn’t the biggest deal that Paula Bryant lied about her honor roll daughter, it does establish that 1) she can’t be trusted, and 2) the media will blindly repeat anything that makes the victim of a police shooting look good.

Paula Bryant was charged in 2004 with domestic violence and assault. The charges were ultimately dismissed after she plead guilty on amended charges.

In 2010 she was charged with domestic violence, assault, and endangering children. She plead guilty on an amended charge.

Maybe if she didn’t assault people and endanger her own children then her child wouldn’t have been in foster care in the first place.

In the video you can see Ma’Khia storm out of the house and run one of the other girls over. You then see a man come out of nowhere and kick the girl in the head while she’s down as Ma’Khia goes to stab the girl in the pink.

That man is apparently her father Myron Hammonds, who’s a real gem himself.

You can hear him right after the shooting at the 4:35 repeatedly yell, “that’s my baby,” and “Is you stupid? She’s a kid!”

Ma’Khia was having problems with the two girls she attacked because they used to live in the foster home, stopped by a lot, and criticized Ma’Khia for not making her bed and keeping the house clean. She reached her breaking point, and before someone called the cops she called up her father to help her take care of the other girls.

Myron Hammonds has had a warrant out for his arrest since January.

He has a long and documented criminal history.

He plays the loving Dad on his Facebook page, but he had to be taken to court to prove that he was the father.

If Myron Hammonds hadn’t kicked that girl who was on the ground then Officer Reardon would’ve been able to direct all of his focus on Ma’Khia, and perhaps he could’ve taken her to the ground before she got near Tianna Bonner.

If Paula Bryant had obeyed the law and raised her kids properly instead of getting arrested for endangering them, then Ma’Khia wouldn’t have been in this situation in the first place.

There’s lots of blame to go around here, but none of it belongs with the police. As long as we pretend that America has a policing problem and not a parenting problem then we’re never going to address the root cause of shootings like this.

There's more at the link, including additional evidence.  Kudos to the blogger concerned for doing his research and documenting every step of it.

I'm truly sorry that Ma'Khia Bryant is dead.  Nobody should have to die like that - but there are some who choose that fate for themselves, literally forcing the police to act against them in order to protect other innocent people.  The available evidence overwhelmingly suggests that this is precisely what happened in her case.  As for her parents, I'm sorry for their loss - but where were they when their daughter needed positive, supportive, exemplary role models?  It's too late now.

If the evidence cited above is correct, then I think we all know where the late Ms. Bryant got the inspiration and example for her actions;  yet now her parents are gushing praise for her, and threatening to sue the officer and agency responsible for her death.  I think that would be a travesty of justice.  It's even more pathetic when one notes that one person publicly pushing for such a lawsuit, Donnie Bryant (said to be her cousin), is a city councillor for Mansfield, OH, who recently lost a mayoral election there.  He said at the time:  "Politics is in my blood. I am just going to continue doing what I am doing. I am not sure what I will do next, but I do plan on staying active in politics."  He's now publicly eulogizing Ma'Khia Bryant and criticizing the police.  Dare we suggest that he might seek to take advantage of the death of his cousin as a springboard for his future political career?

It's getting to the point where, in almost any criminal matter, one has only to listen to what liberal, progressive, politically correct sources are saying about it in order to be sure beyond reasonable doubt that the truth lies in the diametrically opposite direction.

I'm wondering if, perhaps, she was a "special needs" person having some kind of "major meltdown", and was simply "losing it"
...like, if someone who knows her better was there they might have been able to calm her down before the situation got so out-of-hand.

180 out is pretty much the norm with any statements made by the media/wokies/BLM these days... They were ALL choir boys/girls turning their lives around.

If she was “special needs”, there was no one there to help. Her pappy was off to the side, kicking someone’s head in, so he was no help. Thus, the cops came in on a “Stop the Threat, RFN” situation.

Paula Bryant is trying to cash in on the ghetto lottery.

I am not sorry. At the most, I am cautious.

Because I know people who have had horrible childhoods and didn't and haven't called their sperm donor over to help kick and kill others.

Sad to say, she went to the Hall of Judgement and it probably didn't go well for her.

As to her biological genetic-providers? Same. Same same same.

An adult grown-ass man kicking a child in the head? That's attempted murder in my books and ending his life with a plumbum and cupric suppository would also be quite justified.

Not even getting involved in crack-whore mother's life. Seen that all too often in my area.

Ma'whatever was a wolf-child. No human mores or morals. Feral at best. Her life will not be missed. The world is most likely a far better place for her taking a dirt-nap so early.

What's truly sad is... my reaction to her dirt-napping? A resounding "GOOD!"

And they want their own schools and their own businesses and their own every thing. At this point, give it all to them. And then put a fence around the whole damned lot.

Want to be part of civilization? Then try to act civilized. This... This is not acting civilized. This is, as one blogger says, "Africa wins again." Feral stupidity at its finest. So much stupidity even one idiot squeeky-shoes basketball player got sucked into the well of stupidity, showing that even though he's had a silver spoon in his mouth since at least 11yoa, he's nothing but another feral.

Hey, Lebron, want to be treated like an adult? Then comment on it. Say something like "It's sad that the state of black parenting is such that this isn't an uncommon problem." And then use your influence and money to try to change the ghetto culture. But, no, you're too busy ignoring what the ChiComs are doing because that's money in your pocket.

I could get really rude about what I am saying, but in respect to the blog-host, I won't.

But every time a feral takes a dirtnap, the world gets slightly brighter.

Tal Hartsfekd, there was someone there who knew her better: her father. He was too busy kicking the girl in the head whom M'Kia had thrown to the ground

Go buy another mansion in a rich white neighborhood, Queen.

Pretty much everyone we know to be in her life was at the scene. Foster mom, real dad, foster sibs.

The irony of her (biological) father viciously kicking the downed girl in the head, punting her into the air, then asking the officer who shot "his baby" if he was stupid, is strong. But the media already has the "facts" it wants to keep the narrative going, so the inconvenient facts which led up to this "martyrdom" are ignored.