I (and many others) have been saying for years that official inflation statistics are meaningless, bearing little or no resemblance to what you and I see every time we go shopping.  There are many reasons, but one of the contributing factors is that bureaucrats presume that consumers will substitute cheaper goods for more expensive ones if some prices rise.  (This may not always be possible, of course, but they don't care about that.  Their priorities are to portray the economy as their masters wish them to, not as it really is.)  They also use weasel techniques such as "chain pricing" to hide the reality of actual price increases.  According to Wisegeek:

A chain price index is a specific method of measuring changes in prices over time. It does not use a fixed reference point to express each figure as a percentage. Instead each period is expressed as a comparison to the previous period. A chain price index for easier at-a-glance reference and also allows for changes to the method used to calculate the prices.

Under this system, the price figure for each period is expressed as a percentage of the price figure from the previous period. In the $200/250/320 USD example, the first two year's index figures would remain as 100 and 125 but the third year would now be based on the second year, changing the index to 128. This makes it easy to see that the change from the second to third year is proportionally only very slightly above the change from the first to second year. The name chain price index comes from the fact that each comparison between consecutive periods can be chained together to make a consistent and comparable series of index figures.

There's more at the link.  Highly recommended reading if you've never encountered the concept before.  It's how the government pulls the wool over our eyes by not revealing the actual rate of inflation, as we'll see in just a moment.

In particular, a chain price index does not show actual price changes, but only proportional price changes.  It doesn't reflect the amount that comes out of your and my pockets when we buy something, but shows that as a proportion of what we paid the year before, or the decade before.  It's a neat way to hide actual dollars and cents. 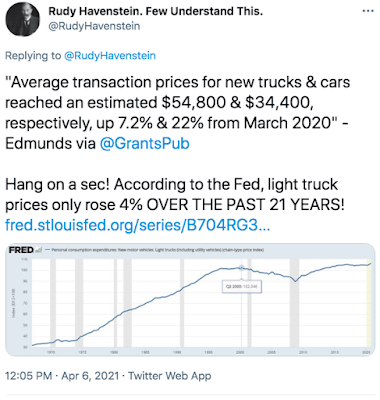 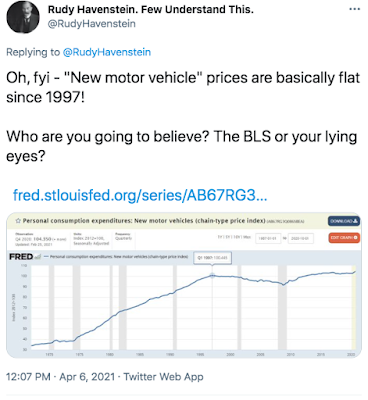 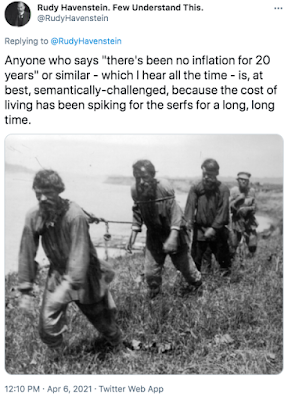 The two Federal Reserve graphs shown in miniature above are reproduced below.  Click each one to be taken to its Web page.

That's the reality of "official" inflation figures.  As you and I know full well (from buying them), light truck and other vehicle prices have increased many times more than the Fed's graphs show . . . but they'll claim, with a straight face, that their graphs show reality better than our pocket-books, because they're "more accurately calculated" (or some such bull).

That's how the authorities are deceiving us, and that's why official figures about the economy are simply not trustworthy.

Add to that medical costs, health insurance costs, housing, taxes and college prices, and you might just think the government is lying to us all. But we get a cost of living raise in Social Security based on the government figures, so that is not keeping pace, to say the least.

Of course they have to keep the "official" figures low - otherwise they couldn't afford to pay the benefits they promised!

Yes, vehicle prices are getting ridiculous, which is why the average age of a vehicle in the US is getting older and older. A significant part of the price rise is due to government mandated "safety features" and pollution controls (especially on diesel vehicles).

They've been lying to us for years.

I first noticed in the Obama administration when they monkeyed with the U-3 unemployment numbers. Claiming 5% unemployment, when it was really 10%+

Back then, I knew it was BS, since I had nearly 1/2 dozen dudes I knew out of work, some took years to getback on their feet. Some never did, limping along until they could "retire".

I don't hardly pay attention any more. They'll keep lying and kidding themselves until it all collapses, and we see the rotten structure that was holding the fraud up.

Unemployment rate was what destroyed the press credibility for me, and made me a lot more cynical about the news.

I had a similar experience knowing first hand how hard it was to get a job 20+ years ago, yet reading newspapers about how low the unemployment rate was. Which is why I no longer read newspapers. I hate being lied too.

One data point: I have had a repairman from the same company out to perform the same repair on the same dishwasher, five years apart. The price this time is just over double what it was five years ago.

Had a builder in the other day. Sheets of plywood for home building have tripled in the past year. He said he's quoting crazy prices to people and they're telling him to go ahead and build. There's so much (borrowed/created) cash slopping around that there's no real restraint. Material bids are good for three days. The boom is amazing. The inevitable crash will be spectacular.

"Who are you going to believe: our official figures; or your own lying eyes?" - every government official, since Ever

Bonus points for noting they calculate what you owe for taxes in real dollars, but calculate what they owe you in entitlement payments based on their Official Figures.

People who listen to the government are a lot like fools who spend their money to play carnival games, and for the same reason.

"I have had a repairman from the same company out to perform the same repair on the same dishwasher, five years apart. The price this time is just over double what it was five years ago."

I see your dishwasher repair and raise a pipe cleanout.

5 years ago or so, I'd pay <$100 to have a drain unclogged. Dude would come out, hook up the big snake, run it through and leave.