"Woke" politics threaten the workplace, and must be driven out

Two reports on Monday caught my eye.  Both illustrate the dangers of tolerating "woke" employees and ideas in any organization:  inevitably, the "woke" will try to take over, actively or passively, and bend the organization to their interests.

First, Basecamp announced that political discussions would be banned from the workplace.

Political discussion at work is “a major distraction” that “saps our energy, and redirects our dialog towards dark places,” Basecamp’s co-founder and chief executive officer, Jason Fried, wrote in a blog post on Monday. “You shouldn't have to wonder if staying out of it means you're complicit, or wading into it means you're a target.”

As with Coinbase’s announcement, the new rules from Basecamp prompted outrage from observers on Twitter and elsewhere, many of whom felt that banning discussion of politics at work sends the message that a company doesn’t care about injustice in the world and is interested only in preserving the status quo. Basecamp’s co-founders emphasized that employees are free to engage with politics and advocacy on social media and elsewhere, and that the company wanted only to explicitly keep it out of discussions on tools such as internal workplace chat.

There's more at the link.  Two of the founders of Basecamp, Jason Fried and David Hansson, have provided additional background - follow those links for more information.

On the same day, a Twitter user describing herself as "Grace, culture war refugee" outlined how she and her husband had coped with "woke" interference in their non-profit organization.  Here are some of her tweets, consolidated into a single thread.

My husband and I co-founded a justice-oriented non-profit org 11 years ago. At the time, we knew nothing about Critical Social Justice or Critical Theory. Our motivation was to address disparities in mental health care.

We’d learned that lay people (ppl without clinical training) made up the majority of trauma care providers around the world working with vulnerable populations (refugees, human trafficking survivors, etc). We wanted to help equip those lay people with good resources.

We hired clinically trained mental health professionals to develop our curriculum, oversee MEL, and run the international training program. Everything went great for about 7 years. We got accolades from all the right people in academia and partnered with orgs in 50+ countries.

Then a few years ago we noticed a tone shift among our program staff. They became hyper-critical of *everything.* As Executive Director, my husband felt he was always on trial. Every word and action was scrutinized. We couldn’t figure out where this was coming from.

We noticed shared rhetoric among the staff. Terms we heard often:

Didn’t understand the ideology behind it, started doing some reading.

Then the open letters started. The letters always went to everyone in the org (from the graphic designer to the governing board), they always asserted vaguely that the organization was “causing harm,” and they always ended with demands. We were alarmed and confused.

We began having all-org sessions trying to discern what was happening and what was needed. It was quickly apparent there were no specific actions or incidents that could be deemed harmful. The accusations were always vague and abstract, about “identities”, “systems,” etc.

What also became apparent quickly was they didn’t want to resolve any real harm. They wanted control of the organization. They stated explicitly my husband was incapable of running an org that addresses trauma (an org he founded!) bc he’s straight, white, male, and Christian.

That’s when I learned to fight. I’d been doing my homework for a while. Thanks to people like @NeilShenvi, @ConceptualJames, @wokal_distance, @WokeTemple, @D_B_Harrison and @realchrisrufo, I knew what we were facing. It was an attempted woke subversion of the organization.

I wrote organizational position papers on how Critical Social Justice compromised our work by being in direct conflict with a number of our organizational commitments, namely, being evidence-based, valuing the individual, cultural humility, and allowing for true diversity.

Maybe I shouldn’t be proud of it, but I also learned to use their woke rules against them. When a staff member said I couldn’t speak to a topic bc I’m straight, I told her it was wrong of her to assume about my sexuality just bc I’m married to a man. She immediately groveled.

After some months, when it was clear to them we wouldn’t budge, the ones making demands left “on moral grounds,” accusing us of every phobia and calling the org “white supremacist.” We’ve always partnered with ppl of every ethnicity, creed and identity, so this is laughable.

Having survived an attempted power grab and character assassination by a woke mob, I’ll say it’s painful to be mistreated by ppl you trusted. But if you care more about maintaining your integrity than what people think or say about you, you’ll emerge with your dignity intact.

Don’t apologize for vague accusations of “harm.” It’s not a fair fight. They don’t want dialogue. Expose their inconsistencies - show how their demands won’t achieve what they claim to care about (helping the poor, etc). It’ll require some reading and a lot of courage.

If you don’t fight this nonsense now, wherever it’s showing up in your community, there’ll be nothing good, true, or beautiful to defend soon. We will be ruled by lies and power while being told we’re progressing toward truth and justice.

Open war is upon us, there is no “safe” any more. Choose which kind of “unsafe” you want. Fighting lies is always preferable to being ruled by them. I believe they can be defeated. I believe the truth will prevail.

Vox Day wrote a short book a year or two back called "Corporate Cancer", in which he perfectly describes and analyzes this sort of "Woke" takeover attempt, and shows how to defeat it. 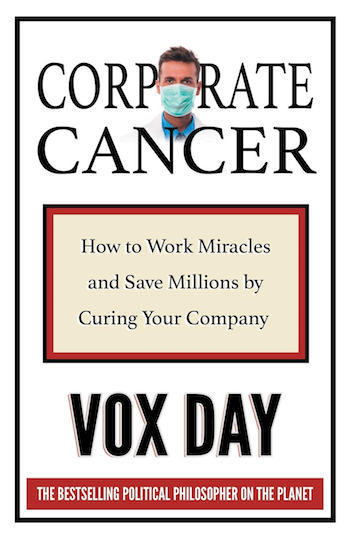 If you haven't already read it, I highly recommend it.

Yep, the pushback IS starting, and confronting the issues IS the first step!

I follow the rule of "no politics at work" not because of any claimed neutrality; there is no neutral position, but because that kind of thing just leads to division. I'll talk with people one-on-one, if I think we can have a productive discussion, but bringing it up at work makes more heat than light.

If you control your own organization, fire anyone who exhibits any signs of wokeness, immediately.

It should be, but it won't be; or at least it won't be before it has inflicted fatal damage.

Bringing politics into the workplace is unprofessional behavior, period.

"The bestselling political philosopher on the planet."

The three books in the series by vox day are a must read to survive in our modern work place to understand the culture of the social justice warrior. To them everything is political, and the ends justify the means.

"the ones making demands left".

I would not have left them that opportunity. I would have very publicly fired them on the spot.

BladeRunner1066 said...
I would not have left them that opportunity. I would have very publicly fired them on the spot.

And have them sue for wrongful termination? No no, learn the form: they desire to force the unjustly 'accused' to quit/resign from the position (clearing their path) because they do not have any actual ammunition to require the group to act. So they make it unbearably uncomfortable until the attacked decides to quit. The SJWs then win, and yet: "We're blameless! (And right!) WE didn't do anything to him; he decided to run away because of his guilt!"

This is also why: NEVER EVER apologize: because rather than an apology calming the matter (as with normal folks); the pressure on you to apologize "answering" for the unjust accusation "just to make them go away" NEVER EVER makes SJWs go away. They immediately begin a victory dance on your head because, they crow, "you just confessed! That's proof you're guilty and you knew it!" Look around, you'll see a gazillion examples of just this!

Trying to 'get righteous vengeance' by firing them in public gives them more ammo, not less. You might also read: 4th Generation Warfare Handbook by William S. Lind and Gregory A. Thiele. Know that we are no longer in 'normal' war; we are now in a war where enlisting public (feeling, belief, thought) support is (also) necessary to win. Feeling angry and reacting with that visible anger makes you merely the stronger one in a battle of feelz.

Maintaining gracious calmness and (visible) focus on the mission/purpose of the group (ha: "being the bigger man") leaves YOU a hero in the eyes of the group/public/others watching. You SAVED them! It also drives the SJWs into frothing madness: win-win! Rather than responding to a temper tantrum with a temper tantrum; you acted as an adult / gentleman AND drove off the problem. Win-win! (Besides, you ARE the better man -- the sane one, the adult! Yes?)

Working with a somewhat insane, viciously vitriolic woman in a necessary supporting department, back when I was 30+ years younger, my own manager (who ducked dealing with her whenever he could) once marveled that I was always able to maintain my calm and bearing when dealing with her, and focus strictly on the problem. He wondered how I managed to do that?! "Well," said I, "ONE of us has to be the adult. ONE of us has to manage to keep the company's goal in mind. SHE is clearly not capable of that, so it's on me. {shrug} Sure I was exasperated, and sometimes spittin' furious, when she left... but I 'won' because the company was not harmed.

Hidden condescension is a lovely feeling, go for that instead!

Good for Basecamp. We're paying you to work, not play politics.

As far as the non-profit, in my state I'd have figured out who the malcontents were and fired them as soon as I found them. This is a "right to work" state. The flip side of that is you have no "right" to your job-you can be fired for anything or nothing at all. This sometimes sucks, but sometimes it's a handy tool.