An inside view of a hurricane at sea

Saildrone Inc. and NOAA have released what they claim is the world’s first video footage captured by an uncrewed surface vehicle (USV) from inside a major hurricane barreling across the Atlantic Ocean.

NOAA and Saildrone are working together on collecting scientific data from inside Hurricane Sam, currently located some 645 miles south-southeast of Bermuda with sustained winds of 145 mph. For the project, one of Saildrone’s drones, known as the Explorer SD 1045, was directed into the storm where it battled 50 foot waves and winds of over 120 mph to collect critical scientific data and, in the process, give us a completely new view of one of earth’s most destructive forces.

The USV is 23 feet long, and can sail unattended for up to a year, gathering data and sending it back via satellite to its home base. 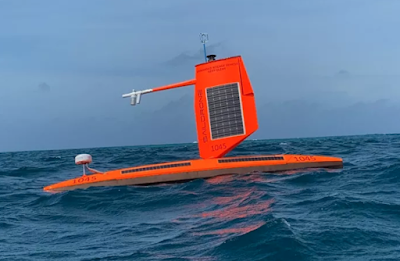 Here's what it looks like inside Hurricane Sam, from the drone's point of view.  Remember, it's no longer than a small yacht, and rather smaller in hull size.

I'm beginning to feel seasick just looking at that . . . and I'm very glad to have my feet on dry ground, thank you very much!

Wow. I am nauseous as well.

Not impressed. The only thing noteworthy is it is video from a small, autonomous, battery powered vessel. Since no part of it is visible, there is no frame of reference for scale. Video from actual boats and ships is much more informative, and entertaining.

I guess the unmanned part of the story is historic, but......

Having ridden out a typhoon, but with lower level winds, it's a helluva ride. And you find out why EVERYTHING on a ship is battened down. Seasickness is survivable. Not fun though.

Wish they had something for scale. A banana?