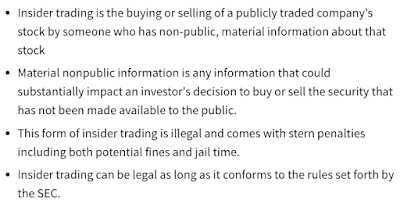 The first report details how members of the Federal Reserve have made a killing in the stock market by very (suspiciously) auspiciously-timed trades.

... Fed hawks [are] suddenly dropping like flies following the resignations of Boston and Dallas Fed presidents, Rosengren and Kaplan, amid a public outcry over their recently-revealed daytrading activities which benefited them as a direct result of monetary policy decisions they were explicitly and directly involved in ...

... the government ethics office published forms which showed that none other than the (centrist) Fed Vice Chair Richard Clarida may be the next to "retire" (perhaps he too is on a kidney transplant list) following the revelation that he was trading in and out of millions in securities on February 27, 2020 just one day before Fed Chair Powell issued an (extremely bullish) emergency statement hinting at possible policy action as the pandemic worsened ... Powell's clearly market-moving statement served to spike the market by over 100 points in minutes.

When contacted by Bloomberg, a Fed spokesman for the vice chair said that “Vice Chair Clarida’s financial disclosure for 2020 shows transactions that represent a pre-planned rebalancing to his accounts,” adding that “The transactions were executed prior to his involvement in deliberations on Federal Reserve actions to respond to the emergence of the coronavirus and not during a blackout period. The selected funds were chosen with the prior approval of the Board’s ethics official.”

Of course they were... just like the Dallas Fed was perfectly fine with Kaplan's "tens of millions" in stock trades in a year when the Fed's policies injected trillions to the balance sheet until he was busted and an epic scandal followed... just like "daytrader" Rosengren suddenly deciding to retire for "health reasons."

What makes Clarida's trading transgressions even worse, is that the Fed can't punt them on the flawed policy book of some regional Fed - these come from the Marriner Eccles building itself. The Fed spells out clear guidelines for trading activity by policy makers. Its Voluntary Guide to Conduct for Senior Officials says “they should carefully avoid engaging in any financial transaction the timing of which could create the appearance of acting on inside information concerning Federal Reserve deliberations and actions.” It also says that they should avoid dealings that might “convey even an appearance of conflict between their personal interests, the interests of the system, and the public interest.”

And yet, casting even more doubt on the Fed's integrity, ethics and especially capacity to think clearly, even the Vice Chair failed to realize that buying millions in stock ahead of a greatly market moving decision had all the "appearance" of massive insider trading.

The second report examines the trading records of the "best" investors in the stock market, and correlates them to the information to which they have access as "insiders".

Of the 496 trades [Jimmy Filler]’s made since 2014 ... 372 of them, or 75%, have shown a profit three months later. That’s the kind of run the world’s best stockpickers dream of, the financial equivalent of making the final table of the World Series of Poker main event in consecutive years.

Filler is the most successful corporate insider in the U.S., according to TipRanks, a data company that rates executives by how good they are at timing trades. As a result of this status, every time Filler buys a share in ServisFirst or Century, 2,699 TipRanks subscribers get an alert. Some of them, assuming Filler’s past performance will continue, follow suit and buy some stock for themselves.

TipRanks uses an algorithm to sort through the torrent of SEC filings, filter out what it calls “uninformed” transactions—that is, those that don’t seem to have predictive value—and come up with a rolling list of the top 25 insiders. As well as looking at win rate, the service factors in how much, as a percentage, insiders are making per trade. Those with long track records, such as Filler, also score better. “Someone might pick heads five times in a row, but to do it 20 times or 50 times is really hard,” Gruenbaum says.

Even more interesting is how some of our leading politicians are getting rich through stock market trades.  If anyone has inside information about how legislative developments are going to affect companies, it's them.  The Atlantic points out:

Congress is perpetually rife with conflicts of interest, with dozens and dozens of stock trades every year raising the specter of public corruption. It also means that scandals emanate from the country’s legislative body again and again and again, year after year: Former Representative Tom Price bet on health-industry companies; former Representative Chris Collins told friends and family to dump biopharmaceutical shares, which led to his pleading guilty on insider-trading charges. (In that case, he had nonpublic information from sitting on a corporate board while in office.)

What is more, there is clear evidence that members of Congress profit from their position through equity trading—a problem that was more acute before the passage of the 2012 STOCK Act, which tightened insider-transaction rules for public officials. Several studies have shown that politicians’ portfolios consistently outperform the market. This should be an enormous, high-flying red flag. One analysis of 61,998 stock trades made from 2004 to 2010, for instance, showed that politicians outperformed the market by 20 percent.

The Speaker of the House, Nancy Pelosi, appears to be the most egregious offender in that chamber.  A Twitter account called "Nancy Pelosi Portfolio Tracker" follows her and her husband's stock market trades, and notes some very interesting comparisons.  Click each graphic to go to the original tweet. 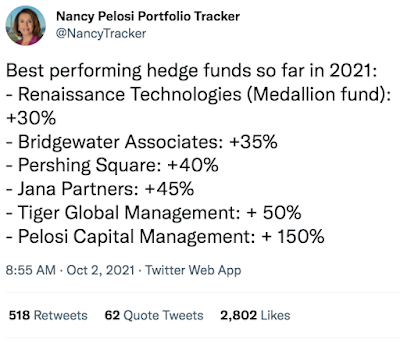 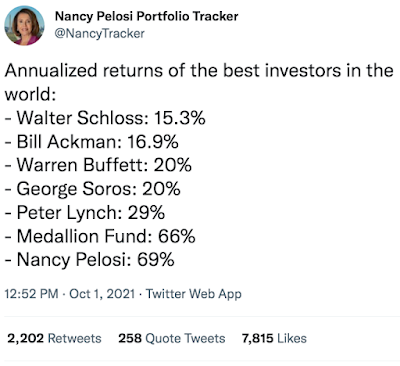 (That's why I think small investors who don't have the time or resources to do their own research in depth should steer clear of the stock market.  We don't have anything like as much information as big investors, and they basically use their inside information to strip us bare.)

I have NO trust in Democrats.

@Sam L.: Republicans are no better in this respect.

Republicans are more susceptible to being shamed when caught, and resigning.

Insider trading is one of their 'perks'... yeah, right.

There are those insiders who are too big to fail as observed in the Gamestop short fiasco where regulators stepped in to save the hedge funds when Reddit and 4 Chan investors pumped the stock to heights that would have cost them millions to cover the short.

Most of the folks that very knowledgeably do the insider trading are probably sociopaths and don't care if what they are doing is criminal. They just hope they get away with it and not be punished. I would guess that if you are considered an Elite you will not be punished if you do get caught.