State of the author as Christmas draws near

I'm grateful to you, dear readers, for the encouragement many have provided over the past couple of years as I dealt with the fallout from a heart attack and two bouts with COVID-19.  They disrupted my writing very severely, but I've been on the mend and working hard.  As a result, no less than seven books are in the pipeline for the next year or so.  I've also, in recent months, been active in helping Miss D. edit, format and publish her latest two novels, "Blood, Oil and Love" and "A Perfect Day, With Explosions".  Both have been well received.

You may wonder how on earth I could write so many books, so quickly.  The answer is simple - they haven't been written quickly, but in spurts.  I found the additional medication I was taking really messed with my writing creativity, so that I couldn't focus on a project for long before I had to take a break and get my mind on other things.  As a result, I started books in a number of different genres - a Western, a Viking fantasy, space opera, military science fiction, and so on.  Depending on my mood and ability on any given day, I'd pick up one of them and write a few pages, then set it aside.  If my interest on a different day was piqued by something else, I'd pick another book and do the same.  I've thus ended up with several books that are more than half completed, and others that are coming along.  Now that I'm off the additional medications and able to focus properly on my writing once more, I'm working on completing them and publishing them.

I'll need your help in making a success of these books.  If a writer is out of the public eye for too long, he loses his "visibility" in the market.  Thanks to illness and related factors, that's where I am right now.  I'm going to have to re-establish market visibility - another reason for publishing several books in quick succession, because readers who liked one may be motivated to buy more and give them a try.  At any rate, that's what I hope will happen.  I'll ask your help in leaving honest reviews of my books, and mentioning them on your social media pages, etc. as they come out, so as to enhance their visibility.  If people don't know they're there, they won't buy them!  (Of course, if you don't like my writing, don't bother to mention them - that goes without saying.)

At any rate, the next (fifth) volume in my Ames Archives Western series, titled "Silver In The Stones", is well on the way to completion.  The cover is in preparation, based on this Frederic Remington drawing of a prospector at work.  (The original's in black-and-white;  this rendition is colorized.) 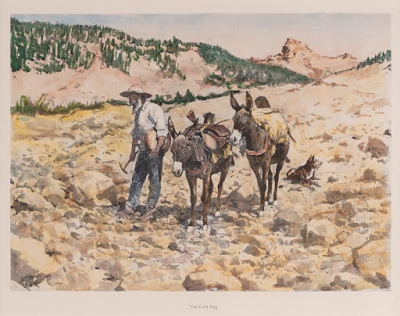 There are only a few thousand more words to be written.  I hope to publish it during the second half of November.

Also coming, although not necessarily in this order, are:

That's what's currently on the list, plus a couple of short stories for forthcoming compilations.  Seven books, no less, all currently in preparation.  If I appear short of breath sometimes, that's why!

Anyway, I'm off to write some more of the latest Ames chronicle.  I hope you'll like it when it's published next month (God willing).

Labels: Bleg, Books, Business and Commerce, Me me me, Thank You, Writing
Email ThisBlogThis!Share to TwitterShare to FacebookShare to Pinterest

Thanks Peter, I was wondering why you have not written a new book, while I buy the latest Miss D book.

I've read all your books, and buy them as soon as they are announced.

Looking forward to more, and I'll post things where I am, to be sure.

Sounds good!
Glad to hear you are doing better.
You all be safe and God bless.

Still been unable to find hard copy versions of the 3rd and 4th Ames books. Its a shame because I really liked the first two, even got some extra of them to give as presents.

I find your books so well written, with a great storyline, that I don't think you will have any problem selling any new books you write!

@JoshO: 3rd and 4th print editions are ready to go - just waiting on cover art. As soon as my designer gets that back to me, they'll be published. 5th one should be published in e-book and paper at the same time. Thanks for being patient!

The naval fiction books look very promising. I hope you could do something like Bernard Cromwell did with his Starbuck Chronicles.

I’m glad you are feeling well enough to write!

I'm just glad you are alive and well enough to talk about writing, any new books will be icing on the cake.