That's the sub-heading of an article at Wolf Street about the US trade balance.  This graphic says it all (clickit to biggit). 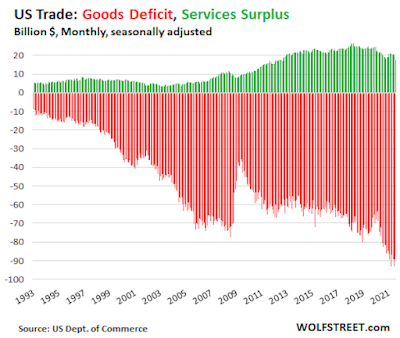 Back when offshoring production by Corporate America to cheap countries was hailed as good for the overall economy, rather than just good for Corporate America, any fears about potentially exploding trade deficits were papered over with visions of the new American Dream: America was great at producing and selling high-value services – the financialization of everything, movies, software, business services, IT services, etc. Exports of these high-value services would make up for the imports of cheap goods. And trade would balance out.

Today, we got another dose of just how spectacularly this strategy has failed. The overall trade deficit in goods and services hit a new all-time worst in August of $73 billion (seasonally adjusted), according to the Commerce Department today.

So . . . not only are our dollars worth less and less, almost by the day, as inflation and currency devaluation take their toll;  but we're sending more and more of them overseas to pay for goods that we can't bring in because our supply pipeline is clogged almost solid.  What's more, because our dollars are worth less and less, our overseas suppliers want more and more of them to pay for the same quantity of goods, making our balance of payments even worse.

Until now, this has been sustained by the dollar's status as the world's primary reserve currency.  When (not if) that changes (and both China and Russia are doing their very best to make that happen in the short to medium term), we'll find that our suppliers are no longer willing to go along with this sort of jiggery-pokery . . . and we'll be neck-deep in the dwang.  As the Mises Institute pointed out in 2015:

Today we are seeing the beginnings of a change. The Fed has been inflating the dollar massively, reducing its purchasing power and creating an opportunity for the world’s great trading nations to use other, better monies. This is important, because a loss of demand for holding the US dollar as a reserve currency would mean that trillions of dollars held overseas could flow back into the US, causing either inflation, recession, or both. For example, the US dollar global share of central bank holdings currently is 62 percent, mostly in the form of US Treasury debt. (Central banks hold interest-bearing Treasury debt rather than the dollars themselves.) Foreign holdings of US debt is currently $6.154 trillion. Compare this to the US monetary base of $3.839 trillion.

Should foreign demand to hold US dollar denominated assets diminish, the Treasury could fund their redemption in only three ways. One, the US could increase taxes in order to redeem its foreign held debt. Two, it could raise interest rates to refinance its foreign held debt. Or, three, it could simply print money. Of course, it could use all three to varying degrees. If the US refused to raise taxes or increase the interest rate and relied upon money printing (the most likely scenario, barring a complete repudiation of Keynesian doctrine and an embrace of Austrian economics), the monetary base would rise by the amount of the redemptions. For example, should demand to hold US dollar denominated assets fall by 50 percent ($3.077 trillion) the US monetary base would increase by 75 percent, which undoubtedly would lead to very high price inflation and dramatically hurt us here at home. Our standard of living is at stake here.

So we see that it is in the interest of many that the dollar remain in high demand around the world as a unit of trade settlement. It is necessary in order to prevent price inflation and to prevent American business from being saddled with increased costs that would come from being forced to settle their import/export accounts in a currency other than the dollar.

Because of this money-printing philosophy, the dollar is very susceptible to losing its vaunted reserve currency position to the first major trading country that stops inflating its currency. There is evidence that China understands what is at stake; it has increased its gold holdings and has instituted controls to prevent gold from leaving China. Should the world’s second largest economy and one of the world’s greatest trading nations tie its currency to gold, demand for the yuan would increase and demand for the dollar would decrease overnight.

China has, of course, been massively increasing its gold reserves over the past several years - perhaps the last several decades, because it doesn't talk about it much.  Russia has been doing the same thing.  Neither nation has been doing so because they like the bright and shiny metal for its looks.  No, they reckon the US dollar is going to continue its decline, and they see no reason why the renmimbi and the rouble, backed by the "hard asset" of gold, should not take its place as primary reserve currencies.  They're laying the foundations to do precisely that.  Sooner or later (my bet's on sooner, thanks to the Fed's catastrophic unrestrained money-printing), they'll succeed.  When they do . . . our balance of payments is going to get a whole lot worse.

Look at that chart again, and imagine the whole thing in red ink - and a lot more of it.

It is assumed that the US sold off, in the early 70's, most all of the Gold stored at Ft Knox. The assumption is that since no one in Congress has been allowed to see the contents there, that there is nothing TO see.
The thinking is that Nixon sold it off to pay for the Vietnam war expenses, after dropping our Gold Standard for the dollar. I've never seen any further speculation on the subject. Supposedly, the gold in the NYC depository still exists, however, since the embarrassing discovery a few years back that the bank had sold off the gold we were storing for the Germans since '45, that even that is questionable.

So if we are buying all that stuff, you could say that is the cause of hundreds of ships backed up at ports. If that is so why are store shelves full of empty spots and Costco putting limits on every day stuff. Also why are high tech things like computer chips made in Asia and why are they short in supply since they are small and light enough to air freight so the car companies could deliver their back log of vehicles? It just doesn’t add up!

One of the questions I have is what will replace the US$ as a global reserve currency?

I mean it isn't going to be the Rouble and I doubt it will be the Yuan. The Rouble has not been notably stable and is basically a petrocurrency. The Yuan is clearly no safer than the dollar and almost certainly worse in that there's no transparency at all as to the central bank actions

It's unlikely to be the Euro because everyone can see the imbalance between the north and south in the Eurozone is unsustainable.

No one is going to actually trust Russian or Chinese claims of gold without the kind of inspection regime that the Iranians object to regarding nukes.

Mind you, as noted above, no one has audited US gold reserves either. And for that matter all those people buying gold or silver and not taking physical delivery of it might wonder why the warehouses that allegedly hold their bullion don't seem keen on having audits either