A mind-dump from Michael Yon: "Ukraine is a diversion"

In a stream-of-consciousness post from Michael Yon, he puts together what's going on in Ukraine and Taiwan, the invasion of the USA via our southern border, and the COVID-19 brouhaha, and comes up with some disturbing conclusions.  I'm going to take the liberty of copying most of his post here, and highly recommend that you click over to his place to read the rest.  While you're there, consider subscribing to his feed, and supporting him, as I already am.  There are precious few trustworthy independent reporters doing this sort of work.

It's not difficult to imagine a future where the people in charge of our nuclear arsenal are from places like Somalia. It's bad enough that the monkeys today want to fight Russia deep in Asia -- on Russia's doorstep for a country, that does not care about America and has real nazi lovers in uniform.

Russian can easily counter by putting incredible weapons and other capabilities in Cuba, Venezuela, Central America, and they are experts at many types of information and other sorts of warfare. Russians are serious hombres.

This information war from many sources has already brought brain cancer to America.

Imagine a world in which someone like Lady Gaga or AOC is President. Bradley Manning is Secretary of Defense and some chick with purple hair and a nose ring is Commander of Ranger Regiment.

We've got the military equivalent of Fauci as Chairman of the Joint Chiefs. But Fauci is 10x smarter and more evil. General Mark Milley and SecDef Austin are the slow kids in class, but they are trained monkeys.

Evil is the right word. I am careful with my words. And those who squirmed when Lara Logan compared Fauci to Mengele don't know much about Fauci, or Mengele.

Truth is often far more dangerous than lies. Lara got fired but ultimately that is a great thing. Lara is more dangerous as a Lone Ranger from MSM shackles. She's got a lot of friends.

In any fair world, Fauci would be on trial for at least thousands of murders, if not millions.

The more I learn about Fauci's history, the more I suspect he may be doing something even more sinister than just trading lives for money/power. Fauci appears to be committing subtle-genocide since at least his HIV/AIDs days.

I realize...this may sound like moon-howling, but long-time readers know that anytime I talk like this, there turns out to be something in the dark that we eventually find, and it's always something big.

Is genocide a Fauci-aim? I am not a mindreader. Fauci walks like a duck. The duck behaves as a psychopath. We have a psychopath Duck on our hands.

Fauci's galaxy of fraudsters is accruing massive wealth and power while literally committing mass murder. That much is clear and true. What is unknown to me is whether the mass murder is intentional genocide, or just coincidental genocide.

Because, we know, correlation is not causation. (Obligatory statement -- check).

We do not know Fauci's intent. But if his intent is to create subtle genocide while creating a Pharma-Reich, he's doing a great job other than that finally millions of people see it. And that's a setback for Herr Fauci.

Take AIDS, for instance. AZT has been pumped into HIV-positive people who were healthy. AZT itself Causes AIDS. Patient soon dies possibly from the AZT-induced AIDS, all while safer, cheaper medications were blocked by FDA.

So basically, they create the AIDs with AZT, blame it on HIV, and continue cow-milking operations. The United States has spent more than 600 billion dollars on AIDs-craze.

The AZT murder-scam sounds an awful lot like the poison 'vaccines' and Remdesivir.

People test positive for the virus and are admitted to hospital. Pumped with Remdesivir, denied HCQ/ivermectin, etc. Put on vent. They suffer, die, and are cashed in as pandemic victims when in reality they may well be victims of the Fauci-madness that includes Remdesivir and fake vaccines that appear to be causing many problems such as miscarriage. All this while team-Fauci kills off the 'control group' that does not really exist.

All this works in part due to the incredibly efficacious information campaigns. Fauci is infinitely brighter at information war than he is at medicine. If we could hire Fauci to fight China, he'd probably convince Xi to blow up Three Gorges Dam to stop a pandemic.

Some American hospitals have become death camps. You should see my inbox or sit in some of many perpetual meetings. I would not step foot into a hospital for a "covid" one-way-trip.

Ukraine is a diversion. Suck our Army out there and kill off a bunch of Soldiers while we are being invaded from the south. Recently, a jihadist flew in and took Jews hostage in a Texas Synagogue and The Beast is still talking about white-terror. I recently visited the Pulse nightclub in Orlando where a jihadist burst into the gay nightclub and capped about a hundred people, killing almost 50.

Fauci and jihadists are hell on gay people. There is a memorial at the Pulse nightclub. Go see it. Notice there is little evidence of truth about what really happened. Straight up mass murder. Fauci and jihadists have that in common.

Taiwan is naked and alone but does not seem to realize it.

Taiwan does not even have a draft. How many Taiwanese can fire a rifle?

Japan must toss out Article 9 and start talking about compulsory military service. This is a matter of life and death.

Our borders are wide open. It's getting worse. They are cutting trails in Darien Gap to make that invasion route simpler.

Stock
Up
On
Food

As for President Biden's threat to intervene militarily in Ukraine (which he's apparently withdrawn or toned down now), I think this meme currently circulating on social media says it all. 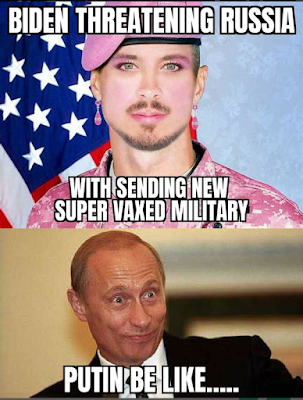 No s***, Sherlock!  I daresay President Xi's reaction to US threats over Taiwan is rather similar, if not more so.  Anything the hapless, feckless Biden administration tries to do in the geopolitical sphere is likely to elicit this reaction right now . . .

It's all a diversion.

agree all but one point. if you look really closely at the south china sea operational area, it appears that someone different is in charge there. biden says one thing but actual movement and actions say something very different. rumor was general kelly's brother was commanding but i found him to be assigned a rear staff position last i looked. the marines in that theatre seem to operating on a dif level as well and seem to be ignoring joe's directives to stand down. i also think taiwan won't be alone nor unable to resist china. sure china could destroy them but they need them intact. i know there are not only official military preparations but also some private megabucks entity is pouring supplies into the island. no idea who that is.

question for Mr. Yon??. I read the news regarding Fauci's supposed millions in financial statements. It seems like too little. He is the kingpin here,, hanging out with multibillionaires,, he has to have other funds hidden somewhere. He is not doing all this for a measly 10 million or so. Can someone look into his hidden accounts?

We let the last election stand. We should have been in the streets.

Now we get to reap the whirlwind.

"PanFaWar: Pandemic, Famine, War," have been known for ages as three of the Four Horsemen of the Apocalypse. The fourth, Death/Thanatos is their steadfast companion. Should anyone no longer recognize that the End of Days is imminent, it is only because of abject denial of reality.

I did ask myself this morning what's in General Milli Vanilli's (or whatever is name is) back channel communications with the Russian and Chinese military right now. He opened the channel last year. I can't believe he's changed his ways.

@checkers Could be that Dr. Faustus, er, Fauci has a hundred million stashed away in a Cayman Islands account. Or perphaps Dr. Strangelove, er, Fauci gets his kicks from seeing his gain-of-function research, and his subsequent cover-up, and his suppression of early treatments, and his pushing of the poison death shots, surpass his wildest expectations. Who knows? "Nowt as strange as folk." And Dr. Mengele, er Fauci sure is a strange one.