"How the world's deepest shipwreck was found"

That's the title of a fascinating article at the BBC about the search for the wreck of USS Johnston, a Fletcher class destroyer sunk during the Battle off Samar in 1944.  For her actions during that battle, her commanding officer, Commander Ernest E. Evans, was posthumously awarded the Medal of Honor and the ship was awarded the Presidential Unit Citation, both being the highest awards in their respective classes conferred by the United States.

The search for USS Johnston was aided by recently developed technology, but still presented a monumental challenge.  It lay more than 21,000 feet beneath the ocean surface, which makes it the deepest shipwreck ever surveyed.  Here's a photograph from the article, showing one of the ship's anti-aircraft gun mounts.  Click the image for a larger view. 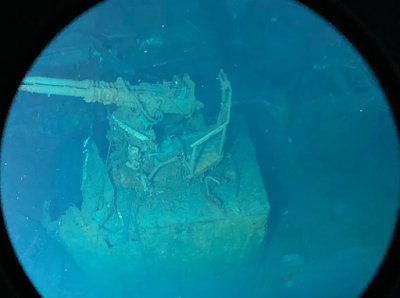 The article is long and filled with detail, which I found very interesting.  Here's a short excerpt to illustrate how much information it provides.

Most of the world's shipwrecks are found in shallow coastal waters. Ships follow trade routes to ports, and coastal waters offer the chance of sanctuary if the weather turns nasty. So this is where most ships founder and sink. But the waters Johnston sank in are very different. Rather than a smooth decline, they instead drop steeply to great depths.

Samar Island sits on the edge of a vast marine canyon known as the Philippine Trench, which runs for some 820 miles (1,320km) along the Philippines and Indonesian coastline. It skirts around the eastern side of Samar Island, on the seaward side of Leyte Gulf. It is very, very deep. If you were to drop Mt Everest at the deepest point of the Philippine Trench, the Galathea Depth, its summit would still be more than a mile (1.6km) underwater.

No-one knows quite how long it took for USS Johnston to reach the ocean floor. She sank through layer after layer of the Philippine Sea, distinct stages which grow ever darker, colder and inhospitable. Past 100m (328ft) sunlight would have begun to fade. Past 200m (656ft) Johnston would have entered the twilight zone, a vast layer nearly a kilometre deep which marks the end of the effect of the Sun's light on the ocean. The temperature would have plummeted the further she sank. At 1,000m (3,280ft) Johnston's ruptured hull would have would have plunged through waters only a few degrees above freezing into what oceanographers call the Bathyal Zone, also known as the midnight zone.

No plants or phytoplankton grow here as the Sun's light cannot penetrate this far down. The water is freezing cold and this gloomy zone is sparsely inhabited by life. The animals that do live here have evolved to do so in cold and relentless dark. Eyes are useless, and so are fast-twitch muscle fibres, which elsewhere prey might rely upon to escape predators. But down here they consume too much energy to be worth it. The fish that live here look little like the ones that swim near the surface. They are soft and slippery to the touch. Some are blind and others almost transparent. What use are camouflaging scales when your predators – nightmarish creatures that hang suspended in the dark – have no eyes?

The average depth of the world's oceans is 3,688m (12,100ft), more than two miles deep. It is in waters as deep as this that the RMS Titanic sank on its ill-fated maiden voyage in 1912. But Johnston's death dive went far, far beyond this.

Past 4,000m (13,123ft) is the Abyssal Zone, with water temperatures hovering just above freezing and dissolved oxygen only about three-quarters that at the ocean surface. The pressure is so intense that most creatures cannot live here. Those that do differ from their shallow-water cousins in almost every way – fish have antifreeze in their blood to keep it flowing in the intense cold, while their cells contain special proteins that help them resist the intense water pressure that would otherwise crush them. But the ocean goes deeper still.

Drop further and there is the Hadal Zone, another layer found below 6,000m (19,685ft) from the surface. The Hadal Zone is found in the deepest ocean trenches, mostly in the Pacific Ocean, where giant tectonic plates push together far beneath the waves. Danish oceanographer Anton Frederik Bruun coined the term in 1950s, when technology had advanced enough for the first cautious exploration of these submarine chasms. The term hadal came from Hades, the Ancient Greek god of the underworld. It is in complete darkness, temperatures hover just about freezing, and the pressure is around 1,000 times that at sea level.

Somewhere within this vast underwater trench, the USS Johnston finally came to rest. But the exact location was very difficult to predict. The ocean's surface is by no means featureless, but its anonymity can make finding the exact locations of naval battles a challenging task. There are no monuments, and no topographical features which aid identification. Underneath the waves, currents and tidal patterns can pull wrecks far from the spot where they sank.

It would be 75 years before human beings saw Johnston again.

There's more at the link.  Fascinating reading for military history buffs and those interested in underwater exploration.

Very cool story. Thanks for finding it.

Interestingly I recently finished The Last Stand of the Tin Can Sailors: The Extraordinary World War II Story of the U.S. Navy's Finest Hour, by James Hornfischer, an amazing account of the battle that sank her. Read it and you will see how both skillful and brave the U.S. sailors were.

If I ever won stupid amounts of lottery money, I would sponsor an expedition to place two or three full-sized human skeletons of space-age polymer dressed in Navy working dungarees and Tommy helmets at their posts on that 20mm AA mount. For all time.

Aesop - I concur with your sentiment, but that mount is the twin 40 mm located between Mounts 53 and 54.

I also recommend that book. And PT Deuterman has a novel featuring the action (book is my Colorado house so I do not recall the title).

I was fortunate that I grew up with stories of this sort. My father was one of the original crew of the submarine ALVIN (the one that found the Titanic in the 80's), and was there for the search for the missing nukes that made the Alvin famous.

The advent of side-scan sonar and advances in search technology should have made wreck searches more popular, but it seems the age of exploration really isn't coming back. It may be that the decline in National Geographic has just led to decreased press about it, I suppose.