State of the author at the end of January 2022

It's been a very, very busy month.

My latest Western novel, "Wood, Iron, and Blood" (first in a new series titled "The Annals of Ash") was published on January 11th. 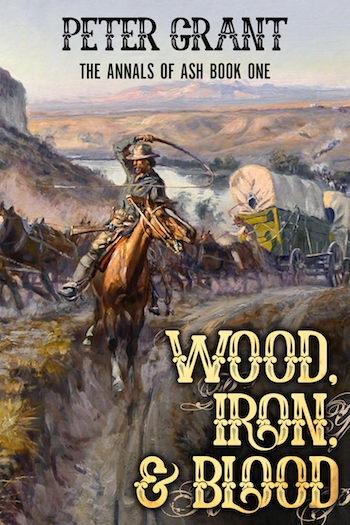 As of the time of writing on January 31st, it's attracted 114 reviews and ratings, almost all very positive, and is selling steadily.  Needless to say, I'm very grateful for that, and for all your support.  It's still ranked as the #1 new release in Amazon's category "Classic Action & Adventure" after three weeks, which is very pleasing.

One of the infuriating things, though, is that negative ratings are so often left with no review to say what the reader found to be bad about the book.  I actually take the time to read my reviews, so that I can improve future books where necessary.  To get a one-star review with no comment at all means that I can't improve whatever the reader disliked.  Then there are the reviews that have nothing to do with the book's content.  For example, last week the new Western received this one-star review:

The third time it skipped pages, no idea how many, I gave up on this book - not bad writing and it was proofread. A rarity in these books.

So the reader had no problem with the book itself, but he still gave it a one-star review, dragging down its ratings because of a technical problem that had nothing to do with its content.  That's obnoxious, to say the least, but there's nothing I can do about it except to shake my head in disbelief.  It's not the first time that's happened to me.

Anyway, on to my current activities.  As I mentioned recently, the sixth volume of the Maxwell Saga, "Venom Strike", was running into problems.  Too much of it was wandering around, getting nowhere, losing focus.  I therefore decided that surgery was required, and chopped out something like 22,000 words from the manuscript.  The remaining "core" of 30,000-odd words was sound and in good shape, and I'm using that as a foundation on which to build a new approach.

As part of that re-focusing, I spent a couple of weeks re-editing and re-formatting the first five volumes of the Maxwell Saga.  It was my first series, and some features (e.g. excessive use of the exclamation mark, some word repetition, etc.) could have been better done.  With the benefit of greater experience and hindsight, I've tried to clean those up - not changing the story at all, just making the books read more smoothly and easily.  I'll be reissuing them all during February, with new covers as well.  Here, for example, is the new cover for "Take The Star Road": 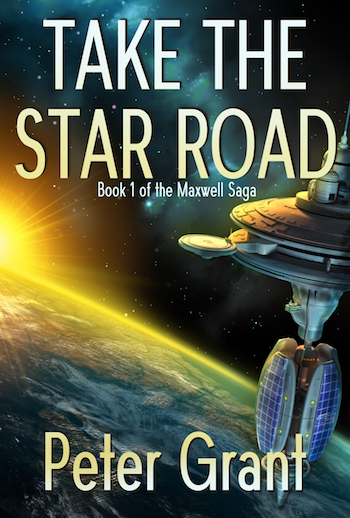 Friend, artist and author Cedar Sanderson is designing the covers.  You can read about her creative process and how she develops them in this article.  It's been a lot of fun collaborating with her on the designs.

Doing all that editing (over 500,000 words of it!) on the Maxwell series helped to re-focus my mind on what's needed in its sixth book.  At my wife's suggestion, I'm trying something different:  narrating it from the perspective of a protagonist who isn't Steve Maxwell, but who travels with him and observes how he handles various situations.  It'll bring in a few familiar characters from the past, including the attractive and intriguing reporter whom we met in "Stoke The Flames Higher".  I hope you'll enjoy it.

I hope to have "Venom Strike" ready for publication during March.  Thereafter I have lots more projects on the back burner.  The first in a naval trilogy set during the Civil War era will hopefully be next (I published a short story based on its opening chapter in the recent anthology, "Tales Around The Supper Table Vol. 2");  then, the third and final novel in the Laredo War trilogy (also giving them new covers).  After that will be the next Ames Archives Western novel, then I want to give some attention to a Viking-era fantasy novel and a brand-new science fiction story.  Most of the books I've mentioned are already in progress, some with several tens of thousands of words written, so I hope to be able to produce them in fairly rapid succession.

So, that's the state of this author as of today.  I'll do my best to keep you entertained!

Labels: Books, Business and Commerce, Idle chatter, Me me me, Thank You, Writing
Email ThisBlogThis!Share to TwitterShare to FacebookShare to Pinterest

I just finished Wood, Iron & Blood and greatly enjoyed it. I'll leave a review on Amazon in due course.

Glad to hear you're making progress. I am waiting with anticipation both for more about Mr. Maxwell and for the Laredo War series...though that last looks to me to be a real puzzle. Best wishes and thanks for the update!

First loved your book and left review. Second on reviews I've notice some are becoming more wokeyness. Have you thought your political views might have an effect. People are crazy and its getting worse. Once saw a one star review because a bomb sniffing dog died when it fond the bomb. Said stop reading. Seemed she had no problem with the dozen of people killed. Plus there were many other part with death before??? The dog maybe had few dozen pages about him. Was a minor character. Last any plane on adding to your mercenaries trilogy, or you last fantasy book. The Trilogy or your western are my favorite.

@Unknown: You may be right about the "wokeyness".

As for the "Cochrane's Company" trilogy: yes, I had plans for a follow-up trilogy set several years later, but oddly enough that trilogy has not sold very well. There seems to be much greater demand for more Maxwell, Ames, and of course the new Western series. I have the outline for "Cochrane 2" on the back burner, but it'll have to wait until I can spare attention from the series that are making money for me.

As for the last fantasy book, "Taghri's Prize", yes, I have a couple more planned as follow-on volumes: but the same principle applies. My fantasy books haven't sold as well as my bread-and-butter series, and I rely on my writing to put food on the table. Therefore, I have to write what my readers want most.

There's also the factor of time, of course. I can only write so fast! :-)

Peter, loved this first book in a new Western series.
As author you cannot do anything about that A**hat reviewer and his one star rating for something absolutely not in your control.
But I and everyone listed as a confirmed purchase reviewer certainly can. Just a mouse click on he "abuse" button is an additional vote to have such garbage removed.
Does that reviewer not have the slightest clue how this all works for Ghod's sake?

I have your first 3 maxwell on nook, Then I went ahead an recently got them on kindle, for some reason I thought they were re edited. Well, if you are doing a major rewrite, I guess I’m on the hook for them. Your work is always appreciated.

@Tsgt Joe: No, you can get the new editions when they're out. Simply go to your Amazon "content and devices" settings, and update the books in question. Give it a couple of weeks after the re-publication, and your copies should reflect the changes.

I just read your Wood, Iron, and Blood and thought it was great. I've been reading your e-books for years. Thanks for the heads-up on what I should look out for next.

I do like that the antagonists have their own motivations and are not just foils. For the Westerns, the terrain descriptions also add color, although I'd like more of the unique wildlife that is in the area, even the lowly pika (rock rabbit/mountain coney).

Oh, and I not only got the 'skip pages' issue on the web reader, but also it would occasionally skip/miss paragraphs when turning a page (maybe the desktop reader app was so excited that it was turning the pages as fast as it could). The solution for me, oddly enough, was to run it full screen/maximized on the desktop.