The sheer, mind-boggling stupidity is overwhelming 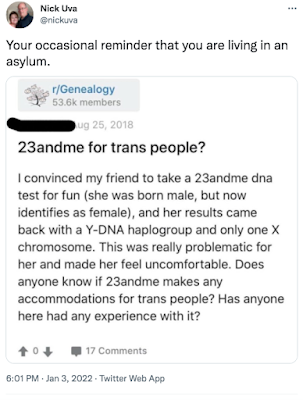 If you want to dial up your schadenfreude, click over to the thread and read the replies.  Some are side-splittingly funny.

What scrolls my nurd is that the Reddit poster is clearly absolutely serious.  Perhaps he/she/it doesn't even understand that one's chromosomes are fixed, unalterable - in which case his/her/its education was abominably neglectful of biological facts.  Even worse, he/she/it is openly asking whether a DNA analysis service is willing to falsify its results for the sake of political correctness.  Why would anyone in their right minds want falsified results that might lead to inappropriate medical treatment for a serious illness?  Some are sex-dependent.  You can't get (or be treated for) prostate cancer if you don't have a prostate, or cervical cancer if you don't have a cervix.  What happens when a test on someone who not only identifies as female, but presents a genetic report appearing to confirm that it's female, produces results suggestive of prostate cancer?  One has visions of medical technicians' minds exploding!

You can surgical change anyone. You cannot change the sex though. Kills me the current jeopardy champion is Amy S. Amy looks like an Andy but refers to her other as a her.

Shows the inner programming. Amy is not gay, so she is attracted to her opposite sex.

Not as insane as the fact that 23andMe has caved.
https://blog.23andme.com/23andme-and-you/making-23andme-more-inclusive-for-all-genders/

You can change your own labels in the software, that doesn't change the science behind the scenes.

23andMe will continue to use a customer’s birth sex as a part of our laboratory quality control steps. This is because if someone’s self-reported sex doesn’t match what we’ve determined from our analysis of their DNA, we want to make sure there wasn’t an error in processing. We will also continue to use a customer’s birth sex to help us deliver or interpret results for certain health, wellness, and traits topics.

I used to belong to a fitness forum where someone once asked how his/her/its gender fluidity would impact training. Men and women respond differently to strength training mostly due to the presence or absence of testosterone. The individual wanted to know if their training should be changed depending on whether they (darn this is exhausting) woke up male or female that morning.

To which we gently replied that how the amount of testosterone you're carrying (and thus your response to training) has f-all to do with whether you felt like wearing a dress or pants that morning. It was several years ago, today we'd likely be banned for such things.

That's terrible. How will those that identify as a rutabaga determine their genetic history?

The bigger question is how this affects Elizabeth Warren.

In health care, you can walk around with all the non-problematic delusions you want. We don't care, as long as you're not a danger to yourself, others, or gravely disabled. Anything not those three is harmless-crazy.

But it's neither ethical, nor in my job description, to cater to your delusions. Yes, I'll call you a potato if you want. But I'm not slathering you in butter just to enable your psychosis. I'm going to be clinically precise, down to referring to a "he" as a "he", regardless of what you're wearing, whether your hot dog is chopped or not, or what you want your pronouns to be.

If you spontaneously grow a functioning uterus and ovaries, we can talk about it.

Until then, no deal.

Accepting lies is how we, as a society, got to where we are now.
Modern Leftism is defined as the absolute denial of the existence of reality.

I like the idea - implicit in the request for accommodations -that transgenderism is a disability.