So much for the security of rail freight...

If you've wondered why some of your parcels and packages, traveling by rail for part of their journey, haven't arrived . . . wonder no longer.  John Schreiber has posted a thread on Twitter, complete with videos and images, that uncovers a huge theft problem as trains pass through certain areas.  I'd like to know how many similar areas exist in other parts of the country.

For convenience, here's part of Mr. Schreiber's thread from Threadreader.

Keep hearing of train burglaries in LA on the scanner so went to #LincolnHeights to see it all. And… there’s looted packages as far as the eye can see. Amazon packages, @UPS boxes, unused Covid tests, fishing lures, epi pens. Cargo containers left busted open on trains. @CBSLA

I’m told by law enforcement these @UPS bags are especially sought after by thieves opening cargo containers… they are often full of boxes with merchandise bound for residential addresses. More valuable than say, a cargo container full of low value bulky items like toilet paper. 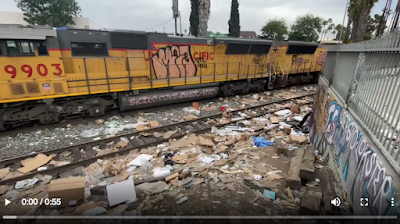 This opened package from @REI destined for Bainbridge Island, WA was taken off a train. Typing in the @UPS tracking # and it obviously lists it as “delayed.” We found lots of opened packages bound for the Northwest along this section of tracks.

As you can see, trains frequently slow or stop in this area as they get worked into the @UnionPacific Intermodal facility near Downtown LA. The thieves use this opportunity to break open containers and take what’s inside. I’d say every 4th or 5th rail car had opened containers.

Missing a package? Shipment delayed? Maybe your package is among the thousands we found discarded along the tracks. This is but one area thieves have targeted trains. We were told this area was just cleaned up 30 days ago so what you see is all within the last month. @CBSLA

There's more at the link, including several videos and images.  It looks like Mr. Schreiber took a small drone with him to photograph the resulting mess from the air.

I understand law enforcement on railroad property is the responsibility of the railroad rather than local police.  If so, why aren't they doing more to stop this?  I'm sure thousands of customers whose packages have gone missing would love to know . . .

Because non one at the Railroad can be bothered to care.
And, anyone who might care, is shouted down by the "go-along to get-along" majority
Nothing will change.

Rail freight theft has been a problem since rail started... And you won't be surprised to notice that it is worst in big liberal cities. There are reasons for the saying "the wrong side of the tracks".
I'm surprised to see packages on the train; given how UPS and FedEx work, I'd have expected them to use their own or contracted trucks for most packages.

Circa 2008, Pirelli Tires hired me to stop the thefts of their tires from railway sidings in Detroit. Essentially a group of inner-city youth were supplementing their narcotics income by systematically stealing tires and then selling them at a local swap meet. I'm not going to launch into a polemic, but I stopped that practice. I also stopped the local Russian Mafia from stealing their tires from the two warehouses they had in Detroit. All you need is somebody with the skills to make this happen. (One riot, one Ranger)

Why aren't they doing more? Well, a couple of reasons. One you have a train potentially a mile long hanging out on a siding. In some states the RR police can only patrol its ROW. Makes catching people hard.
Secondly, even if they do have powers of arrest, they have the same problem as the PD in the city that has declared minor theft to not be a problem.
Third, manpower, manpower, manpower. They've run lean, probably too lean but in fairness they probably didn't expect California's interesting approach to shoplifters any more than CVS or Walmart did.
Fourth a lot of containers aren't actually the train's property, so ensuring that they are more securely locked requires alot of talking with other companies.
Finally, they are US police officers, which means playing by the rules. They can't exactly shoot on sight anymore, more is the pity.

I believe it to be a numbers game.
How many multiple thousands upon thousands packages made it through.
UP ain't worried about a bit of spillage.

We have lots of trains stopped near where I live and they sit for hours at a time but you won't see them getting looted, a brief glance at the demographics of my area explains why the railcars are unmolested no matter how long they sit.

These losses are just a cost of business to them and the additional cost just gets rolled back into the price we pay for these products. Yet another way that regular Americans get shafted financially to subsidize having a diverse, multiracial Utopia.

Yeah, why ISN'T law enforcement doing something about all these apparently well-organized and well-trained coup d'etat mobs who seem to have unbridled carte blanche to help themselves to whatever they want, whether from retail stores, front porches, mail boxes, cyberspace, or any other public or business spaces, and apparently with total impunity at that?

Often it's not so much the railroads as more who has jurisdiction over the area. Locals? Well, these are the same locals that don't investigate assaults and robberies and burglaries of their own citizens. If the rail cops do arrest them, they get tried in local jurisdictions and the same problem.

If it's the Feds, well, the feds are too busy looking for all the jackwaggons putting "I did that" stickers on gas pumps, and again, who are the railcops going to turn the criminals over to? The fed court system which is highly broken and hates anything 'low level?'

Solution. Allow the Rail Cops to treat Rail Property as Sovreign over local ordinances. In other words, start shooting the copulaters who are doing all of this. Hang their bodies along the railway. That is the only way to stop this nonsence.

As to the rail thefts, you see the same exact thing in inner cities when the whole neighborhood comes out to jack a delivery truck. There are videos of UPS, FedEx, Walmart trucks being emptied in seconds. NASCAR pit crews have nothing on these thugs.

What every poster said.

But hey, c'mon, it only took BN&SF four years to put up a paltry single fence after car thieves kept dumping stolen cars on their RoW hereabouts, and leisurely stripping them, which the RR had to have towed out every few weeks afterwards, at a cost of thousands of dollars each time.

And the RR has only been there for 140 years, so it's not like they didn't have time.

Railroads are operated by hard working Joes, but they're run by people too stupid to run airlines or even trucking companies, and with less concern for customer service than the Post Office and/or the DMV.

Along with the other good answers I'll add, as someone who actually works for the railroad pictured, several years ago the suits decided to cut expenses. One department that got a major axing was the special agents, I e. the railroad police.

Another part of the cost cutting was combining smaller trains to make bigger trains. These bigger trains cause longer delays getting out of the way of other coming and going. So you see trains stopped and waiting a lot more.

I worked for the Santa Fe Railway Company and successor BNSF Railway Company for just under forty years. Theft has always been a problem, but with the normalization of looting being established by Soros with his Secretary of State project it is bound to get much worse.

We not only had a problem with the theft of cargo. We had a recurring problem with wire thieves who would take down long sections of signal line wire to sell the copper as scrap. Drug money. This went on until we replaced the line wire with wireless signal controls, but these needed alarms because the thieves would steal the solar cells!

The commenter above who noted the importance of the demographics of the area where a train is stopped is entirely correct. Once upon a time the rail lines from the big yards in Los Angeles ran through South Los Angeles. Watts and vicinity. For fifteen miles or so, with dozens of road crossings. A stopped train on the SP line would bring out the neighborhood: "Free TV's down at the Train!!". The advent of container trains brought an improvement called the Alameda Corridor, where the SP, UP and Santa Fe combined capital and operations and put the track down in a trench with high concrete walls. Not easy to loot anymore, and it got rid of the %%^&&***!! road crossings.

Aesop, It is impossible to fence off the entire ROW. Beautiful dream, yes. Possible, no.

The UP has let go a large percentage of their police force. I don't know The exact numbers let go but it is significant. Just a few years back I would see UP cops all the time. Since the reductions a few years ago I can't remember the last time I saw a UP cop. I'm sure the people participating in these thefts are fully aware there are much fewer UP cops to patrol.