I have no hesitation in saying that if the documentary "2000 Mules" is not sufficient to prove to you, once and for all, that the 2020 Presidential election was stolen, then no proof will ever be sufficient for you.

Here's the trailer for the movie.

Dinesh d'Souza is also bringing out a book on the subject, under the same title, which will be available in August. 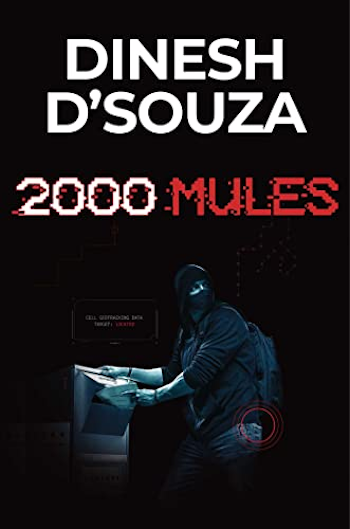 From the book's blurb:

THE FIX WAS IN

The 2020 presidential election was rife with fraud orchestrated by the Democratic Party. That’s not just an accusation; it’s now, thanks to bestselling author and investigative journalist Dinesh D’Souza, an established fact. With eyewitness testimony and the pinpoint precision and analytic sophistication of the forensic technique of geotracking, D’Souza demonstrates how an already corrupt system put in place by Democratic Party hacks and “community organizers” was taken over and supercharged by national-level operatives to produce massive voter fraud.

The key figure: the mule. A paid cut-out. A criminal deliveryman. The stooge found at the intersection where election cheating and double-dealing hit the road. The mule is the crook who physically takes a sack of ballots provided by shady NGOs and political machines—the “community activist organizations” made famous by former President Obama, for instance—and, like some nefarious Johnny Appleseed, dumps those ballots in collection boxes throughout a voting district. Do enough of this, and you have planted voter fraud across a nation.

Documentary filmmaker extraordinaire and bestselling author of America, Death of a Nation, and United States of Socialism, Dinesh D'Souza exposes powerful evidence of the colossal voting racketeering that you were told didn’t exist. Here you will find the receipts—the transcripts and confirmatory details—for the facts establishing 2020 election fraud presented in D’Souza’s major motion picture documentary, 2,000 Mules. D’Souza makes a powerful argument that 2020 was a stolen election. More important, D’Souza proves it.

Advance sales of the book have already made it a bestseller on Amazon, even though it won't be released until the end of August.  My order is one of them.

I've watched this documentary.  It's utterly convincing, to the point that I suggest the burden of proof to the contrary now lies with those who want to prove it wrong.  They must produce evidence at least as convincing and conclusive and well-documented as that which the movie provides, or their argument fails.  Vague allegations or smear tactics simply aren't enough.

Attempts from left-wing sources to debunk the movie are unconvincing, to say the least.  See for yourself:

(For another excellent debunking of the "fact checkers" trying to cast doubt on "2000 Mules", see this article at Redstate.  It's very thorough, and leaves little if any room for doubt.)

The question is, do we, as a nation, have the will, the determination, the courage, to do something about it?  As President Trump says:

The movie exposes the lies of the Democrats, RINOs, and Fake News who say it was the "most secure election in history." It was, perhaps, the least secure in history. The ballot box was stuffed, and stuffed like never before—and it's all on video. Ballots were trafficked and sold in a massive operation in each Swing State. The evidence is so damning, what will the cowards who sat and did nothing about the stolen election say now? The way our votes were taken away is a disgrace to our Nation. It must be fixed.

He's right.  Whether or not you support(ed) President Trump, in this, he's dead right.  It's a matter of national urgency.

If you haven't already seen the movie, please, please make time to do so.  It highlights issues that are fundamental to our future as a constitutional republic.  You can buy it on DVD at the movie's Web site, or watch on several streaming video services (for example, at Rumble).  It's telling that every left-wing-oriented video site on the Web that I've checked is either trashing the movie, or actively blocking it from streaming.  That includes YouTube, which goes so far as to list several sources denouncing the movie when you search on its name, but doesn't provide even the trailer to the documentary.  Bias, much?

This is a vitally important movie, one that no thinking American can afford to miss.  Please find a way to watch it, and soon.

One must remember when searching, the algorithms give different results depending on your search and click history.

Did 2 searches, both searches did list the documentary, though they differed in where they were.

You have to wonder how the idiots putting their thumbs on the scale can square the hole, that the "2000 Mules" reactions and reviews appear above the documentary.

The documentary is indeed compelling, but I wish all of these election investigators would change their tack - they would be much more successful if they did.

Nearly every single one of this group sets out to prove, a little bombastically, that the election absolutely positively simply must be reversed. There is an undercurrent of this in 2000 mules. It was front and center during the election contest, and has persevered for over a year now. It has become a way of spinning out the energy in the topic, harmlessly.

Sure, the evidence and common sense suggest the election was stolen - but the American character is to 'move on'. The investigators would have a much more effective and longer-lasting message if they were to say, 'Here is the proof that is nearly irrefutable, here are the steps to make it irrefutable, and here is what we must insist, as a Call to Action, to ensure that it Never Happens Again. And here is what you can do to help (..and so on). People like Scott Pressler quietly go on pounding the pavement in the public sector and leading by example. This is a whole lot more effective I think, especially if the millions who are outraged would channel their energy in those directions.

another called "rigged" that takes a diff route to the same compelling conclusion. get the rope.

More so than just proving, action needs to be taken against the perpetrators. If no justice will do it, then we the people need to do it.. Identify them and where they live for the teams that will do the retribution.

Agreed, a reversal would likely require a war, the dismantling of nearly the US government, and a major socital/political realignment

The powers that be (not to be confused with the disposable face people the kleptocratic "leadership" we "Elect") know they have us by the balls.

World Economic Forum folks, Even Soros is a small potato available to become disposable as needed.

We are Law abiding and THEY Write the Laws. So were the Germans that obeyed LAWFUL Orders and walked into the Trains complaining "I'll call MY Lawyer" and "I have RIGHTS". Real history folks. Not just Jews but folks that protested against the treatment of their neighbors, the Jewish Germans.

Any real action against the powers that be will first be deflected to the Disposable Face People aka the Sock Puppet etc. for public trial and disposal to SEE if that calms enough of us.

Even if they sacrifice 2000 mules in a soviet style trial and such SO WHAT?

You think the Next Election will be "Cleaner"? LOL, Really??

Meanwhile troublemakers will be rounded up quietly as they go to work, go shopping and so on. No door to door actions some "Patriots" seem to wish for.

Look how they captured the Jan 6th folks one by one well AFTER the event was over, QUIETLY. Media coverage very controlled, Look what happened to the Truckers Protest? Crickets, eh?

I PREDICT that 2000 Mules will go into 1984's Flaming Memory Hole aside from the few ALREADY Converted who bother to watch it. Joe 6 pack shall never hear that truth. At best a few "mules" will go to trial. So what? The REAL Crime Lords are laughing.

If Sacrificing a few disposable face people or Mules seems not to be useful enough then a nice Pre-programmed-controllable War or such with ever serious destructive actions here in America will be used.

After all "We are ALWAYS at war with Eastaisa". Nice way to accidently destroy traitors and criminals without much public outcry (lest THEY get so charges with aiding the Enemy).

If we actually shut off the lights some 90% of our population is dead with in a year for very REAL WORLD Reasons. Simply put we cannot support our population without the power grid and THEY KNOW THAT.

The planning and actions of our Founding Fathers was Illegal and made them Traitors to the Crown.

You might want to read again the Declaration of Independence. Men of wealth with much to lose wrote that and so declared themselves the mortal enemy of the Crown. Final quote from that before they SIGNED their Names.

“And for the support of this Declaration, with a firm reliance on the protection of divine Providence, we mutually pledge to each other our Lives, our Fortunes and our sacred Honor”

If they lost, they were doomed as well as their families.

Sacred Honor, anybody really know what is today? It's the Medal of Honor level Heroism of doing something that is very likely to get you and yours killed or enslaved, but you do it because it's the RIGHT THING.

BUT WE are Law abiding and THEY Write the Laws (sort of like what England did for the Colonies).

Note well the Founding Fathers HAD a working colonial government of sorts. They did NOT have a massive welfare system to drain their pockets.

And the population MOSTLY Fed themselves or at least KNEW the Farmers that fed them.

THOSE are part of the problems we have and thus the Powers that Be feel they have us by the balls.

Look to what the Irish had to do under the Leadership of Michael Collins and look up how many YEARS that took. Western Rifle Shooters has an Gab article about it.

Protect your families, even more troubles coming our way. Trusted friends is far more important than most things we yap about on the internet.

There is no doubt given the interstate nature of this fraud and the coordination required, that the Dept of Justice should be using RICO statutes to prosecute these crimes. But... crickets. Nothing. Not even from the Republicans.

The Ukrainians had TWO color revolutions over election irregularities that were nothing as egregious as this, with nowhere near the proof. We should be giving the administration ONE chance to hold new elections, peacefully, in November. There is time. Since there is no movement on this, I presume they will memory hole it and we will see nothing. That is a mistake.

I can see Civil War 2.0 on the horizon if we don't get this addressed.

Jeff the 3 letter agencies of the United States of America DID the 2 Color Revolutions in Ukraine.

They are well on the way to finishing a Color Revolution INSIDE the United States of America.

Did I really hear you say "Vote HARDER"?

Our founding fathers have disowned us.

Anyone with eyes to see could see the stealing of the election in 2020. I actually had my mags loaded and bags packed thinking that surely the patriots would stand up over this and I would be joining them, but…..nothing happened. I lost a lot of hope for this country.

We all knew this almost immediately. Trump knew it too and backed down.