I came across this tweet from RoosterFJB the other day.  I can't find it today, which leads me to suspect it may have been deleted:  but fortunately I'd already saved a screenshot. 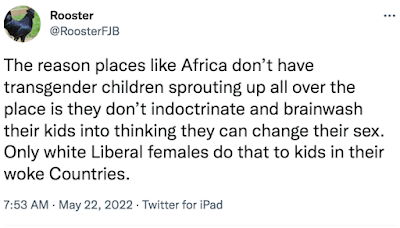 Absolutely true, IMHO, based on decades of experience in most of sub-Saharan Africa, and two-and-a-half decades in the USA since then.  Transgenderism is not, repeat, NOT a major worldwide problem.  It's only a big problem in this country, where demented dunderheaded progressive liberals have brainwashed themselves - and the poor children under their care - into believing that it's a thing.  There are, indeed, true transgendered individuals (the phenomenon known as intersex - see one such person's story here;  it's very interesting reading), but they're a tiny minority (usually calculated as less than one-tenth of one per cent of the population).

Also, let's not forget that much of the pressure to have kids think they're transsexual is nothing more or less than sexual predation by others.  As Divemedic points out:

Children who are emotionally, sexually, and mentally abused or those who receive emotional trauma during these formative years are those who go on to experience mental health issues as adults. This is why allowing teachers to push these alternative roles upon children in the age groups from Kindergarten through seventh grade is so damaging to children.

This is also why there are teachers who are fighting so hard for access to children in this age group. It is access to young children that allows them to build the next generation of adults with misaligned emotional and psychological compasses.

There's more at the link.  I entirely agree with him.

Basically, in most cases, one can be fairly sure that the individual wondering whether they are, or claiming to be, transgendered is nothing of the sort.  The few genuine cases (I know three such individuals personally) have to cope with a burden I'd hate to carry, and I can only salute their courage and determination.

"The few genuine cases (I know three such individuals personally) have to cope with a burden I'd hate to carry, and I can only salute their courage and determination."

So, you support these persons' mental illness because its symbolic of their struggle agains reality?

@Anonymous White Male: If you read the article, you'd note that there are genuine cases, as well as the widespread mental delusions about it. I know three genuine cases, and I support them because I know that they're genuine. I'm not indulging "mental illness" at all. If you can't wrap your head around that, it's not my problem - it's yours.

Them: "The rise in trans-genderism isn't a social contagion."

Me: I must have missed when they fixed peer pressure. Or was it totally natural for women in the 70's to get Dorthey Hamills haircut?

"If you can't wrap your head around that, it's not my problem - it's yours."

First of all, you have no idea what goes on in your "friends" heads. I'm sure there are those that believe that gravity is a social construct and they can walk off a cliff with no consequences. They will be proved wrong. You are of the "compassionate conservative" school of political behavior. "Compassionate conservatism" hasn't conserved anything. It can't because you are more concerned with being seen as compassionate than you are with right and wrong.

When my daughter was still in a brick & mortar school and riding the bus, she was considered a little off because she does not identify as anything other than Female, and uses she/her pronouns. The majority of people on her bus (in damn-near rural, Trump signs never taken down, North Florida) either had alternative pronouns, or had a professed identity or orientation other than standard.

This is 100% social contagion.

Peter and Anonymous Male and Lady:
I respectfully suggest the watching of the Frontline Program, "Growing Up Trans". from Season 2015, Episode 11.
[Although 1 hour 24 minutes long, . . . try at the very least watch the first 30 minutes].
Then tell me if you believe what you wrote, or if it changed in anyway.
Thank you.
https://www.pbs.org/video/frontline-growing-up-trans/

I see this in the Philipines. there was zero trans/ladyboy/bakla stuff around and even abouve the age of 30 you seldom see any. this really only started when it got popular on TV and several Filipino celebs went to hollywood and were totally screwed up by Ellen Degeneres, and the Disney thing. The TV changed from men in drag as a joke and funny to men in drag as something to be eulated. Even the tattoos, pink hair, etc are now common here. Try 15 years ago, the only person with tattoos was a convict. The only girl with pink hair was going to a Halloween party.

It really is that simple.

my opinion is useless but here it is anyway
if westerners had to actually get up at dawn, hoe a field of corn, feed animals, pray for no hail and no locusts and enough gentle rain and live on what they could raise with their own hands none of these pretend 'problems' would ever even be thought of
idle hands = 'devil's workshop'
humans will get into mischief it is their nature
scrabbling a living from the earth and uncooperative mother nature would instantly erase all the nonsense

I have stated elsewhere that when this "transgender" craze is over, there are going to be some absolutely resounding lawsuits, against surgeons who went ahead with the operations (which, among other things, permanently sterilize their victims) and "therapists" who convinced very troubled, very suggestible people that their problems were rooted in "being in the wrong body," and that "gender change" would solve all their problems. Instead, sur-PRISE, sur-PRISE, sur-PRISE, not only did "transitioning" not solve their problems, but now they have a lot of complicated medical regimen to keep up for the rest of their lives! There are good reasons why the suicide rate among post-op "transsexuals" is much higher than average.