The brouhaha over Roe v. Wade

So "somebody" leaked a draft Supreme Court ruling (not yet final, and not yet in effect) about Roe v. Wade.  Predictably, the progressive left is in an uproar;  the more progressive, the more "up" their roar is.

This is manipulation, clear and simple.  Somebody leaked this document knowing that it would produce an emotional, visceral reaction on the left that would overwhelm thought, logic and reason.  You might as well call it re-programming the sheeple to focus on a new target.  As a Gab meme puts it: 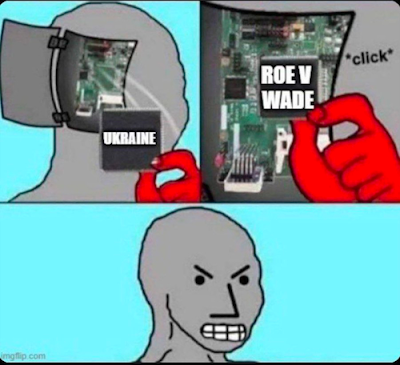 The SCOTUS leak is an actual insurrection. An attempt to completely upend and delegitimize the rule of law, incite violence and chaos, and potentially plunge the nation into civil war. January 6th was a stroll in the park compared to this. It's not even close.

Liberals leaking a SCOTUS decision to pressure the justices to change their mind is an attack on our system 100000000 times more serious than the Capitol riot. This is why you should never listen to these fraudulent assholes when they prattle on about "saving democracy."

Who did it?  We'll probably never know, although the initial leak had to come from a Supreme Court staffer, possibly working for one of the liberal justices.  Suffice it to say that the progressive left has jumped on it with both feet, and are going to use it to whip up support for all they (and it) are worth.

Bear in mind that the proposed SCOTUS ruling does not ban abortion - no matter how the left tries to portray it.  It simply overturns what has been known by legal scholars for decades to be a very poorly argued and legally unstable court decision.  The abortion issue will be returned to the states of the Union for each of them to make its own decision about whether or not it's legal, just as should have been the case from the beginning under the Tenth Amendment to the constitution.  In some, possibly many, states it will remain legal, or be officially and legislatively legalized.  In others, not.

Unfortunately, those of us who value the rule of law, and who are going to try to approach the issue from that perspective and discuss it on its merits, are going to be drowned out by an hysterical chorus of "Women's rights!  Reproductive health!  Patriarchal oppression!" and so on and so on ad nauseam.  The progressive left will approach it on the basis of emotions and "feelings" rather than facts and law.  It will become (they are already using it as) a primary tool to energize their base to get out and vote in November, which they hope will swamp the re-emergent conservative right in a tidal wave of outrage and defensive voting.

For the progressive left this is all about politics, pure and simple.  Justice and law have nothing to do with it - just like the lives of the unborn that are slaughtered by the millions every year in abortion clinics.

The protesters with the pre-printed signs were out en mass within 30 minutes of the news breaking last night. Planned Parenthood had just announced 150 million dollars for the mid-term elections. Talking points were all ready for the MSMs early morning "programming".

It's the only issue that they can use to get their base of woman voters to show up for the mid-terms.

On the flipside, it shows the weakness in trusting the "Just-us" system.

Well the shrills on the Right are screaming about this too.

They're worked up that this will lose them their victory this fall.

And how no one really cares about this, only religious nut cases that lose them every election.

Only taxes and gun control they say we should focus on.

Whenever and however invading private lives of citizens
is "justified" we have a problem of government (any/all)
overstepping bounds.

FYI the constitution only specifies what natural rights
people possess and cannot be overridden. That does not
hand cart blache to the states.

Patriarchal oppression built Western Civilization and created all the liberties its rejection by the left is destroying.

@Eck. You have our government completely backwards. The States created the federal government and gave them specific, limited, enumerated rights. ALL others belong, per 9A and 10A to the States. Of COURSE the States have "carte blanche" within the - very few - limits of the Constitution. We have a FEDERAL, not a NATIONAL government. It gets to do ONLY certain things. Among these are NOT abortion, healthcare, marriage, bathrooms, gender, pronouns or disinformation.

If a girl wants to have an abortion there's nothing I can do to stop her. The aftermath is between her and God. My beef is that MY TAX DOLLARS subsidize MURDER!

Do we know if this document is even real? It could be completely fake, written by somebody familiar with the legal system and court briefs.

Sources are pointing to Sotomayor's magic dirt clerk Amit Jain... Methinks a deportation hearing may be in his future...

This is for the suburban Karens who voted the wrong way in Virginia because of the school board grooming. This mobilizes them to vote the other way in November to preserve much right to kill my unborn kids

The sooner the better. Internet memory is short.
Let's have the October surprise in May.

How about Supreme Court Justice Stephen Breyer he has nothing to lose and everything to gain. Let the people scream and yell about this but the Supreme Court should continue on with what they were doing giving back to the states.

It's just another layer of winning.

Now the Roe v Wade and associated decisions are being overturned, which then brings the fight back to the state level ... where the pro-life crowd have already been extraordinarily successful.

More winning, and we're not tired of winning yet. Look for a SCOTUS Justice resignation over a scandal, of which this intentional leaking may well be the trigger.

The tears of the extreme left are like wet fireworks. Their anger and outrage is spectacular but fizzles amongst themselves.

The "horror" of abortion getting banned outright in 37 states, enshrined as a sacrament in 5-10 others, and the left having to fight battles state-to-state, and losing, for centuries, has them all conflusterated.

Issue the ruling, and let the chips fall.

Shrieking moonbats are their own best ambassadors.
For losing, forever.

Tear their masks off forever: Bring it on.

WHAT??
No discussions about birth control?
Do the industries not manufacture contraceptives anymore?
Why are all these women allowing themselves to get pregnant in the first place?