A fascinating discussion between two leaders in their fields

Many of my readers are doubtless familiar with the books of Steven Pressfield.  He's one of the premier historical novelists in the field today;  his breakout second novel, "Gates of Fire", went onto the Commandant of the US Marine Corps' reading list, is used as instructional material in several US military academies (including West Point and Annapolis), and is regarded as one of the finest military history novels of the last century. 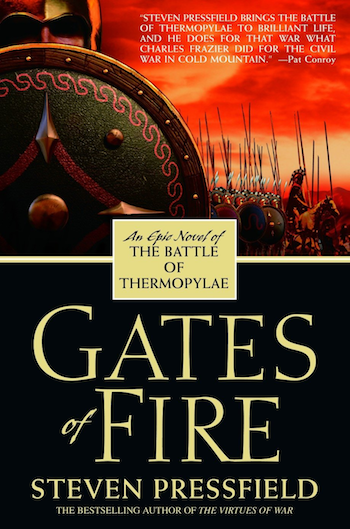 Many readers are probably also familiar with Clint Smith, retired USMC Lieutenant-Colonel, Vietnam veteran, and firearms and security instructor par excellence.  He and his wife own Thunder Ranch in Oregon, which is one of the top defensive shooting schools in the nation.  I took two courses (handgun and rifle) at the previous incarnation of Thunder Ranch in Texas, and thoroughly enjoyed them.  Clint is notoriously outspoken, not pulling his punches or trying to be politically correct.  To use a Britishism, he "calls a spade a ****ing shovel", and is bluntly realistic about the life-or-death realities of self-defense.  He's famous for quips such as these:

"If pointing an empty gun at your opponent makes him duck, you may live for an extra two seconds-and who knows? I may find another gun, the bad guy may give up, or the ammo fairy may drop me a magazine."

"If we’re going down a hall and I see the end of a double barrel shotgun, I better communicate to my partner, ‘cause I can be pretty sure it’s not the Easter bunny on the other end."

"You can say ‘stop’ or ‘alto’ or use any other word you think will work, but I’ve found that a large bore muzzle pointed at someone’s head is pretty much the universal language."

Speaking from my own, much more limited experience, I can only say he's not wrong!

Steven Pressfield went to Thunder Ranch last year for some shooting instruction, and needless to say, he and Clint Smith found they had much in common.  They recorded a podcast together, which turned into a wide-ranging discussion of numerous points and issues.  I found it very interesting, and I hope you will too.  It's a little over an hour long.

What is truly scary, in this world of technology, he now becomes a target from something he may never see but certainly would take his life.

That was interesting! Thanks!!!

When shopping for books, consider using abebooks.com
It still serves as a sales BBS / board for (mostly) independent booksellers.
Prices are usually better that Amazon used, or Alibris, which is now an alternate corporate owned outlet.
John in Indy