Looking at the state of the country, I'm reminded more and more of an English proverb that my parents drummed into me when I was growing up:  "Look after the pennies.  The pounds will look after themselves."  It referred to money (English currency), and basically said that if one doesn't waste pennies (i.e. small amounts), but saved them, one would soon accumulate a larger sum of money.  Some would call that miserly;  others, frugal and sensible.  YMMV, of course.

I think there are parallels between government agencies and that proverb.  Many (most?) national government agencies appear to be spending money like there was no tomorrow, wasting billions on fruitless projects that have never produced the desired result over years or even decades of effort, but which they continue to fund, doubling down on failure.  They aren't looking after the pennies at all;  therefore, the pounds of taxpayer money we entrust to them are being frittered away uselessly.  They're also using that taxpayer money unwisely, splurging it on politically important projects while ignoring our domestic needs.  This meme from last Monday's collection makes that point very well. 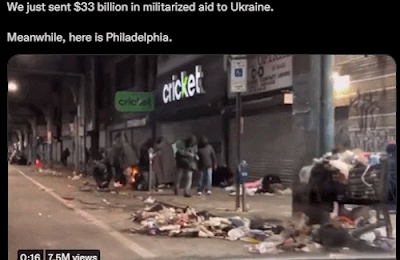 Many headlines make the same point in different contexts.  A few recent examples:

From that last report, here's a chilling quote.

These are the basic services every community needs:  fire, ambulance, law enforcement - yet almost all of them, in almost all our communities, are under-funded, under-resourced, under-emphasized.  Politicians, from local to regional to national, are great on pontificating about major issues or politically-correct subjects:  but they aren't much good at making sure that emergency response services are adequately staffed and equipped, or that the citizens they're supposed to serve are, in fact, being served properly.  As another meme from a few weeks ago reminds us: 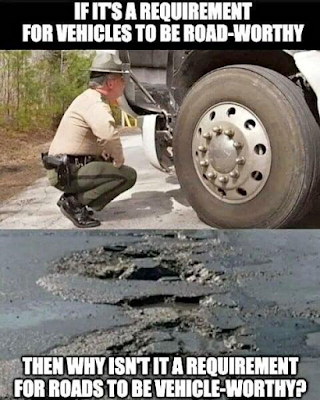 It should be a requirement:  and, if local governments were doing their job, it would be a requirement.  The fact that in so many cities and towns, road maintenance is conspicuous by its failure is an indictment of their governments, and the local and state politicians who should be taking care of the problem.  Instead, the burden is shifted onto the shoulders of motorists and their insurance companies, who have to pay for the damage caused to vehicles by local government's failure to do its job.

Nobody's paying attention to the small stuff anymore.  Nobody's looking after the pennies.  As a result, the small problems of everyday life get magnified until they're big problems;  and the pounds (or dollars) we should be saving are frittered away, because instead of fixing small problems at low cost, we ignore them until they're big problems, that require a huge budget to fix - or pretend to fix.  Many times, the big projects don't work, or aren't properly planned and conducted, or are treated as a cash cow by corrupt politicians, unions and contractors . . . and so we go on throwing good money after bad.

Maybe we need to start locally, and work our way up to national issues.  Maybe we need to begin by saying to local politicians, "Do your job!  Fix what you're supposed to fix, and stop wasting time, money and resources on problems you can't fix because they're above our local pay grade."  Then, when politicians want to move on up to state level, we can say, "Did you do your job locally?  Did you take care of the pennies?  If you didn't do that locally, the odds are you won't do it at state level either."  It would be an excellent sorting device as to who's worth our vote, and who isn't.  The same would apply when they run for higher office, regionally or nationally.  If someone wants to be our Governor, or Congressional representative, or Senator, we can ask about their track record in prior office(s), the pennies-and-pounds evidence of whether or not they're worth trusting.

In fact, we could include their personal finances as a yardstick against which to measure them.  Are their personal and/or family budgets balanced?  Are they hopelessly in debt, or in good financial shape?  If they can't manage their own affairs well, what are the odds that they'll manage our city's, or state's, or country's affairs well?  If they claim privacy as a reason to keep their personal finances confidential, point out to them that they're expecting us to trust them with our money;  therefore, we want to see what they're doing with their own money before we trust them that far.  I don't think that's out of line.  Certainly, if they're living with massive credit card balances, juggling one against another to pay the bills each month but never clearing them, I don't want them doing the same to government budgets!

Another yardstick might be personal wealth.  I have no problem with someone earning an honest living, and becoming rich through his or her own efforts.  That's praiseworthy, IMHO.  On the other hand, a politician who goes into politics with relatively little, yet accumulates thousands or millions of dollars while in office, is automatically suspect in my book.  Where is the money coming from?  He or she had better be able to account for every penny - and none of it should involve taking advantage of their position, like stock tips or "re-election contributions" that end up in their personal accounts.  At the first sign of such shenanigans, I think the politician(s) concerned should be removed from office and prevented from ever running for elected office again.

I daresay it's because we don't do any of that, but simply accept the candidates foisted on us by faceless party committees, that we're in the mess we're in today.  If we got rid of every single Congressional representative and Senator tomorrow, and chose their replacements on the basis outlined above, I think the country as a whole would be dramatically better off - no matter which political parties were involved.

What say you, readers?  A pipe dream?  Or a potential solution?

It's a problem that will only be solved by liberal use of gibbets.
Nothing less has ever worked.

Good post, Peter. I hope you don't mind me quoting it, with attribution, of course.

I lay the "pennies & pounds" problem squarely on us, the voters. We made a decision in the 60s and 70s, that the proper function of government is to manage people's interpersonal lives and relationships. In my (minority) opinion, decent roads, water, and sewers for all citizens do far more to promote "equality" than all the transfer payments we've sacrificed on the alter of reparations.

The problem lies squarely at the feet of the people. We can complain about the government all we want; but the fact of the matter is we just had our annual referendum on the town budget. There were some interesting things in that budget... Town of 6,000 voters. 304 people actually voted. I have no doubt the other 5,696 will complain vociferously about things.
It would be 'easy' to fix if the problem was in fact the government; Aesop's solution or voting them out or firing them. But when the citizenry (not sure that term applies, populace is better) won't get off their rear ends to vote, they certainly aren't going to get off their rear ends to do anything else.

Well said! I shall be forwarding it to my family members.

Your quote about the lack of response to the 911 call should alarm every reader. It shouldn't be a surprise, but rather should prompt all to prepare for known medical issues as well as any emergencies that could arise. Like with law enforcement, when seconds count ambulances and doctors may be hours away. On top of that, the vast majority of medicines and medical supplies come from China. Get them now, before it's too late.

This is your problem.

Nothing pisses me off more than driving (or riding my bike) on crapped up roads. We pay fuel taxes, and vote for bonds to pay for maintenance, which never happens.

The problem here is local gubermint is boring. These fools get elected to 'save the world' when the actual job is to make sure streets are maintained, water is distributed, sewage removed, trash picked up, fire and police staffed and trained.

We don't have money for these things but can fund trannie reading days at the library.

And there's nothing I hate more than a career politician. Came out of college, worked for this or that campaign then ran themselves having done diddly and squat before.

Bernie and Biden are the worst examples. Its' all grift, pure and simple.

Note also that these similar to the instructions God gives the churches concerning their choices of pastors. bible: 1 Timothy 3.

It's only been in the last six years that my Montana town started plowing residential streets after heavy snow. Didn't really bother me since I figured it discouraged the riff-raff. Only when I learned that it'd cost me $5 a year extra in taxes to plow did I realize just how parsimonious our city fathers were. Of course, now I have to wonder if the flood gates will open, driven by newcomers bent on recreating the hell holes they left. Note, I only actually saw a plow in my neighborhood once this past winter.